Afghanistan's First Cosmonaut to Sputnik: 'In Time of Danger, We Told Jokes'

Last month, Afghans celebrated the 29th anniversary of the flight of Abdul Ahad Mohmand, Afghanistan's first and only space-faring cosmonaut. In an exclusive interview with Sputnik, Mohmand shared new details about his daring mission.

In late August 1988, less than half a year before the last Soviet troops departed from Afghanistan, the Soyuz TM-6 spacecraft carrying Mohmand and Soviet cosmonauts Vladimir Lyakhov and Valery Polyakov blasted off into space and headed to the Mir space station. Their mission, running from August 29 and September 6, was carried out under the Soviet Interkosmos program, which allowed the USSR's allies and partners to send their cosmonauts into space.

Moscow and Kabul agreed on a joint Soviet-Afghan mission in 1987. A year later, Mohmand became his country's first space traveller. Mohmand and his backup, Mohammed Dauran, were selected for the flight from among a group of 400 volunteers. In 1987, he graduated from the Gagarin Air Force Academy in Moscow region.

Born in 1959 in Ghazni province to a peasant family, Mohmand went on to graduate from the Kabul Polytechnical Institute. After Afghanistan's April 1978 Saur Revolution, he was sent to the Soviet Union to study at a military aviation school. Upon his return, he served in the Afghan Air Force, where he was promoted to the rank of captain.

Speaking to Sputnik, Mohmand recalled that he had long dreamed of flying high above the Earth. "When I was a teenager, I often looked up at the sky. I watched as passenger planes flew by and thought 'boy would it be great to be up there'. Time passed, and my dream came true."

On August 29, 1988, Mohmand and his Soviet comrades blasted off from the Baikonur Cosmodrome and flew into space. Sent to conduct research aboard Mir, the cosmonaut brought an Afghan flag and two copies of the Koran onboard with him. Mohmand told Sputnik what he remembered best about his mission.

"Our flight lasted 8 days, 20 hours and 26 minutes. During the flight, I took pictures of Afghanistan's terrain to study mountain ranges, water resources and areas of seismic activity. The view of Earth from Mir's porthole brought me enjoyment incomparable to any other. Nowhere in the universe is there a planet that compare in beauty as our planet Earth."

"When we arrived on the space station, I took a look at Earth, and thought that this planet truly is our one and common home. It belongs to all of us and we all need to live in peace."

"And I remember that the president of Afghanistan Mohammad Najibullah* phoned me and said that he dreamed of seeing Earth from space," Mohmand added.

*Editor's note: President Najibullah was tortured and killed in 1996 by Taliban militants after being dragged out of a UN compound, four years after being ousted by US-supported Mujahedeen rebels in 1992. Boris Yeltsin's Russian government cut off all support for the Afghan government after the Soviet collapse.

© AP Photo /
German Cosmonaut Sigmund Jahn on Sputnik-1's Orbit: 'We Must Protect Our Planet'
On September 6, 1988, Mohmand and Lyakhov left Mir aboard the Soyuz TM-5 spacecraft and began their decent to Earth. During the flight home, the ship's computers gave out. Ground control attempted to reprogram the system, to no avail. Mohmand recalled the harrowing incident:

"We were forced to remain in orbit over the planet for over 24 hours in a tight compartment, without food, water, or the opportunity to go to the bathroom. Earth watched our flight with a growing sense of concern. We passed the time telling each other jokes. Finally, the computer systems were restored and we were able to land safely in Kazakhstan." 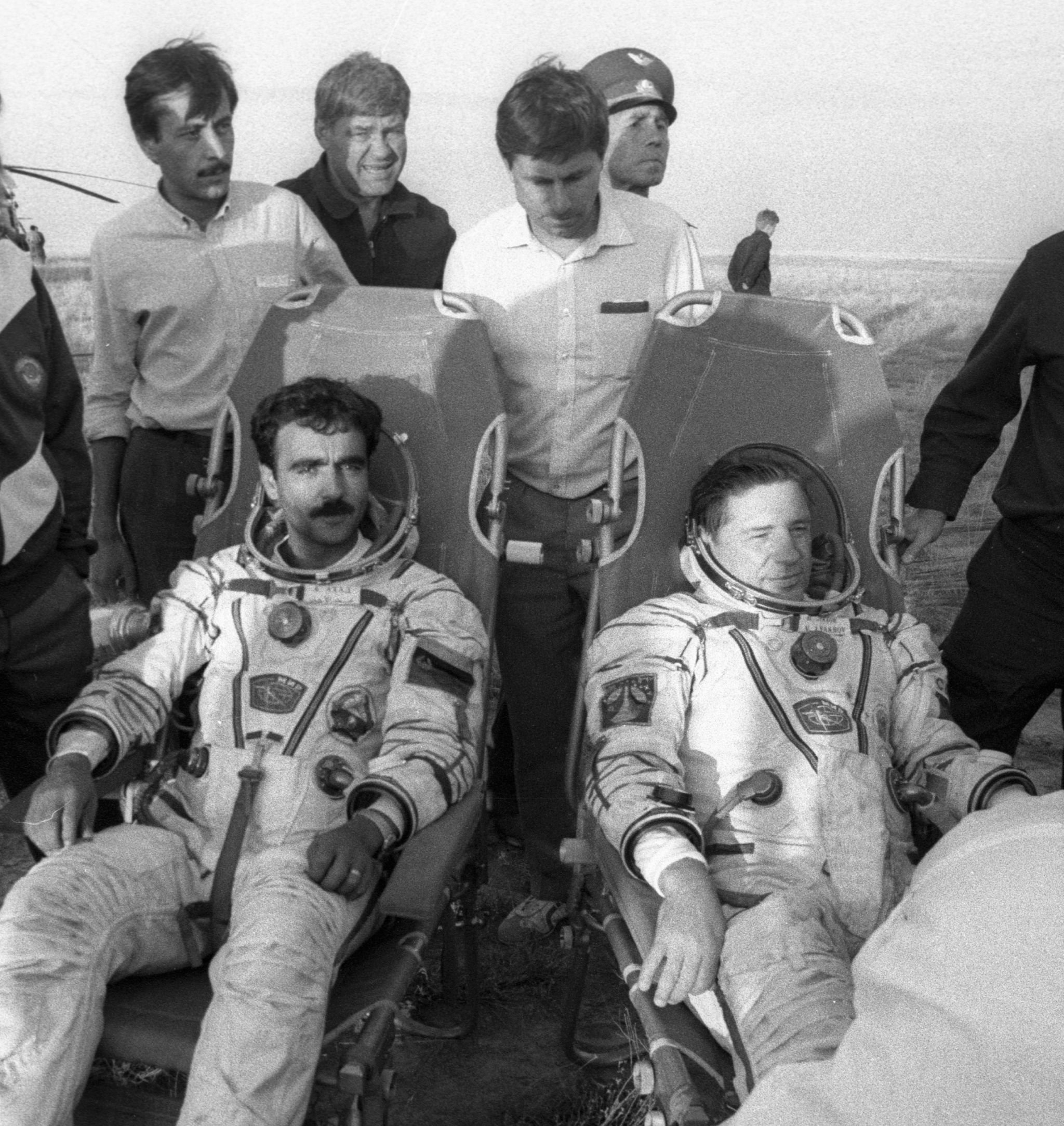 Soon after, Mohmand recalled, he went home, where he received a warm greeting at the Kabul airport. For his exploits, he was awarded the title of National Hero of Afghanistan by President Najibullah.

© Photo : Roskosmos
Dawn of the Space Age: Story of Sputnik-1, Earth's First Artificial Satellite (PHOTOS)
Unfortunately, a few short years later, the situation in his home country changed for the worse, and Mohmand, his wife, two daughters and son fled the country, settling in Germany.

Mohmand returned to his homeland in 2013 for the 25th anniversary of his historic flight. He was met by President Hamid Karzai and other officials. During the meeting, the cosmonaut read the same message he had to his fellow Afghans 25 years earlier:

"Afghans! Take your neighbor by the hand; put aside your arms. Let us resolve our problems through dialogue, and show respect for one another. Then, our problems and misfortunes will leave our country and our children will be able to sit at school desks, and be educated for the good of the country."

His message rings as true today as it did nearly three decades ago.