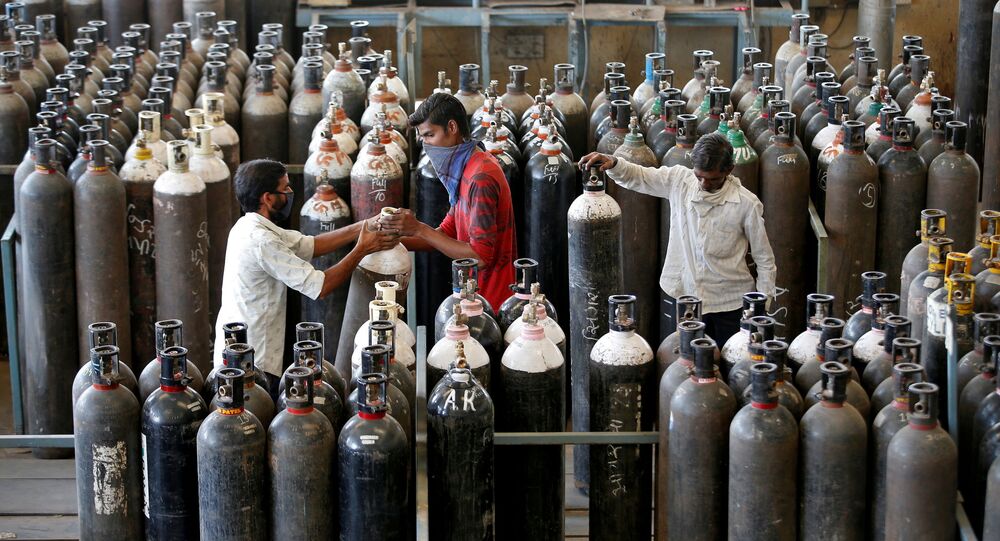 A devastating second wave of COVID-19 killed tens of thousands of Indians between April and May 2021. At the time, several Indian hospitals tweeted SOS messages to alert the government that they were running short of medical oxygen. Photos and videos from overcrowded hospitals showed how Indians were struggling to breathe.

Delhi Health Minister Satyendar Jain has lambasted the government for claiming that there have been no deaths caused by a shortage of oxygen in India.

"[The central government] will soon say there was no COVID-19. If there were no deaths from a lack of oxygen, then why were hospitals going to High Courts complaining of shortages? This government's claim is completely false. Oxygen shortage led to many deaths in the country, including in Delhi," Jain said, addressing Indian media.

On 20 July, Prime Minister Narendra Modi's government told members of the sitting Monsoon Session of parliament that no lives were lost because of a scarcity of oxygen in India.

​The statement has caused a major uproar in the country.

"Is this a joke? Forget about apologising for major mismanagement of COVID-19 resources and ill-preparedness to tackle the wave, they are now denying that nobody died because of oxygen shortage? I sat helplessly as my father breathed his last before my eyes on 26 April. The hospitals refused to admit him because they had too many patients and too little oxygen. The shortage of oxygen was so crippling that despite barraging vendors with orders we could not manage to arrange a cylinder on time. I am just shocked by this government's insensitivity. Hospitals were sending out SOS signals," 21-year-old Piyush Singh from Delhi told Sputnik.

Urgent sos help. We have less than 2 hours of oxygen supply @Moolchand_Hosp. We are desperate have tried all the nodal officer numbers but unable to connect. Have over 135 COVID pts with many on life support #. @ArvindKejriwal @CMODelhi @LtGovDelhi @satinderjain26 @PMOIndia 🙏

Hospitals across India are now relaying SOS messages for oxygen

That's because the country has a dire shortage of medical oxygen. It isn't just a problem of logistics

​"I was desperate to get oxygen for my mother. The hospital she was admitted to asked us to arrange for oxygen because, according to them, their facility was running out of it. I ended up getting duped of INR20,000 ($270) by a fraud pretending to be an oxygen vendor. My 22-year-old brother had to travel kilometres away to these oxygen distribution centres and stand in a long queue for hours. Some days he managed to get cylinders, other days he returned empty-handed. Our mother's condition kept worsening and she dies on 24 April," 28-year-old engineer A Kataria from Gurugram, in the northern state of Haryana, revealed to Sputnik.

On Tuesday, govt told Parliament “no deaths due to lack of oxygen have been specifically reported” by states or UTs.
In May, The Indian Express had profiled lives lost for the lack of oxygen in various parts of India. Take a look https://t.co/AvzMgjjZMH pic.twitter.com/pQIGEQcYdC

​On 5 May, India’s Allahabad High Court also accused the Indian authorities of being part of a "genocide" for failing to ensure a robust oxygen supply chain to COVID-19 facilities.

Responding to the furore, the federal health ministry told the Upper House in a written statement that it had not received any information from states about COVID-19 patients dying in hospitals from a lack of oxygen.

Putting things in perspective, Delhi-based Dr SCL Gupta, medical director at Batra Hospital has said that doctors do not mention the cause of death as "shortage of oxygen" but instead put "cardio-respiratory failure".