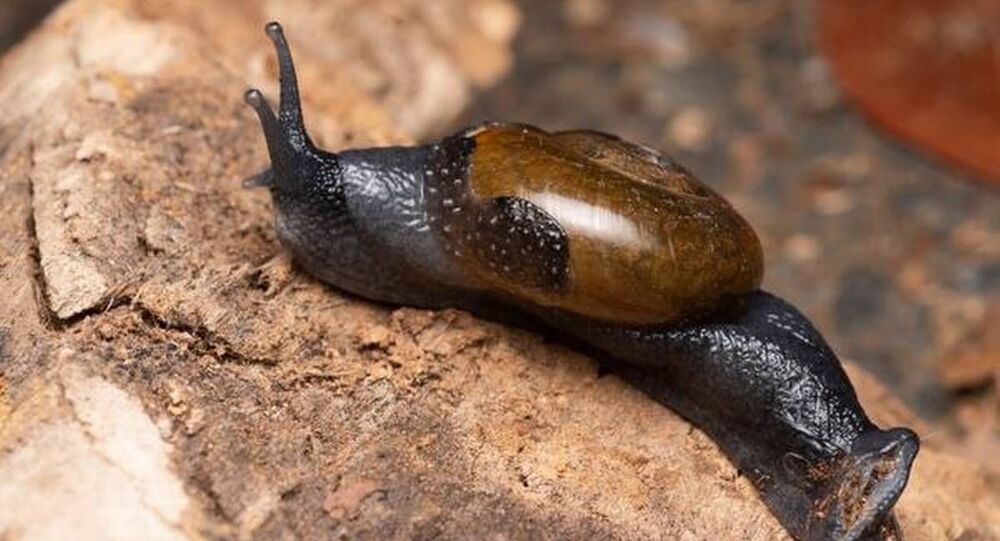 The newly discovered snail genus Varadia from Amboli hill station in India’s Maharashtra state is reported to be at a high risk of extinction because of gradual loss of habitat. Most active at night, Varadia is 7cm long and feeds on leaf litter, insects, and other small creepy crawlies.

A group of scientists achieved the ultimate goal on Wednesday as they discovered a unique snail genus and species from Amboli hill station in India’s Maharashtra state.

The snail genus has been named 'Varadia' after scientist Dr Varad Giri, a renowned herpetologist and a senior scientist at the Bombay Natural History Society (BNHS).

"The snail species has been christened 'Varadia Amboliensis' as a tribute to the small and picturesque Amboli village where it was discovered in natural jungles near the Hiranyakeshi Temple (in south Maharashtra)," lead research scientist, Dr Amrut Bhosale, told Indian newswire IANS.

What sets Varadia apart from other Indian "semi-slugs" is its external appearance, shell, reproductive system, and other features which are unique, Bhosale added.

"This semi-slug is a member of the eupulmonate molluscan group stylommatophora, which is indigenous to the northern and central parts of Western Ghats mountain range which has been declared a UNESCO World Heritage Site. They are called semi-slugs rather than snails because their shells are relatively small compared with their body, and the shell is often partly or almost completely covered by the snail's skin or mantle, which is also retractable," Dr Bhosale said.

An unknown but unique snail genus and species -- considered as "new to science" -- has been discovered from Amboli in Sindhudurg district in the Western Ghats and has been named after a #Mumbai-based scientist, excited researchers said in Mumbai on Wednesday. pic.twitter.com/908uGwkQkt

The study also indicates that the DNA analysis of the species is "new to science".

This five-year-long detailed study was published in the European Journal of Taxonomy and was conducted by a group of researchers and experts from India and abroad who revealed that the new snail so far has been recorded as existing in only five places in the states of Maharashtra, Karnataka, and Goa. They added that it is at high risk of extinction because of a gradual loss of habitat.

Commenting on the discovery, Dr Varad Giri, who also has a reptile named after him, 'Dendrelaphis Girii' also known as Giri's bronzeback tree snake, said: "The discovery of this large and striking snail emphasises the urgent need for a detailed and wide-ranging survey of the snails and slugs inhabiting the Western Ghats which are still not known to science."