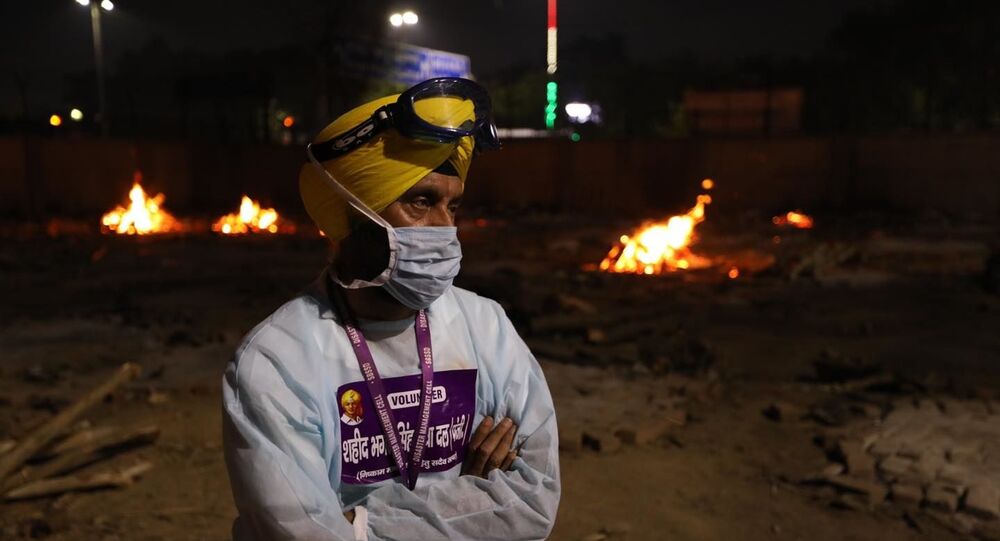 The Indian capital was devastated during the second wave of the coronavirus this spring. From limited resources to the availability of funeral spaces, it was much worse than before. However, individuals like Jitender Singh Shunty came forward and worked round-the-clock to help those in distress.

The coronavirus pandemic has only amplified the grieving of those who have lost relatives. The strict rules and precautionary measures don't even allow the family to properly bid a respectful goodbye to their loved ones.

The peak of the second wave during April-May showed this to the hilt when families even struggled for the 'opportunity' to cremate their family members in Delhi and other places.       ,

However, the work of individuals like Jitender Singh Shunty has ensured that almost every recently departed person gets a dignified cremation. Since March of last year, Shunty through his NGO Shaheed Bhagat Singh Seva Dal, has been cremating the bodies of COVID-19 patients. He says that to date, they have cremated over 2,600 virus-infected bodies.

But it's not that Shunty took to this work only during this COVID pandemic. The former Delhi Bharatiya Janata Party (BJP) lawmaker and his NGO Shaheed Bhagat Singh Seva Dal have devoted their last 25 years to cremating unclaimed bodies in the city.

When the pandemic wreaked havoc in the country, Shunty and his team members continued to ferry and perform last rites for bodies who had no relatives to take care of them.

He has also received Padma Shri, India's fourth-highest civilian award, for his selfless service throughout the pandemic. During the incessant rise in COVID-19 cases and deaths during the second wave of the pandemic in India, Shunty continued helping the people in distress despite his own family being infected.

During the first wave, Shunty and his family were infected by the coronavirus. But it didn't break his spirit and he continued to ferry patients and conduct the funerals of dead bodies.

Sputnik reached out to the social worker to discuss his life, work, and challenges related to his unique endeavour.

Sputnik: You are the founder of Shaheed Bhagat Singh Seva Dal, an NGO that helps to cremate unclaimed bodies. What inspired you to take to this work at the outset?

Jitender Singh Shunty: I started this NGO in 1995. It all started when I saw a man, who did not have any money for the funeral of his child. He was picking up burnt logs of wood from someone else's pyre to use for cremation. I felt it was happening in a city where so many people live in houses worth millions of rupees but nobody can help a person who needs a funeral. It broke my heart.

We helped him cremate his child's body and decided that we will help everyone in Delhi facing a similar challenge. With the passage of time, we adopted 17 crematoriums and started providing cremation services free of charge. We also provided ambulance services for free. Now we have 18 hearse vans. So far we have cremated over 44,000 dead bodies in all these years.

Sputnik: You have been working and helping COVID patients and their family members since the beginning of the pandemic. How did it all start?

Jitender Singh Shunty: When the pandemic began, the District Magistrates of North Delhi, East Delhi called me and sought my ambulances and services. So, I decided to step up. A lot of people advised me that I shouldn't do this as I may die. But I was determined. I have been serving for 25 years and when the country is going through tough times how can I say no? During the first wave, I lost one of my drivers too. We got infected too but we didn't stop helping people.

Sputnik: What challenges have you faced since the beginning of the pandemic?

Jitender Singh Shunty: I did face several challenges. People used to say these people roam around Shamshan Ghat (crematorium), they shouldn't be allowed to enter the residential society and building. Some people misbehaved too. When we used to come, people used to shut their shops and go away. We didn't say anything to these people, we just kept working. We haven't taken any help from the government. Rather, we have helped them.

Sputnik: Such things take a toll on one's mental health. How are you handling all this and what is the impact of it on your family?

Jitender Singh Shunty: Initially, it used to affect me a lot. So many people still ask me 'Sir don't you get scared after seeing dead bodies?' I say the ones who are alive are more dangerous. I am not afraid of dead people. How can I leave them when their own family members or loved ones have left them? When people die at home there is no one to pick them up or cremate them. We have picked up over 800 bodies from their homes.

We are zealous about our work, just like freedom struggle icon Bhagat Singh. Except for me, my whole family got infected again. I didn't go home for 22 days and I used to sleep in one of my ambulances either parked outside the crematorium or our parking.

Sputnik: Your whole family was COVID positive and you lost your colleagues too. Yet you are serving the people. Aren't you still afraid of it?

Jitender Singh Shunty: No. I was never scared. I am mentally determined that people are also dying while sitting at home. So, why shouldn't I keep doing the work that I have been doing for the last 25 years and die doing that work?

Sputnik: You were recently conferred with the coveted 'Padma Shri' award for your tremendous hard work throughout this pandemic. How did you feel?

Jitender Singh Shunty: With God's grace, I have been praised for my work since the beginning. In 2006, after Outlook magazine wrote an article on me, some US-based filmmakers reached out to me and made a documentary called 'Angels for the Dead' about me. They also won a gold medal for the documentary at the Georgia Film Festival. People have recognised my work and respected me.

My name also featured in the Guinness Book of World Records in 2019. My younger son is also following in my footsteps and helping people. My family supports me. I feel my life-long hard work is finally bearing fruits.

Sputnik: You have been at the frontline and witnessed both the waves of coronavirus. According to you, what went wrong?

Jitender Singh Shunty: I don't know about other states but in Delhi, the state government has completely failed the people. The whole system was a 100 percent failure. Nobody learned anything from last year. The government was not at all prepared. It was so sad they didn't even have prepared mortuaries, beds, oxygen anything. This is the reason that led to people dying on the road or in their cars. The situation is much better now. Back then deaths were unreported. The lies of the government are so easy to catch now.

In the last 10 days, we just had three or four days when we could find any unclaimed dead body. The question, however, remains that a month ago, why were there so many dead bodies in the city? Why were queues witnessed outside hospitals and funeral homes? They weren't non-COVID deaths. They (the city government) didn't report all the deaths.

Sputnik: You witness a lot of emotionally challenging things every day. Have you ever come across anything that had a long-lasting impact on you?

Jitender Singh Shunty: There are so many unforgettable episodes but one instance still lingers in front of my eyes. There was a girl, who kept on driving throughout the night looking for a hospital for her father. She called me at around 11 am in the morning and asked if there was any space in the crematoriums. I said there is a lot of rush and it may take three to four hours of waiting.

When she visited me, I asked her to go in the ambulance (thinking the body would be lying in the ambulance-like everyone else's deceased relative) so that we bring the dead body. But she replied 'Uncle, the dead body is in my car'. I couldn't utter anything to her after that. She shared 'I drove throughout the night and talked to 12-14 hospitals and none of them took my father in and he passed away in the car. Now, I have been looking for funeral homes for the last five hours.' It made me think that we should be ashamed of ourselves. I will never forget her or her plight or that day.

Sputnik: Do you think in this pandemic people have also failed as a society?

Jitender Singh Shunty: I have seen the worst possible side of humans in this pandemic. The miseries and helplessness of people and those who extorted money from such people. An injection that costs $5-$6 has been sold for hundreds of dollars. People had to pay millions of rupees for hospital beds. I believe humanity died and not just humans in this pandemic. I feel ashamed about it.