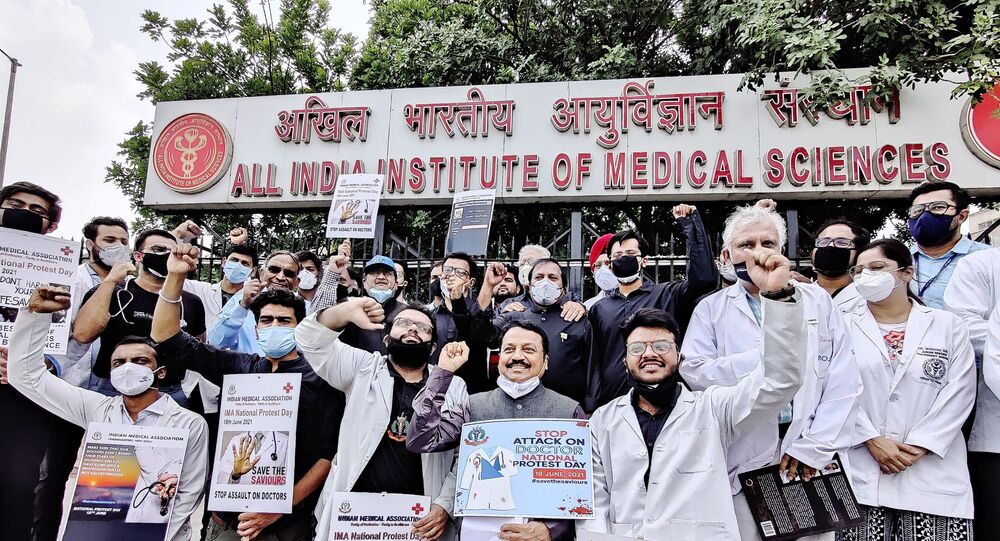 Doctors across India took part in "National Protest Day" organised by the Indian Medical Association (IMA) on Friday to call out rising violence in hospitals.

On Friday, around half a million doctors marched across India demanding protection against violent patients; they said they'll refuse to treat people in A&E unless Modi's government passes new legislation.

"If the government doesn't listen to us, then Indian Medical Association (IMA) will be forced to make a decision and the doctors will not take any emergency patients. I hope the government will listen to us," Dr. JA Jayalal, president of IMA – a voluntary grouping of physicians – told Sputnik. He added that the IMA has given the government until 1 July to act.

India's Home Ministry rejected the Health Services Personnel and Clinical Establishment (Prohibition of Violence and Damage to Property) Bill in 2019, stating that a special law cannot be created because health is a state subject. The bill, drafted by federal health ministry, seeks to punish people who assault doctors on duty and other healthcare professionals with up to 10 years in prison.

© AP Photo / Rajanish Kakade
Cases of Violence Against Doctors and Healthcare Workers on a Rise in India
"In the last one year around 400 cases of assault on doctors across India have been reported and these are grievous injuries. This 400 is just the tip of the iceberg. Many assaults, verbal threats, and minor chaos at heath centres on daily basis are a lot that goes unreported. In a country where people are so aware and active about cow violence, why doctors are left alone on street to die? There are various laws in all hospitals by the government on waste disposal, fire hazards, oxygen plants, and others but no guidelines about the number of security personal required in a government hospital," Dr. Rohan Krishnan, president of the Hospital Doctors' Association, told Sputnik.
1 / 2
© Sputnik / Sushmita Panda
Dr. Jayesh Lele, Honorary Secretary General, IMA along with other agitating doctors during the protest in Delhi on Friday

Due to the rise in assault cases, the IMA and scores of doctors, are demanding that the government enhance security in hospitals and declare them "protected zones."

"Violence on doctors should be non-bailable offence and strict action should be taken against those who attack doctors," Dr. Narendra satin, former GS of @IMAIndiaOrg said during the protest. #SaveTheSaviours @FAIMA_INDIA_ @FordaIndia @imajdnnational @HqsMsn pic.twitter.com/A8QleSXd3R

"We have to protect the medical fraternity and we will failing in our duties as a state if we don't protect them," the Bombay High Court said in May this year.

​A report by the IMA showed that nearly 80 percent of doctors in India are overly stressed in their profession, while 75 percent have experienced some form of verbal or physical violence.

"We are disappointed with the govt and upset with our society for not coming forward to protect our doctors", Dr. GS Grewal, President, DMA @FAIMA_INDIA_ @imajdnnational @HqsMsn #SaveTheSaviours @FordaIndia pic.twitter.com/9lhoitdOOb

​In the capital doctors from both the IMA and Federation of All India Medical Association (FAIMA) protested with placards outside AIIMS-Delhi. Earlier this month, a doctor at a medical facility in Assam's Hojai was brutally assaulted by relatives of a patient suffering from COVID-19 and pneumonia.