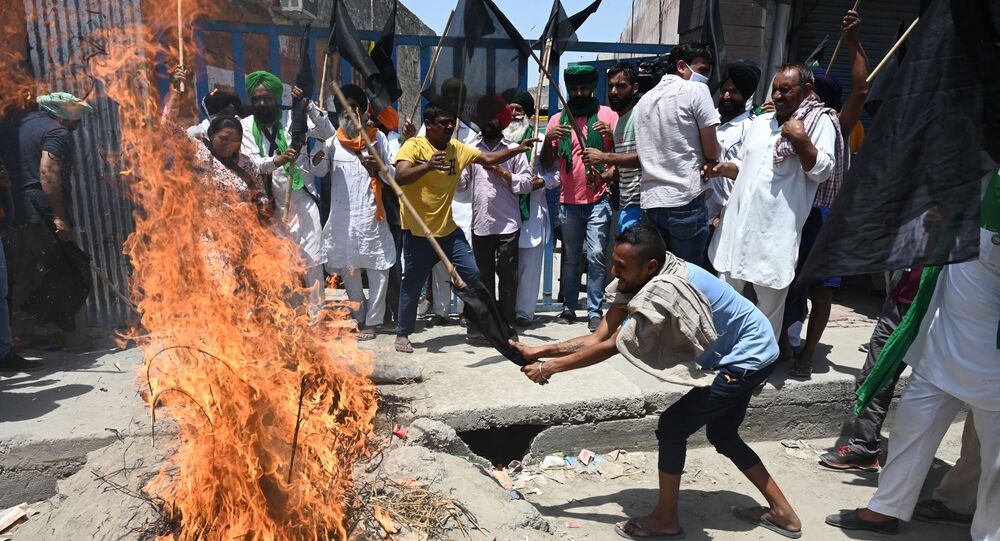 On 1 June, a group of farmers who have been protesting against new farm laws, blocked the vehicle of Devender Singh Babli, a legislator from the ruling Jannayak Janata Party (JJP), showed black flags and chanted slogans against him in the Indian state of Haryana. Babli later filed a police complaint leading to the arrest of several protesters.

A sit-in protest outside a police station by a group of farmers in the state of Haryana's Fatehabad district continues as they demand the immediate release of arrested activists.

Several activists were arrested on Tuesday after getting into a spat with Jananayak Janata Party (JJP) legislator Devender Singh Babli who had earlier filed a police complaint accusing some protesters of misconduct, harming his assistant, and breaking the windscreen of his vehicle. The protesters, in turn, accused Babil of hurling abusive words at them, and sought an apology.

After a day-long sit-in protest that kicked off on Saturday by agricultural leaders Rakesh Tikait, Gurnam Singh Chaduni, and Yogendra Yadav, Babli issued an apology and said: "I uttered some words which were not appropriate. As I am a public representative, I take back all those words and express regret".

Babli also announced his decision to withdraw his complaint against the arrested protesters. Yet, the activists still remain in police custody, leaving farmers agitated and threatening to escalate the protest.

"Devender S Babli has said he will withdraw the case he had filed [against the farmers]. He has also apologised. So why [are] the police not releasing them now? We have asked them [the police] to either release those arrested or arrest us too", Bharatiya Kisan Union (BKU) leader Rakesh Tikait told the Indian media.

Tohana MLA Devendra S Babli had used abusive & inappropriate language during spat with farmers on June 1. Later, FIR was lodged against farmers leading to several arrests.
"I forgive those involved in June 1 incident & apologise for my comments at the time," the MLA said (05.06) pic.twitter.com/tNslUF7UBT

Yogendra Yadav, the leader of the group "Samukta Kisan Morcha", who is also part of the sit-in protest, shared that the police had told them to come two days later to hold talks on the matter. Yadav said the protesters wanted those who had been arrested released, and "if they cannot release them then we should be put behind bars".

Yadav added that the sit-in protest would continue until the matter is resolved.

On Saturday, Samyukta Kisan Morcha, a coalition of farmers' unions protesting new farm laws, observed a "Sampoorna Kranti Diwas" (Total Revolution Day) in several states across India to mark one year since the passage of three contentious farm bills. Protesters also burned copies of the laws outside the offices and homes of leaders of the Bharatiya Janata Party (BJP) and its allies.

The union also urged Prime Minister Narendra Modi to resume talks over the three farm laws that sparked farmers' agitation in several parts of the country in November 2020. Amid the second wave of COVID-19 creating havoc in India, the protests came to a halt due to lockdowns.