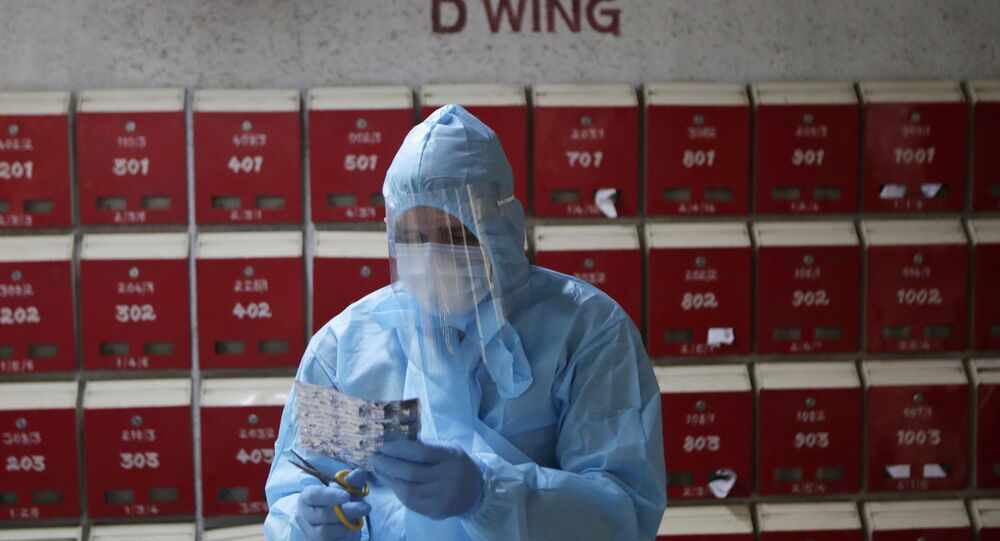 Incidences of violence against doctors and healthcare workers have drastically increased in India. Several doctors told Sputnik that they have become frightened and disheartened due to incidents of abuse and assault.

On Tuesday, a doctor at a coronavirus centre in Assam state's Hojai City was badly beaten with metal trash cans and bricks by relatives of a Covid patient who died, allegedly due to the oxygen shortage. The doctor, who was also attacked by locals, is now hospitalised but stable. Meanwhile, a video clip of the incident is circulating on social media platforms.

A growing number of medical professionals in India are facing abusive behavior or violent attacks from patients’ relatives at hospitals or healthcare centres.

Such incidents are causing fear among doctors, nurses or other medical staff.

The latest incident occurred in India’s northeastern state of Assam on Tuesday afternoon, when relatives of a patient started abusing a doctor just after he declared the patient dead at the city's Udali Model Hospital.

According to Dr. Seuj Kumar, the attendant of the patient approached him, saying the patient's condition was serious and noting that they had not passed urine since the morning.

"I went to the room and found that the patient was dead. As I broke the news to the attendant, another relative started abusing me," Dr. Senapati told the media.

A video has been brought to our notice and we've been informed that a doctor has been beaten up by brutally by patient attendants. If true @FAIMA_INDIA_ urges @himantabiswa to take immediate cognizance of this absolute mockery of law and order in the state and take strict action! pic.twitter.com/FCwKnW0LnA

​On Monday, a Dr. Deepak, 50, was assaulted in Chikkamagaluru's Tarikere town in the Karnataka state over the death of a six-year-old patient suffering from dengue fever. Four people were arrested and charged with attempted murder following the assault.

According to the Indian Medical Association (IMA), incidents of violence have increased over the years.

Condemning both incidents, Dr. J.A. Jayalal, the president of the association, said: "I understand public anger, they come to us so that we can help them but when their loved ones die of course they will be angry. It is natural for people to have that feeling of anger when they are coming with hope.”

“But it is the responsibility of the government to ensure the protection of the doctors and other medical staff,” he said while talking to Sputnik on Wednesday.

“This can be done in two ways - declaring all the hospitals as a protected zone and implementing strict laws in the hospitals and covid centers. Also, miscreants should be punished stringently so that it can set an example for others," he added.

According to Jayalal, immediate action needs to be taken against the culprits and security around hospitals must be increased.

“There's no point if they come after the incident. Doctors and other healthcare staff are working tirelessly to save the lives of the people. Such incidents scare them and demotivate them. This needs to stop otherwise the situation will get worse," he added.

Several doctors told Sputnik that despite working tirelessly throughout the pandemic, they have been treated in an unacceptable way.

On Wednesday, the IMA stated that as many as 594 doctors had died during the highly-infectious second wave of the coronavirus pandemic in the country.

With repetitive incidents of violence against doctors, the IMA has appealed to federal Home Minister Amit Shah to urgently implement an effective and strong law "against healthcare violence" to safeguard the healthcare professionals of the country.

Amid rising assault cases, the IMA has said that it has been constantly requesting the Indian government to enact a central law with Indian Penal Code (IPC) section, fixing the responsible officers to investigate, time frame for investigation, and punishments for culprits, as early as possible, without option for bail.

According to the findings of a study by IMA, more than 75 percent of doctors in the country have faced at least some form of violence and over 68 percent of incidents have been committed by the attendees or relatives of patients.

Mental health experts also point out that these incidents raise the mental trauma of the doctors who are already exhausted by the ongoing pandemic.

According to Dr. Zirak Marker, a senior psychiatrist, and MPOWER advisor, the risk of experiencing trauma and stress is very high for frontline medical workers. Long working hours, fatigue, lack of rest and sleep, dealing with complications, uncertainty, difficulty with relatives, and unrealistic expectations all contribute to burnout and emotional drain.

He said it has to be realised that frontline workers in the first place are human beings with feelings, just like any other person.

“They are not super-humans or gods that can be in control of every given situation or predict how things may turn out. They tirelessly work despite sometimes having difficulties or problems, at home or work. They come to work despite sometimes not feeling up to it or if they are feeling sleep deprived or fatigued," Marker told Sputnik.

The Indian Medical Association (IMA) once stated that a bill titled “Prohibition of Violence and Damage to Property Bill, 2019” was drafted by the Health Ministry in 2019. But the Home Ministry dismissed the need for a separate law to check violence against a specific profession.

“At this pandemic, we also demand hospitals shall be declared as protected zone and mandatory official observance by police are implemented in all hospital premises,” the IMA statement added.

Some doctors said they get scared and disheartened due to these incidents of abuse and assaults, and added that violence has increased during the pandemic.

Last month, the Bombay High Court directed the states to protect doctors and healthcare staff in the front line battling the Covid-19 pandemic.

As cases of violence against doctors and medical staff has increased dramatically in the ongoing second wave of the coronavirus, several doctors have warned of withdrawing their services if attacks continue.