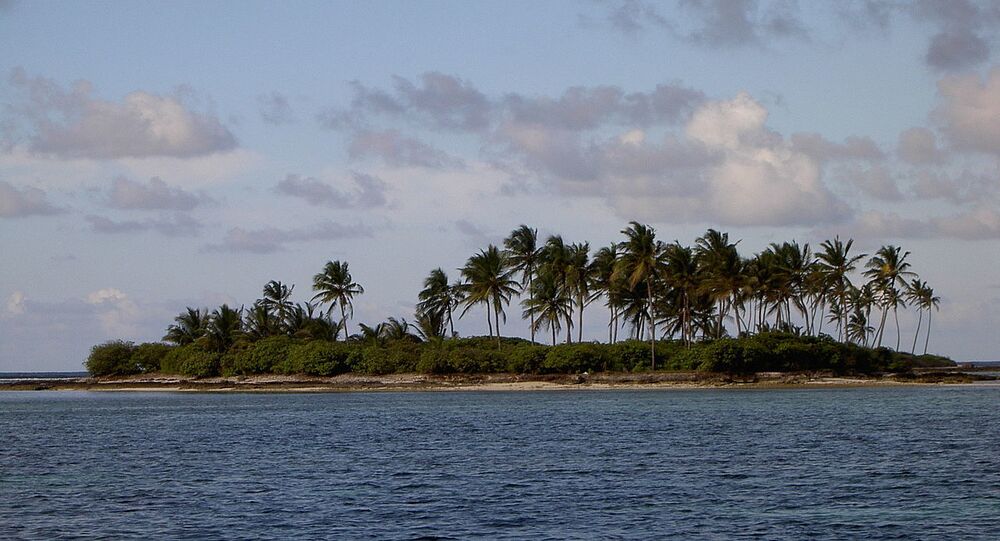 Hundreds of inhabitants of India's Lakshadweep Island have been protesting against a controversial new reform law which includes rules for the easing of Covid restrictions, the introduction of the Gunda (Goon) Act, a beef ban and other elements. It was introduced by Bharatiya Janata Party politician Praful Khoda Patel.

With #SaveLakshadweep and #RevokeLDAR, netizens have created an uproar on social media, protesting against a new reform law, ‘Lakshadweep Development Authority Regulation, 2021 (LDAR 2021)’.

The protest sparked off on Sunday after a video of a person claiming to be a native of Lakshadweep island went viral. He can be seen accusing the administration of destroying property and taking away the jobs and livelihood of the locals under the pretext of making a smart city. ​

This is what Lakshadweep people get for being peaceful for generations.
This is not the only case, many more undemocratic regulations are going to hit our people. #Saveus#SaveLakshadweep #RevokeLDAR @BrutIndia @TheQuint @AltNews @guardian @AJEnglish @ndtv @aajtak @RanaAyyub pic.twitter.com/6Ytb4IJaXZ

The inhabitants of the island have accused Lakshadweep's administrator, Bharatiya Janata Party (BJP) politician Praful Khoda Patel, of easing COVID restrictions, which they claim led to a spike in coronavirus cases. The island, which was COVID-free throughout last year, reported its first case in January 2021, after which it spread like wildfire. Currently, it has a total of 6,611 cases (2050 active cases) and 24 deaths.

Moreover, the inhabitants have also opposed the implementation of the Goonda (goons) Act, calling it undemocratic on an island that has a very low crime rate.

To amplify the protest worldwide, popular Indian actor Prithviraj Sukumaran, who has shot many films in Lakshadweep, has come out in support of the inhabitants of Lakshadweep.

He tweeted a long note and said, “None of the islanders I know, or none of those who’ve spoken to me are happy with what’s happening. I strongly believe that any law, reform, or amendment should never be for the land, but for the people of the land.”

Questioning the authorities and their new reform law, Prithviraj said, “It’s never the geographical or political boundary that makes a country, state, or union territory but the people who live there. How does disrupting the way of life of a centuries-old peaceful settlement become an acceptable means of progress? How will threatening the balance of a very delicate island ecosystem with no regard for the potential consequences pave the way for sustainable development?”

Several politicians have also joined the protest including Kerala state minister Elamaram Kareem, who has written to the President of India Ram Nath Kovind, called the new reform law an "anti-people" order, and urging him to roll back his appointment as an administrator of Lakshadweep.

Talking about the ban on beef in Lakshadweep, Kareem wrote in the letter: "The undemocratic and anti-people regulation in the name of 'Animal Prevention' which intends to ban the slaughter, transportation, selling or buying of beef products is one among such orders. This is a blatant onslaught on the people who depend on dairy and the growing of bovine as a means of livelihood. Neither the island community nor the local bodies on the island ever raised such a demand and they were never consulted while such regulations were being framed."

Rajya Sabha MP from Kerala, Elamaram Kareem, has written to the Indian President requesting him to urgently call back the administrator of the union territory of Lakshadweep, Praful Patel, as his anti-people policies have led to widespread protest among the people of Lakshadweep. pic.twitter.com/G5GypBKKRg

Angry netizens have taken to social media protesting against the implementation of the new reform law and the impact it is causing to the locals.

The beautiful islands of Lakshadweep are under threat. Lakshadweep Administration is systematically destroying the livelihood and displacing scheduled native community with wicked policies and laws in the name of development. #SaveLakshadweep #RevokeLDAR #RevokeLDAR2021 pic.twitter.com/GFUiWIrJsZ

Lakshadweep was a region without any crimes or drugs.Peace was in the air till the invasion of BJP.Currently there is unnecessary Gunda Act,drugs in the name of tourism and above all nervousness among the lives there. Save the island from the illegal invaders.#SaveLakshadweep pic.twitter.com/RAkk6dHBUi

The administrator should resign and recall all these...
The administrative injustices have served the citizens a taste of bad fortune...😑
Stay together and protest against the fascist rule of Central Government#SaveLakshadweep #StandWithLakshadweep pic.twitter.com/1MHO8sNbl8