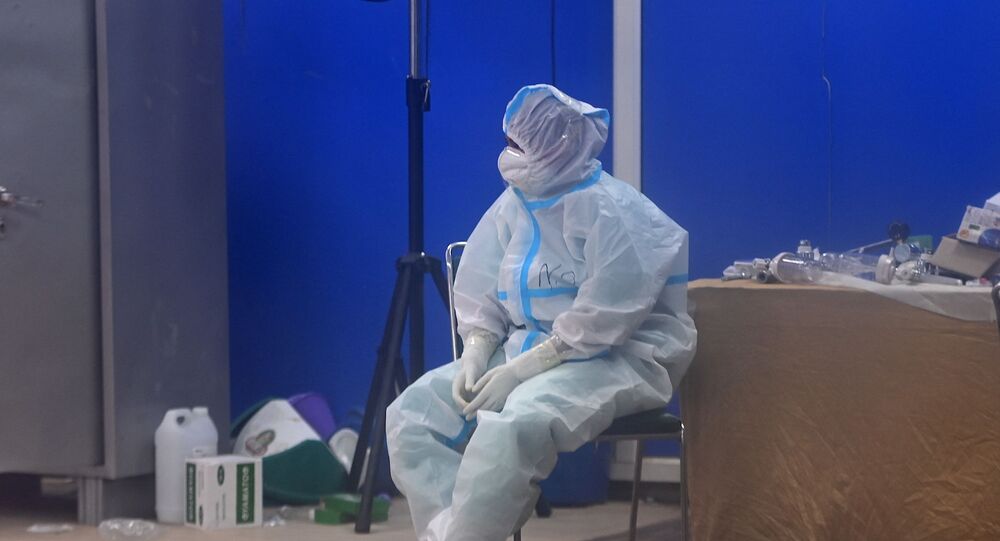 The second wave of coronavirus has hit India hard, with the country clocking up more than 300,000 new infections each day for the past fortnight as hospitals struggle because of a shortage of beds and oxygen. On Friday, India reported 414,188 new cases of coronavirus and 3,915 deaths throughout the country.

Tales of unsung valour are popping up everywhere in India as doctors, nurses and police officers pull out all the stops to face the crisis unleashed by COVID-19 as the second and much deadlier wave sweeps through the nation.

The rising number of cases has put immense pressure on healthcare facilities in the cities as healthcare workers struggle to manage the stupendous increase in workload while under constant threat of contracting the virus and passing it on to their relations.

There is little time to grieve over one's own losses as doctors rush to save as many lives as they can. A 45-year-old doctor working in a private hospital in Pune city, Dr Mukund Penurkar, resumed work a day after his father died of COVID-19. He held the last rites for his father alone and was back at his patients' bedsides the next evening.

"My 85-year-old father died of COVID-19 on 26 April. He had co-morbidities, suffered blockage of arteries in his lungs and had renal failure. He wanted me to continue working for those hit by the pandemic and save as many as possible. I joined work immediately after his death as this is the best tribute I can pay to him," Dr Penurkar, whose mother and brother have also been hospitalised with COVID-19, told Sputnik.

In Karnal city, as many as 49 nurses out of 198 at the Kalpana Chawla Government Medical College were infected with the virus in March and April but as soon as they tested negative, almost 30 of them went straight back to work.

"I tested positive for COVID-19 on 15 April and remained in hospital. I went through the same ordeal as most COVID-19 patients do. When I tested negative on 1 May, I was back in the COVID-19 ward the next day. Now I know what trauma the patients go through and I am trying to remove their fears and soothe them mentally as well," nurse Navneet Kaur told Sputnik.

Rakesh Kumar, a 56-year-old assistant sub-inspector of police in Delhi has been performing the last rites for people who have no one to cremate them at Delhi's Lodhi Crematorium. Since 13 April, Kumar has performed the last rites for more than 50 corpses himself and assisted in the cremation of about another 1,000.

Working with a passion to give solace to those who are bereaved because of COVID-19 and not wanting to abandon his post, the police officer went to the extent of postponing his daughter's marriage which had been scheduled to take place this week. His act of selflessness has attracted praise from Delhi Police Commissioner, SN Shrivastava, whose adulatory post went viral with 343,000 views.

COVID time has thrown up some real heroes. ASI Rakesh deserves highest degree of praise and encouragement. In fact it is men like him who keep the society going. Something that many need to learn @LtGovDelhi @HMOIndia @PMOIndia https://t.co/rx8RYIL6Zd

​And cops in Guguram city in Haryana state, near Delhi, have been walking an extra mile after a taxing day to feed hundreds of people every day who are waiting in long queues to refill their oxygen cylinders.

The officer in charge, Yashwant Singh, said that his team was engaged in an extra task of cooking food for nearly 400 people every day on the office premises. The food is distributed to those queuing at a nearby oxygen cylinder centre where the wait can be as long as 10 hours.

"We have roped in several companies and are distributing food and snacks to people in queues. We are all in this together and we are doing whatever we can to help," Yashwant Singh said.