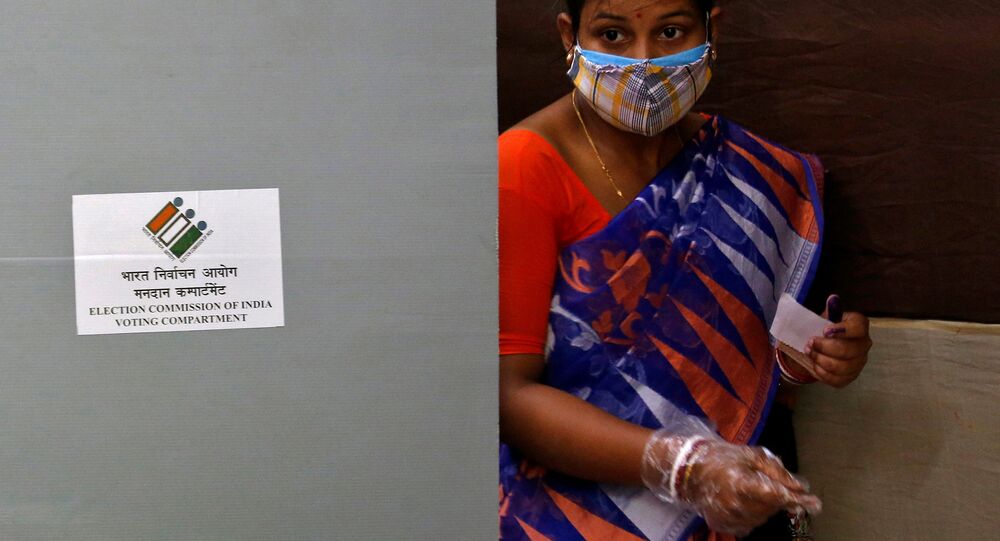 Following COVID-19 protocols, the Election Commission of India (ECI) began counting the votes of West Bengal and three other states – Assam, Kerala, and Tamil Nadu – as well as the union territory of Puducherry from 8 am on Sunday.

The poll body has banned all kinds of victory processions across these states in the wake of rising COVID-19 cases in the country and has ordered to file a police complaint if any party is found violating the norms.

Mamata Banerjee's Trinamool Congress (TMC) appears to be heading towards a third term, projected to win over 210 seats out of 294 in India's coastal state of West Bengal.

Soon after the news broke that Banerjee lost her Nandigram seat, the West Bengal chief on Sunday evening said that she would move to the Supreme Court against the ECI for alleged malpractices - she believes that the poll body changed the results in the city.

Mamata Banerjee, a staunch critic of the Narendra Modi-led government, has urged the country's foremost opposition leaders to join forces against the BJP.

The BJP, which won three seats in the 2016 assembly elections, is now projected to take 80 seats, emerging as the main opposition.

Accepting his party’s defeat, Prime Minister Narendra Modi sent a congratulatory message over Twitter to Banerjee and promised to extend all possible support to her.

Congratulations to Mamata Didi for @AITCofficial's win in West Bengal. The Centre will continue to extend all possible support to the West Bengal Government to fulfil people’s aspirations and also to overcome the COVID-19 pandemic. @MamataOfficial

According to ECI data, the M.K. Stalin-led Dravida Munnetra Kazhagam (DMK) party and its allies quickly crossed the majority threshold.

Modi tweeted and sent his well-wishes to M.K. Stalin. He said, "We shall work together for enhancing national progress, fulfilling regional aspirations and defeating the COVID-19 pandemic".

Congratulations to Thiru @mkstalin and @arivalayam for the victory in the Tamil Nadu assembly elections. We shall work together for enhancing national progress, fulfilling regional aspirations and defeating the COVID-19 pandemic.

On the other hand, the current governing party, Anna Dravida Munnetra Kazhagam (AIADMK), is expected to win 72 seats, with three of these already confirmed victories, while its state-level ally the BJP is ahead in just three constituencies. Another local ally, Pattali Makkal Katchi, is projected to win six seats.

The Makkal Needhi Maiam party is expected to take one seat.

In the state, no party has been elected for two continuous terms since 1977. The LDF and United Democratic Front (UDF) have alternated in power every five years.

According to the election commission's website, out of 140 seats in the state, the LDF is projected to capture 97, while the UDF is expected to take 42, and one seat is projected to be won by an independent candidate.

I would like to congratulate Shri @vijayanpinarayi and the LDF for winning the Kerala Assembly elections. We will continue working together on a wide range of subjects and to ensure India mitigates the COVID-19 global pandemic.

The BJP-led National Democratic Alliance (NDA), or "Mitrajot" (Alliance of Friends), is set to form the government in Assam for a second consecutive term, as the governing coalition is likely to win 77 seats in the 126-member assembly. The Congress-led "Mahajot" (Grand Alliance) is expected to win 48 seats, and one other seat is presumed will go to an independent candidate.

The ECI is yet to declare the final result for any of the 126 seats, as the vote counting is still in progress in 34 districts across the north-eastern state.

Former union territory chief N. Rangaswamy's All India N.R. Congress (AINRC) is ahead, expected to take 14 out of 30 seats.

The BJP gave up the majority to a local party - in this case, the AINRC, which contested 16 seats (winning 14), while the BJP contested nine seats. The BJP is leading for five seats.

Puducherry is currently under the President's Rule after the collapse of the V. Narayanasamy-led Congress government. The Congress-led alliance is expected to win five seats.

Six other seats, meanwhile, are predicted to go to independent candidates.