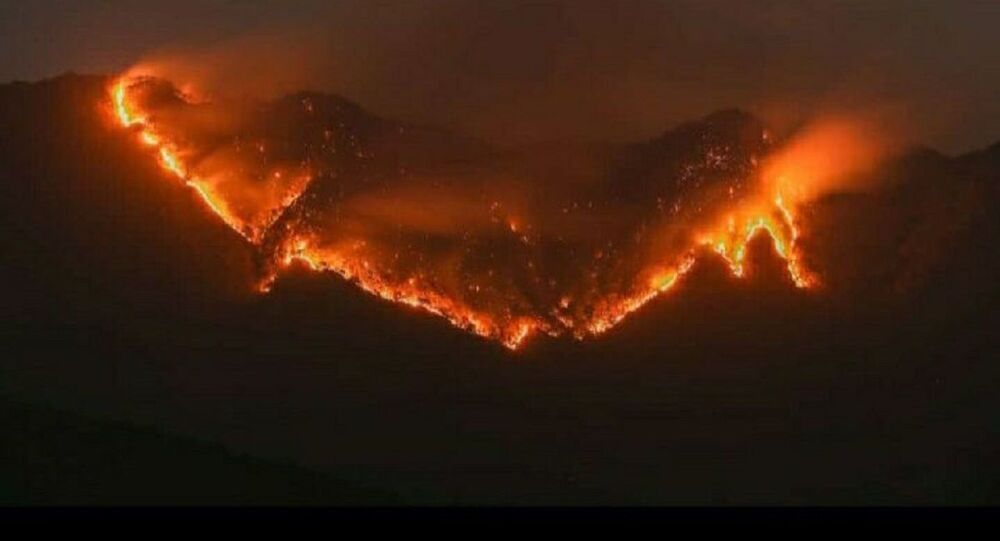 Mizoram is a picturesque state located in the northeastern part of India, guarded by the mighty Himalayas. The state is blessed with the bounty of nature, with a diverse variety of landscapes, as well as flora and fauna. The state covers an area of over 21,000 square kilometres, 91 percent of which is forested.

The Indian state of Mizoram has been witnessing a massive forest fire since early Sunday, with flames approaching now residential areas.

© AFP 2021 / PRAKASH SINGH
What's Setting Ablaze the Forests in Himalayan State of India as Uttarakhand Witnesses 45 Fires
As per locals updating about the situation on Twitter, the fire is on the verge of reaching the 2nd biggest settlement area, Lunglei. The Indian Air Force has deployed two helicopters to spray water and douse the fire, the Indian media reported on Monday.

Visuals from the regions look horrific as residents of the affected part of Mizoram are watching the flames erupting on the horizon.

No causalities have been reported so far. As for animals and trees, the numbers of deaths and damage remain unclear at present.

Along with firefighters and the Indian Air Force, security forces of the Assam Rifle Batallion, Border Security Force (BSF), and local volunteer groups are trying to put the fire out.