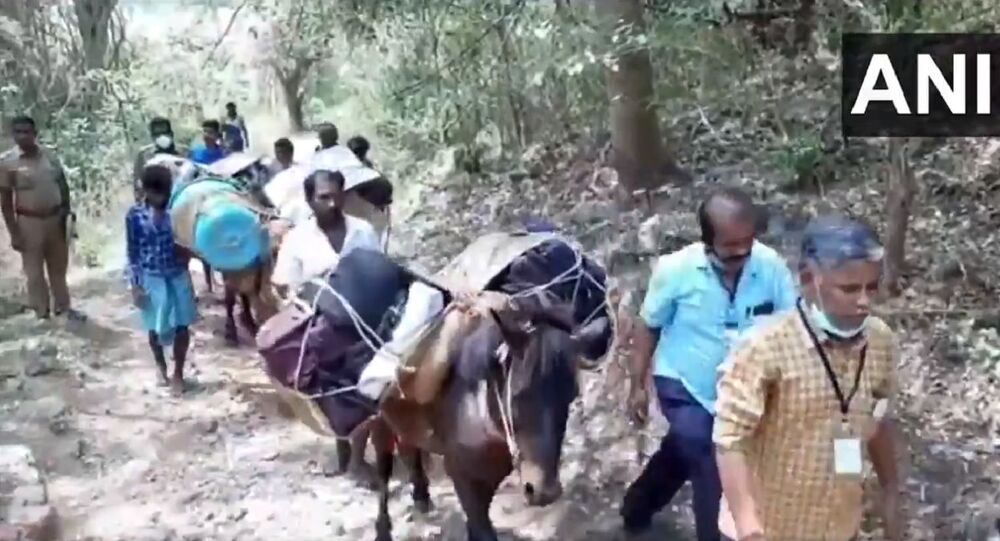 Voting for the assembly elections is currently underway in four Indian states - Assam, Kerala, Tamil Nadu and West Bengal - as well as the Union Territory of Puducherry. A large number of voters have been turning up to the polling booths to cast their vote despite strict Covid-19 regulations. The counting of votes will be held on 2 May.

Netizens have been taking a satirical dig at the Election Commission of India (ECI) and Indian Government after a video of donkeys carrying Electronic Voting Machines (EVMs) to remote polling booth went viral.

The video clip that has been doing the rounds on the Internet is from the Natham area in Tamil Nadu state's Dindigul district. Since various hilly areas lack properly laid-out roads, vehicular traffic is a herculean task.

To make voting possible for the people living in those villagers, the polling officials have been making use of donkeys to trek up to 10-12 kilometres and transport electronic voting machines and other necessities to the polling both amid tight security.

Looking at this, while one section of the Internet is praising the efforts of polling officials who are doing an arduous job to ensure everyone gets to exercise their right to vote, some netizens are questioning the government for the lack of progress and development in the country, where there are still no roads to connect some communities with the outside world.

This video makes me sad 😔It shows that even after 70 years of Independence....roads haven’t reached to every nook and corner of the country https://t.co/hN0asSInh8

I couldn’t stop laughing.. seriously ECI? Did u recruit them to do this job?🙄

And we are planning to send humans to space.🤦