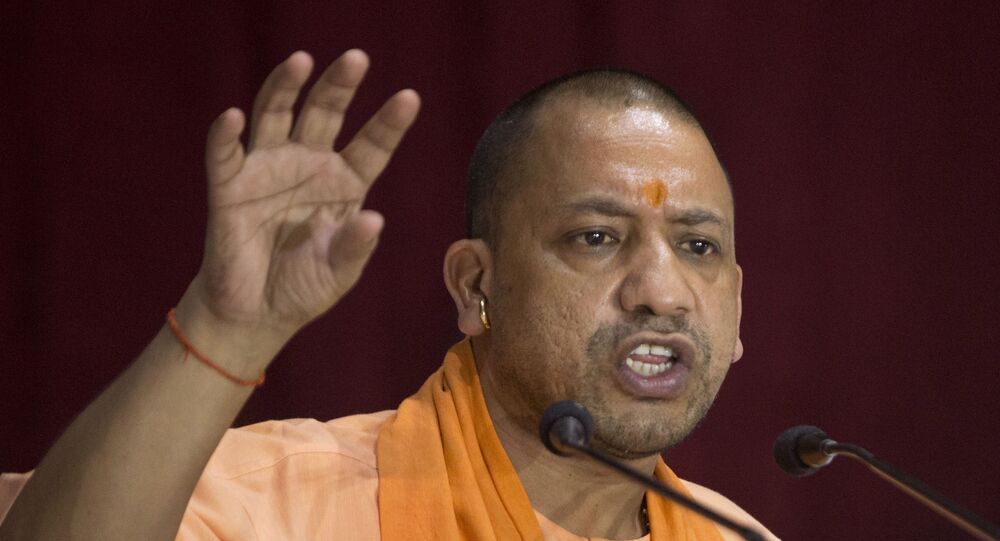 India is presently struggling with what is being called the "second wave" of coronavirus. In its highest single day rise, India reported 103,558 cases in the last 24 hours, taking the total tally of active cases to 741,830. Meanwhile, the third phase of vaccination has also started in India for everybody aged above 45.

The state chief of Uttar Pradesh (UP), Yogi Adityanath, on Monday provided a video snippet to the Indian media in which he spoke about the ongoing efforts to encourage more people to get vaccinated against the novel coronavirus.

While the official video clip of the Hindu monk tweeted by Indian news agency ANI is full of heartening motivation for people to get inoculated, a snippet of Adityanath using an obscene Hindi word – probably unsure of whether the camera was on or off – has gone viral on social media.

© Photo : YouTube/Narendra Modi
India: Narendra Modi Hails 'World’s Biggest Vaccination Drive', Urges Everyone To Take Vaccine
The snippet posted by several social media users shows Hindu monk and head of the country's largest state Adityanath standing before an ANI microphone, recording his video bite when something happening behind the camera distracted him and irritated, he used Hindi slang was recorded.

In the video, whose authenticity is yet to be verified, Adityanath can be heard saying the word "Ch**iya" that in Hindi means "idiot" or "f***er", ostensibly to somebody behind the camera.

Captioning the eight-second video, which has been viewed over 7,000 times on Twitter since it was posted an hour ago, journalist Anurag Dwary wrote, "It is shameful".

​Netizens coming across the video have reacted to it with astonishment, saying it was not right for the serving chief minister of a state to use foul language.

A serving Chief Minister @myogiadityanath using this language for anyone let alone for a scribe at work is absolutely unacceptable and offensive. https://t.co/bhQ0T73RYS

And he's abusing the camera person?!! So bad

Absolutely Disgraceful for a CM to use such expletives. https://t.co/tdjsTlAcu5

​​On the other hand, some supporters of the ruling Bharatiya Janata Party (BJP), who jumped to Adityanath's rescue, argued that the video is fake and have tagged UP Police to investigate the authenticity of the snippet.

This is a edited video...
Hope up police will take action against these people soon..

Meanwhile, ANI has posted the official video of Adityanath's cli[ with an editor's note at the end saying: "The earlier issued 'Live Sound' byte [sic] is retracted" – paving the way for more confusion around whether the UP state chief actually used the obscenity.

Video byte of UP CM Yogi Adityanath on Covid vaccination

​So far, Adityanath's office has not released an official statement addressing the subject and hence it remains unclear if the video is real or doctored.