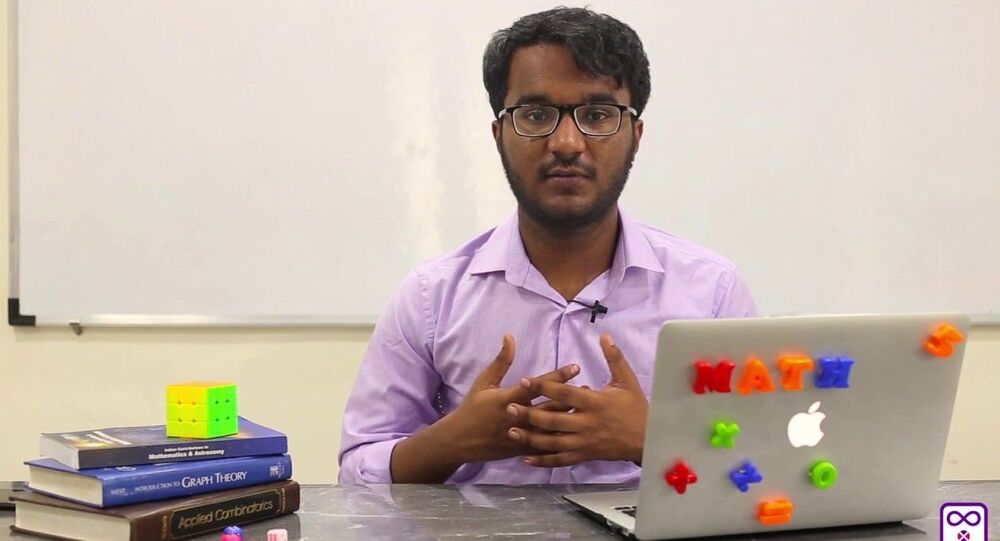 The 21-year-old Mathematics champion, Neelakantha Bhanu Prakash, holds four world records and 50 Limca records for being the 'fastest human calculator' in the world. He won the first-ever gold for India in the Mental Calculation World Championship at Mind Sports Olympiad 2020, held in London.

The ‘World’s Fastest Human Calculator', Neelakantha Bhanu Prakash, believes Maths as an individual subject is not just about calculations, it is an art form which we do not look into – it is all about patterns that make sense. Interested in promoting mental maths as a sport, he shares with Sputnik how it is important for all of us to communicate with the world.

Sputnik: In your view, what is the magic of maths and why do you believe it is more than just problem solving?

Neelakantha Bhanu Prakash: Maths is not just a subject that helps us solve problems. It’s a way of life that helps us communicate with the world. It helps us understand the world, just like a language helps us to do so. Maths is a language, it’s a learning experience and it’s a way to make sense of things which otherwise look random.

Sputnik: How did your tryst with maths begin? How many hours do you dedicate to practising the subject daily?

Neelakantha Bhanu Prakash: In 2005, an accident rendered me bedridden for a year. My parents encouraged me to solve puzzles in an attempt to boost my brain, and ten years later I went on to break a World Record held by Scott Flansburg to become the world’s fastest human calculator.

This was the beginning of my journey to learn maths not as a subject, but as a sport. I used to practice math puzzles, calculations for long hours, but I don’t do it as often anymore.

Sputnik: How can maths help in controlling one's emotions?

Neelakantha Bhanu Prakash: Maths is the root to logic. So, to control one’s emotions entirely is to be able to process, multi-task and at the same time. Mental maths helps one to develop cognitive abilities. My works focus around parallel thinking, partitioning thoughts and how it can help people from different walks of life.

Sputnik: Do you believe that mathematicians are performers and artists too? If yes, how?

Neelakantha Bhanu Prakash: Speed mathematics and mental mathematicians across the globe are performers. I compare mental mathematicians to chess players. They are artistic, in putting forth how maths can be perceived. The world can think of speed calculations as a way to celebrate one’s brain power. I can race past the speed of calculators. Therefore, I am an artist. I would like to create more mental calculators globally.

Sputnik: What do you do in your leisure hours?

Neelakantha Bhanu Prakash: In my leisure time, I read and learn constantly. I head a start-up called Exploring Infinities, which aims to eradicate math-phobia across the globe through experiential maths learning courses. I work with government schools in India through a foundation called Vision Maths Foundation. I travel a lot. I play games. I want to promote maths as a sport. I do public speeches and enjoy movies too.

Sputnik: Would you want to do something for all those kids who are afraid of maths and eventually quit it the moment they get a choice?

Neelakantha Bhanu Prakash: Maths cannot be avoidable. The idea of how maths is being taught in schools is not right. Maths is the way you communicate with the world. It is important for everyone to know this subject. Students can quit maths, but should not be scared of it. They should learn enough and then quit. However, eradicating maths-phobia is important. 75% of the world is maths-phobic and to change that is a huge initiative.

Sputnik: Would you like to be called a mathematician, the next maths wizard, like Shakuntala Devi, or someone who made maths easy? How did you feel when you raced against 100 calculators at the same time and won against all of them? How did you celebrate that moment?

Neelakantha Bhanu Prakash: I hold world records and I am called a mathematician. People say that I’m the next Shakuntala Devi, but I would want to identify myself with someone, who made this subject easy for people across the globe. So, my mission is with Vision Maths.

My idea is to make maths easy and make it a popular culture, the same way poets made language popular.

When I raced past the calculators at the same time and won it all of them, it was a fantastic feeling. It was a celebration of human intellect over the computers. Maths learning is the key to unlocking the potential of the brain.

Sputnik: I heard you say in one of your speeches, "we all are capable of achieving the impossible, it is just that we have to believe in it." Can you describe this mantra of yours?

Neelakantha Bhanu Prakash: We are capable of achieving the impossible. Before I made the world record, people told me that calculating a 12-number per second is the limitation of a human brain, but if you believe then you can hit it. For this, cognition is the most important thing. To achieve the impossible, you have to have the right state of mind.

Sputnik: Do you think majority of girls and women are more scared of maths as compared to boys or men?

Neelakantha Bhanu Prakash: Everyone is capable of doing maths. There is no gender bias, no disparity on the basis of creed, race, location, it is only about how a kid is given the experience and how he/she is approaching the subject.

Sputnik: What are you plans for the future?

Neelakantha Bhanu Prakash: I want to scale up my maths start up globally. I want to continue working with governments and change maths education, and would want to change the way billions of people look at it.