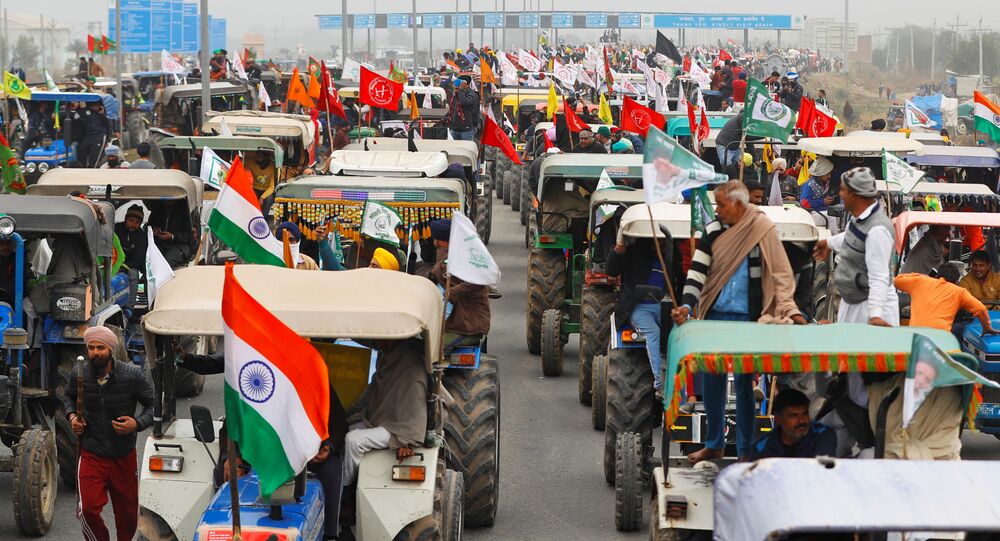 Thousands of farmers have been protesting at Delhi's Singhu, Tikri, and Ghaziabad borders from past 59 days, condemning three contentious farm laws passed by the Narendra Modi government last September.

Farmers protesting on Delhi’s border with the neighbouring Indian state of Singhu on Friday evening claim to have apprehended a would-be instigator, who was allegedly trained and instructed to incite violence and disrupt a tractor rally scheduled for 26 January.

The young, unnamed man was wearing a black jacket and a face mask when he was seen on the farmers’ social media.

When questioned, the young man stated that ten men and two women were involved in planning a provocation which would include several attempted shootings, adding that he didn’t know their names or whereabouts.

"On January 24, the plan is to shoot the four people on stage. Pradeep Singh trained us...he is police SHO (station house officer) of Rai police station," he claimed.

Soon after his claim, the SHO of the Rai police station, Vivek Malik, denied all the allegations and told NDTV television news, "No policeman named Pradeep Singh is posted in the station."

"Our plan was that on January 26... a gun will be fired when the Delhi police try to stop [the farmer's tractor rally]," the captured man claimed.

News agency ANI also quoted the man as saying, "We were working for money. There are other people as well who are involved in this who are yet to be caught. I would request that our families should not be informed about this. We were to be given 10,000 rupees each to carry out the disruption."

The man has been handed over to the Haryana police, where he is being questioned.

A man, who was presented by protesting farmer leaders before reporters at Singhu border on Friday night as they alleged a conspiracy to kill 4 of them & create disturbance during their proposed tractor parade on January 26, is being quizzed by Haryana police in Sonipat: Officials

​The farmers' unions are slated to hold a 'peaceful' tractor march in Punjab, Haryana, on the Delhi border and in different parts of the country on Republic Day, January 26.

Earlier this week, the Narendra Modi government proposed a 18 month break before the implementation of three new farm laws and setting up a joint committee to find an amicable solution to end the deadlock.

But farmers rejected the government proposal.

Farmers have been protesting against the farm reforms brought about by the Modi government: the Farmers Produce Trade and Commerce, the Farmers Agreement on Price Assurance and Farm Services, and Amendment to the Essential Commodities Act 2020.