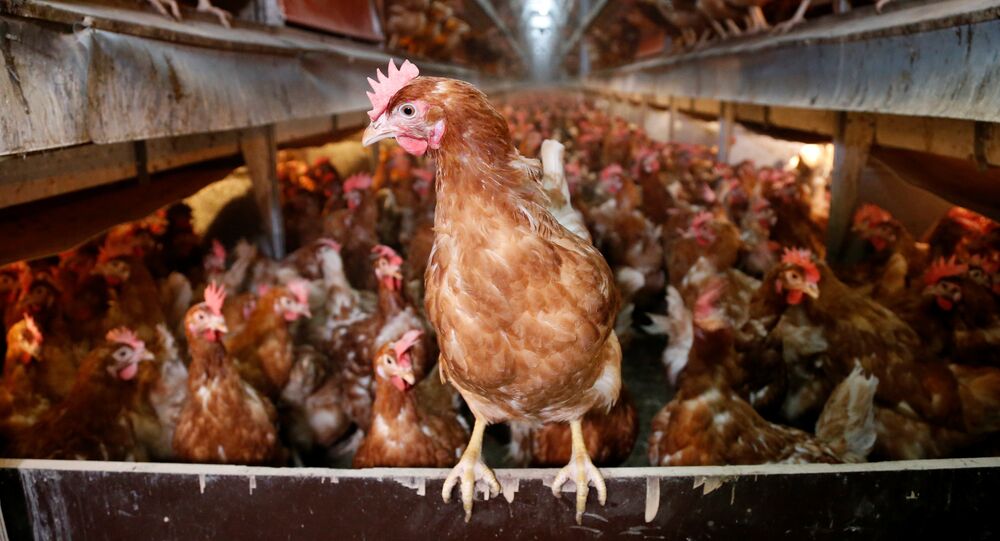 Bird flu cases have been reported in 10 Indian states, namely Kerala, Rajasthan, Madhya Pradesh, Haryana, Gujarat, Delhi, Himachal Pradesh, Uttar Pradesh, Uttarakhand and Maharashtra. The states have banned the sale of processed and packaged chicken as a precautionary measure to curb the disease.

As north Indian states have banned the sale of chicken, eggs and birds, the sudden closure of the market has put them at heavy losses for at least six months, people involved in the poultry farm business claim.

"There has been no business for the past ten days. Our everyday sale is around half-a-million-dollar. The closure of the marketplace affects thousands of families connected with us", Mohammad Salim, general secretary of Ghazipur Murga Mandi (Chicken wholesale market), tells Sputnik.

The Ghazipur chicken market is Asia's largest poultry market and supplies chicken, eggs, and meat to Delhi and nearby regions.

© CC0
Bird Flu Scare Afflicts India as Chicken, Crow Carcasses Flood Streets of Maharashtra
On 11 January, the Delhi government banned the sale of processed and packaged chicken brought from outside the city as a precautionary measure to curb the spread of bird flu.

"Delhi does not have its poultry farm, and the government has banned the supply from outside. From where are hotels and restaurants getting chicken? Illegal business hurts us", Salim laments, while suggesting that chicken might be sold illegally in the city after the ban.

The annual turnover of the poultry industry in India is around $8 billion.

Poultry is a major source of meat in India. Its share in total meat consumption has doubled to 28 percent from only 14 percent ten years ago.

Delhi’s neighbouring state of Haryana has reported the highest number of bird deaths - 400,000 in the past three weeks, followed by the southern state of Kerala.

One of Haryana's poultry farm owners, Arvind Kumar, director of Safal Feed Private Limited, says, "This is the third time in 12 months that our business has been affected. First, bird flu news in March last year, then the coronavirus pandemic hit us and now again bird flu. Our balance sheet is at a loss. How many times do I have to ask my employees to go on unpaid leaves?"

Arvind Kumar feels that the bird flu has nothing to do with broilers because "farms are closed, and hens are not contacted with outside birds, hence there is no risk".

© Sputnik
BJP Lawmaker Claims Protesting Farmers are Conspiring to Spread Bird Flu by Consuming Chicken
Arvind referred to the ban as "unnecessary and too much" as he said that not a single human death has ever been reported due to eating chicken in India.

Last week, the Haryana government announced giving about $1.25 for each bird culled to poultry farm owners.

"A hen has a lifecycle of 45 days or a maximum of 60 days. We haven't been doing business for the past ten days. What options are we left with? We don't have money to feed the broilers either", Arvind says, as he explains that his business is not eligible for the relief announced by the Haryana government.

He also adds that the Indian media carry the news about bird flu in a harsh and hostile manner.