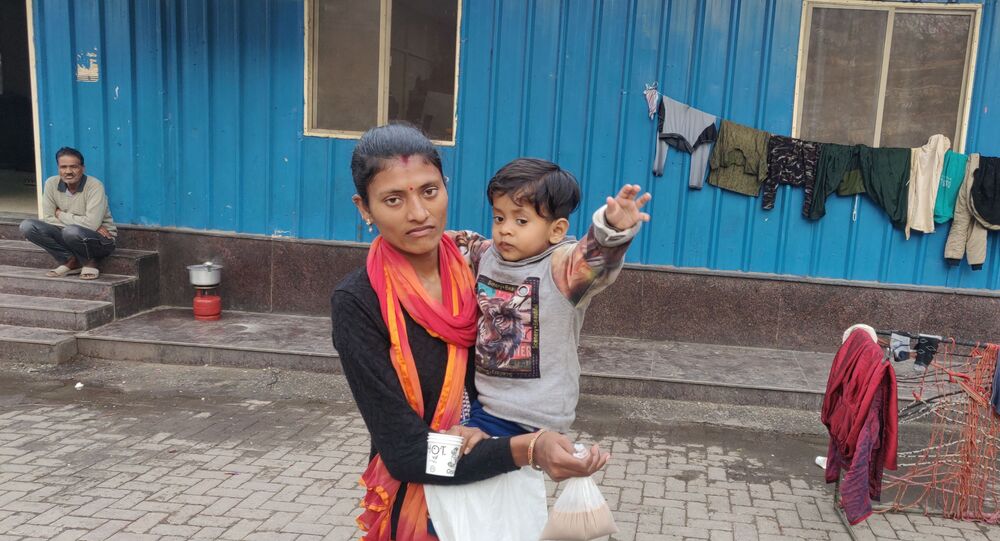 The number of homeless people in Delhi stands at 150,000-200,000, of which at least 10,000 are women, according to the non-profit advocacy group Housing and Land Rights Network.

There are many homeless people in India's cities – living on the streets is tough, especially for women. In the country's capital Delhi, shelter homes are often the only place the homeless can find refuge.

Before a nationwide lockdown was enforced in India, Meenakshi and her family used to either beg or scrape by as rag pickers in the neighbouring state of Haryana. Life became even more difficult when the authorities banned them from sleeping on the street, saying it was against lockdown rules.

© Sputnik / Deexa Khanduri
Meenakshi posing with one of her child

In August, the family arrived in Delhi. They had heard that free food and accommodation in government shelter homes was being offered to the destitute. These homes are for migrants, labourers, and homeless people and there are 250 such shelters in Delhi, accommodating around 8,000 people.

Meenakshi, who believes "I must be around 32", says she has seven children — five boys and two daughters. The youngest of them is three months old.

They previously lived in the Palwal area of Haryana. Meenakshi says this about her rag picker husband: "He was earning around 8,000 rupees ($100 approx.) a month. But during the lockdown all factories were closed. There were no buyers left for the rags".

She said they were living in a graveyard in Palwal for four months when someone told her husband about the shelter homes, so they upped sticks and journeyed 100 km to the capital in the scorching August heat.

Today, the couple has a new place to live in — Sarai Kale Khan, a Delhi government-run shelter home. It's also the city's largest, accommodating around 550 people. It has six "Baseras" (buildings) — four for families, one for men, and one for recovered hospital patients, including drug addicts.

According to the caretaker, Ricky, 70-75 percent of people living in the shelter home are permanent residents. Many have lived there for the past six years.

Meenakshi hopes that she can also live there permanently. "This is safer than the graveyard, and we get food here", she says.

A different shelter house, located in Delhi's Bangla Sahib district, is providing safety for teenage rape victim Rama [named changed – ed.note]. In 2019, Delhi Police moved her to the Bangla Sahib shelter home from a government hospital. She had been sexually abused by her father and relatives.

Anjali Sonu, who is reading developmental studies and visited the Bangla Sahib shelter home for a project, says, "You'll find many girls of her (Rama's) age in the shelter home because they feel safe here. No one is molesting, physically harassing, or threatening to rape them here".

"Homeless women suffer the worst kind of violence, and are vulnerable to sexual abuse, exploitation, and trafficking", she adds.

Sanitation and washrooms remain a huge issue for women because only a permanent shelter home has private bathrooms.

"There are only five permanent buildings for women in Delhi, which can accommodate only 650 ladies", says Sunil Kumar Aledia, founder of the Centre for Holistic Development, an NGO working to house Delhi's homeless.

The Sarai Kale Khan shelter home only has one bathroom and two toilets for about 200 women.

"We have to take a bath in the open, asking our friends to guard that place. In summer, we take a bath with clothes on. But in winter we don't have spare clothes", explain various women residing at the shelter home while requesting anonymity.

Finding sanitary pads is also difficult, complain the women. But the Delhi Urban Shelter Improvement Board (DUSIB), the government agency responsible for managing shelter homes in Delhi, hands out sanitary pads to women every month.

Most of the women say they get the items two or three times a month, which they argue isn't sufficient.

Many of the women who end up in these shelter homes have fled abusive partners, been abandoned by their family after their husband's death, or suffered sexual violence, but it's not all doom and gloom.

Tabassum, 31, who now works as a guard at the Jama Masjid shelter home, was a drug addict a few years ago.

"Five years back, I was a drug addict. I used to beg, and use cheap drugs – inhalers, charas (hashish), weed, ganja (local cannabis), and what not".

"I used to beg at the steps of Jama Masjid Mosque and sometimes outside a Hindu temple and Gurudwara (Sikh temple) with my kids. The government NGO rescued my children and me and shifted us to the rehabilitation centre".

When asked if she's been victim of violence, she does not reply. Her husband left her years ago with three children, now aged between eight and 16.

"In 2017, I was shifted to the Jama Masjid shelter home along with my children. I asked the NGO if I could get some work. After a few months, they offered me to work as a guard here. It is the best thing that ever happened in my life. I'm getting paid for protecting my house", says Tabassum with a smile.