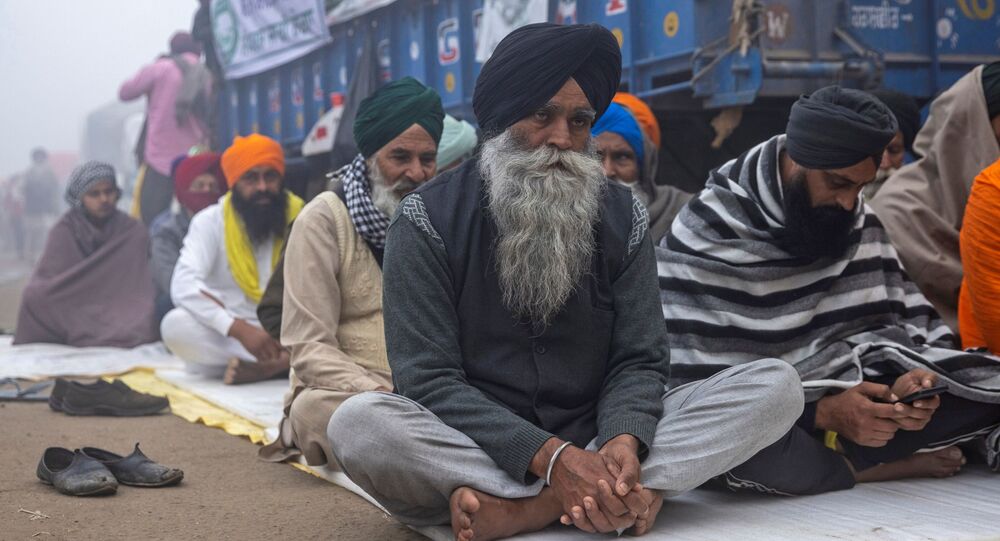 As part of one of the biggest protests the Indian capital Delhi has ever witnessed, thousands of farmers have gathered in and around the city to demonstrate against three newly-passed farm laws. Farmers from the states of Punjab, Haryana, Madhya Pradesh, Uttar Pradesh and Uttarakhand began marching towards Delhi on 26 November.

After about 12 days of relentless demonstrations in Delhi and on its outskirts, the farmers are set to execute a nation-wide shutdown called “Bharat Bandh” against the Prime Minister Narendra Modi-led Bharatiya Janata Party (BJP) government. The farmers are demanding the revocation of three farm laws passed during the monsoon season of the Parliament in September.

What Is Likely To Happen In and Around Delhi Today

After five rounds of talks between farmers and the government, a nationwide-strike has been called for by the protesting party throughout the entire day on Tuesday.

© REUTERS / ADNAN ABIDI
Bharat Bandh: US Lawmakers Back Indian Farmers' Protest Against 'Manipulative' Farm Laws
Between 11 a.m. and 3 p.m. (local time), farmers, especially in and around Delhi, will execute a typical “chakka jam” or roadblock that will affect traffic and movement in the national capital region (NCR).

Demonstrators are also likely to sit in vehicles and occupy toll plazas and highways which connect Delhi to the states of Haryana and Punjab.

Since several taxi unions in Delhi have expressed solidarity with the protesting farmers, commuting could be an issue for residents of the National Capital Region (NCR) today.

Along with Delhi, Punjab, Haryana and Uttar Pradesh, the repercussions of the farmers protest is also likely to be observed in other Indian states like West Bengal, Bihar and Maharashtra.

Police forces from Delhi as well as Haryana state have been deployed around the borders of the capaital in a bid to keep the situation orderly and disciplined.

Congress, which is India’s main opposition party, has supported the farmers in their protests.

The PM may not care but India sure does. Stand up for the rights of our farmers & join the movement.#BharatBandh pic.twitter.com/3lexCWWF2H

© REUTERS / DANISH SIDDIQUI
Delhi Chief Arvind Kejriwal to Visit Protesting Farmers Who Have Plans to Execute ‘Bharat Bandh’
Other parties which have announced their solidarity with the farmers include the Nationalist Congress Party (NCP), Samajwadi Party, Jharkhand Mukti Morcha and Maharashtra state’s Shiv Sena, among others.

Earlier, PM Modi has defended the new farm laws, saying the reforms were progressive. As of now, however, no official statement from PM Modi or Home Minister Amit Shah on today’s Bharat Bandh (general strike) been released to the public.

The Ministry of Home Affairs, however, has advised all states and Union territories to enforce Covid-19 health and safety protocols strictly and make adequate security arrangements during the nationwide shutdown strike.

What Businesses and Services Expected to Get Impacted in India Today

The transportation and truck unions of Punjab and Haryana states have decided to halt their services for the day.

Vegetable and fruit markets in Delhi as well as in other Indian states including Madhya Pradesh, Uttar Pradesh and Rajasthan, among others, will also remain non-operational during the nation-wide strike.

Hotels, restaurants and bars across Punjab state will remain shut down throughout the day.

Visuals from the protesters choking Delhi have gone viral on social media.

96,000 tractors and 12 million farmers are protesting on the Delhi border. This is the largest demonstration in the history of the earth.
Jai Jawan Jai Kisan#FarmersProtest#BharatBandhOn8December2020#आज_भारत_बंद_हैpic.twitter.com/giaKTQxRQq

What Are these Controversial Laws That Ignited The Chaos?

The three laws that sparked the controversy are: The Farmers’ Produce Trade and Commerce (Promotion and Facilitation) Act, 2020, the Farmers (Empowerment and Protection) Agreement on Price Assurance and Farm Services Act, 2020 and the Essential Commodities (Amendment) Act 2020.

The farmers fear that with these new laws, which liberalise agricultural markets and pave the way for agribusiness, the BJP government is backing away from its role as a price guarantor for their produce while leaving their earnings to be influenced by market forces.