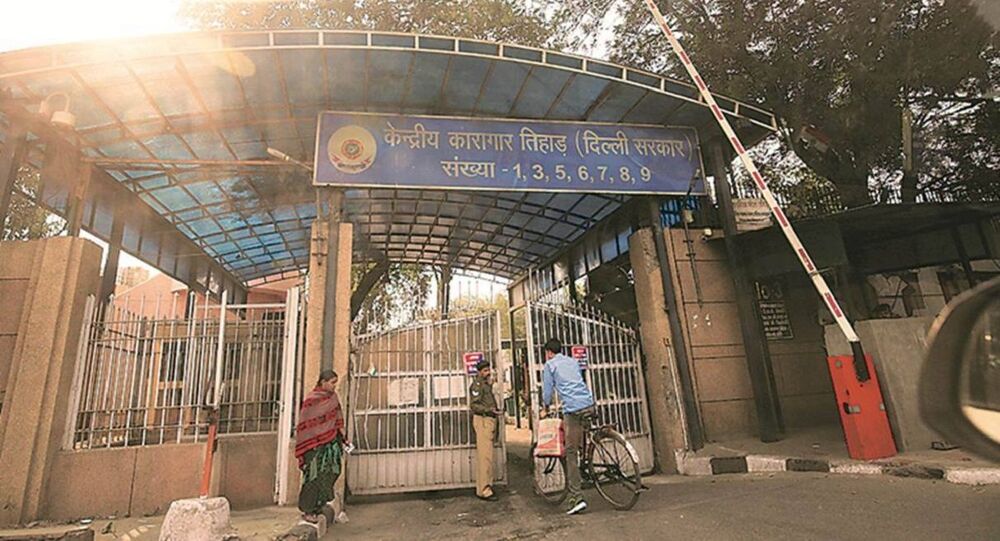 The Tihar Jail, the most populated prison in India, has three complexes -Tihar, Rohini, and Mandoli - all located in New Delhi. In the wake of the ongoing COVID-19 emergency, prison authorities have released around 2,800 prisoners on interim bail and extended parole in order to reduce the inmate population inside the detention facility.

A recent inquiry into the death of an inmate at India's largest detention facility, Tihar Jail, has revealed a modus operandi through which drugs and other contraband land in the prison from across the compound's walls. Later, they are sold to the inmates.

The racket came to light after a probe was ordered into the death of Sikander Dogra, who had complained about drug smuggling inside the jail in September. Two days later, Dogra was allegedly stabbed to death by four prisoners.

Speaking to Sputnik, a prison officer revealed that an inquiry into the drug smuggling inside the jail had unearthed that the narcotics were being smuggled in with outsiders’ help. It was being done in a systematic manner to avoid getting caught or arrested.

“It has been found that the outsiders, mainly gang members of the inmates, have been throwing drugs or banned contrabands inside the prison over the boundary walls”, the officer said.

He further shared that there have been instances in the past in which they found mobile phones being used by prisoners. However, this is the first time that they have come across an organised network throwing drugs into the prison compounds.

© AP Photo / Manish Swarup
India Passes Ordiance Stipulating Up to 7 Years in Jail to End Violence Against Health Workers
As Sputnik spoke to a few former inmates, they revealed that there were some gangs who had developed ways to get banned items inside the jail premises for years and are still running a nexus right under the nose of authorities.

"The gangs operate in a manner that their members outside the prison throw the packets inside over the boundary and once they are thrown inside, the packets are picked up by the prisoners and then sold to other inmates. Getting banned items inside through the main gate is difficult because of the multi-layer security”, a former prisoner, known as Chota Raju in the crime world, told Sputnik.

He further revealed that inside the prison, the price of drugs or banned items increases multiple times compared to what they cost outside.

“A packet of weed or hashish costs less than INR 100 or INR 3,000 ($1.3 or $40) outside, but the cost increases three to five times inside the jail. There are several gangs inside each jail who trade in such banned items”, Raju said, adding that there are many buyers.

Recently, the Delhi government along with the non-governmental organisation Society for the Promotion of Youth and Masses (SPYM), has conducted a survey in the Tihar Jail to gauge the relation between drugs and crime.

More than 77 percent of the inmates reportedly accepted that they had been active users of drugs at least some weeks or months before committing their crimes.

From a central jail that could lodge only 1,273 prisoners, to becoming South Asia's largest prison complex that houses over 17,500 inmates, Tihar's journey is ridden with controversies and brushes with high-profile prisoners.

Prison Authorities – Keeping an Eye Out

As per Sandeep Goel, the director general of Delhi Prisons, it is the duty of the prison department that no contraband item enters the jail's premises.

“Our officers are briefed to always be on alert and prevent any entry of any banned items inside the jails”.

After learning about the organised crime in the jail, Goel stated that most of the time, gang members operating from outside escape upon getting caught.

“We have spotted/identified several drop zones. We have marked them and recommended large fishing nets to be placed between the prison walls and the road’s boundary wall (outside) to ensure that banned items do not land at these drop zones and get caught in the net”, the official said.

Over the years, many cases of drugs or cell phones being smuggled inside people's bodies have been reported. Recently, a video of prisoners exposing the smuggling of phones into the prison also went viral on social media. In the footage, they alleged that jail officials have been involved in the smuggling scheme.

© AP Photo / Drug Enforcement Administration
Drug Traffickers Minting Money in Pandemic to Smuggle 'Happy Pills' Into India from Europe
Often, prisoners have had to be taken to hospital after failing to remove the smuggled goods hidden in their body cavities. Despite longstanding demand for body scanners inside the prison, one official revealed that the government is yet to approve it.

Meanwhile, a prison expert told Sputnik that it is difficult to smuggle a single good inside the prison without the knowledge of officials.

"Over the years, many cases have come up where unauthorised items or goods are being smuggled inside the jails. Prisoners can't move freely to all parts of the jail. So, it is the jail officials who often pick the banned items. The authorities must consider the involvement of jail staff and taken strict action against those found guilty ," Sunil Gupta, a former Tihar Prison law officer, said.