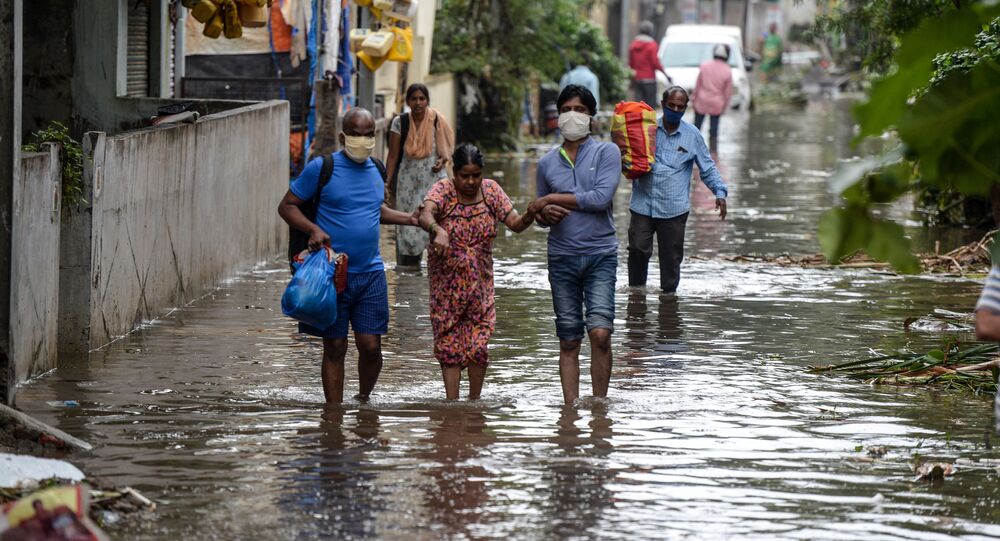 Over 50 people have died in the last three days and property worth millions of rupees has been damaged due to heavy rains and flash floods in India's Telangana State, where there has been no respite from the continuous downpours.

The Indian city of Hyderabad witnessed torrential rain overnight on Saturday, which led to flooding in several parts of the state; many houses were inundated.

Shocking scenes of the devastation from different areas including Chandrayangutta, Nampally, Abids, Kothi, Basheerbagh, Khairatabad, Goshamahal and Vijayanagar have been doing the rounds on social media on Sunday.

Telangana Director General of Police (DGP) Mahender Reddy has alerted all police officials to monitor the situation in their respective areas.

"Keep monitoring the situation in your area as flash floods may trap people in low lying areas. Brief your staff to act accordingly and see that no inconvenience is caused to the citizens," Reddy said to Indian news agency IANS.

Rescue operations are underway to provide relief to people who have been stranded on the roads.

​Police in Abdullapurmet area, located on the outskirts of the city, extracted a car which had had become inundated by the deluge with the help of a JCB machine in Rachakonda district.

#WATCH Rachakonda: Abdullapurmet Police pulls out a car stuck in overflowing water with the help of a JCB machine. #Telangana (17.10) pic.twitter.com/AWEC4q1UQc

​Several people, stranded in their homes, took to social media to post videos and pictures of their communities being flooded and cars floating.

After a bout of heavy rains last night, Chandrayangutta area of #Hyderabad has turned into a virtual island. Disaster Relief Teams are using boats to rescue stranded residents here. Water has been overflowing following the collapse of Balapur lake bund #HyderabadFloods pic.twitter.com/oj9mE4l5BL

Horrifying visuals from Baba Nagar coming in. Please pray for everyone, this flow is massive.

The danger is not over yet for the residents of Telangana, as India Meteorological Department in its forecast for Sunday said that light to moderate rain or thundershowers were very likely to occur in some parts of the city.

All Officers,
As @metcentrehyd issued #HeavyRains alert @ next 5 days.
Keep monitoring the situation at your areas, as its intensive spell, #flashfloods may trap people @ lowlying areas.
Brief your staff to act accordingly & see that no inconvenience is caused to #TheCitizens. pic.twitter.com/05opZ5yDCn