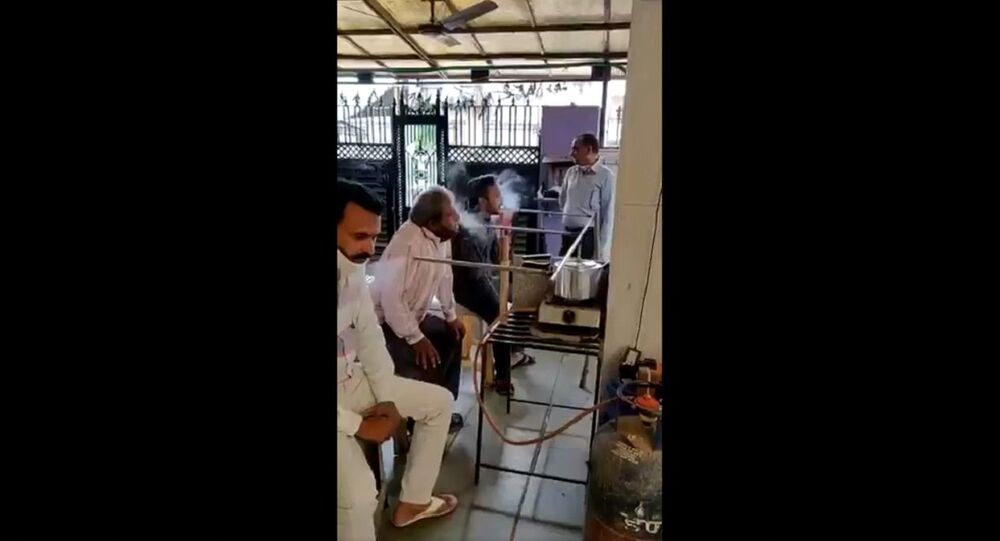 The Indian city of Pune has recorded more COVID-19 infections than any other city in the country. Over 250,000 people in the city have contracted COVID-19 so far. Meanwhile, India's coronavirus caseload crossed the 5.7 million-mark on Thursday, as per the latest government figures.

A viral video of people queuing up to inhale steam at a 'Steam Bar' has been doing the rounds on social media.

In the clip, people wearing masks can be seen inhaling steam from pipes, in what Twitter users have called call an attempt to "treat or prevent"coronavirus.

​Many social media handles who have tweeted the video have claimed the 'steam bar' is located Pune, Maharashtra state, and local officials say it is being probed.

"We have seen the video. At this stage, we can't confirm if the video was shot in Pune," an official from the Pune Municipal Corporation told Sputnik.

The official disclosed that the matter is being looked into by the Information Technology (IT) Department of the Pune Municipal Corporation.

"We will seek help from the police to investigate the video," the district official added.

Some social media handles who shared the video, however, claimed the facility is located in Ahmedabad, a city in Gujarat state.

The World Health Organisation (WHO) has warned against the reliability of steam therapy in treating coronavirus, in the wake of several fake claims doing the rounds of various WhatsApp chatrooms and other social media channels.

Some persons have also misleadingly claimed that adding certain ingredients to the boiling water, as it turns into steam, has been proven to be an effective remedy against the COVID-19 virus.

"Steam inhalation does not cure COVID-19 and is not a safe treatment, as it may cause serious burns. No matter how hot the steam is, it will not reach the virus present in the cells of the infected individuals," the WHO has stated.

Indian authorities have warned in the past that spreading rumours or circulating fake news about COVID-19 could attract penalties, including jail sentences.

Pune has witnessed a significant spurt in the number of COVID infections over the last few weeks. As of Tuesday, the city's coronavirus caseload breached the 250,000 mark.

According to India’s federal Ministry of Health and Family Welfare, there are more than 966,000 active cases in the country, with 91,149 deaths so far. More than 4.67 million patients have been cured or discharged there so far.