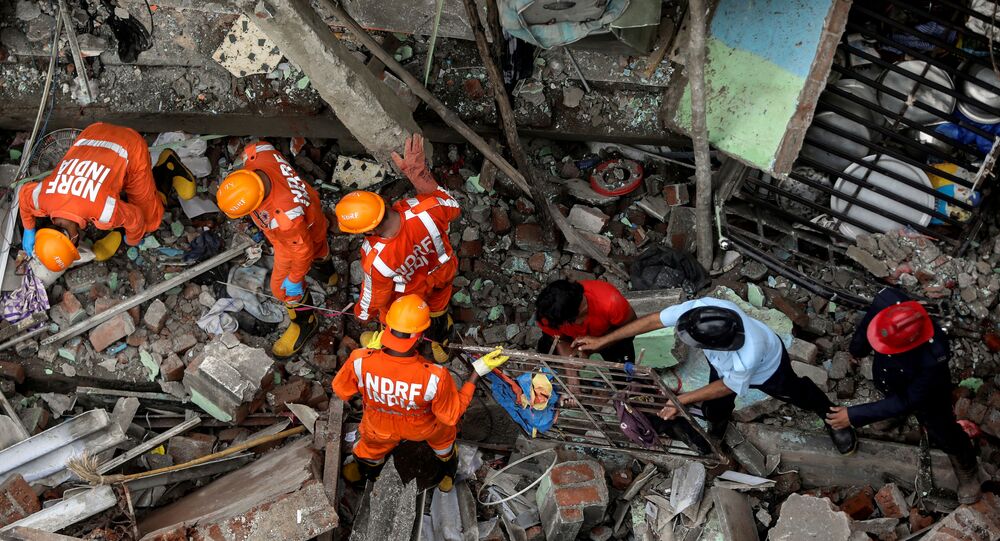 In the early hours of Monday, a three-storey residential building in Bhiwandi, a city near Mumbai in India’s Maharashtra state collapsed, leaving many people under the rubble.

In the day since a building crumbled in the Indian state of Maharashtra near Mumbai, the death toll in the incident has risen to 20. The deceased include eight children aged between 2 and 14.

The incident occurred in Bhiwandi, a city of over 700 thousand people approximately 15 km away from Mumbai. Around 20-25 people are still feared trapped under the debris, with the National Disaster Response Force (NDRF) telling the media that their chances of survival are minimal.

Despite this prognosis, the operation to rescue people from under the rubble has been underway for over 24 hours.

© REUTERS / FRANCIS MASCARENHAS
10 Killed, Many Trapped: 40-Year-Old Residential Building Collapses Near Mumbai - Photo, Video
The National Disaster Response Force (NDRF) along with the local police officers and residents from the neighbourhood have collectively been trying to rescue people stuck under the building's debris since early Monday.

Those injured are being treated at the Indira Gandhi Memorial (IGM) hospital, located in the city.

The building housed around 62 residents who were believed to be asleep when the building collapsed at around 3:30 a.m. (local time) on Monday.