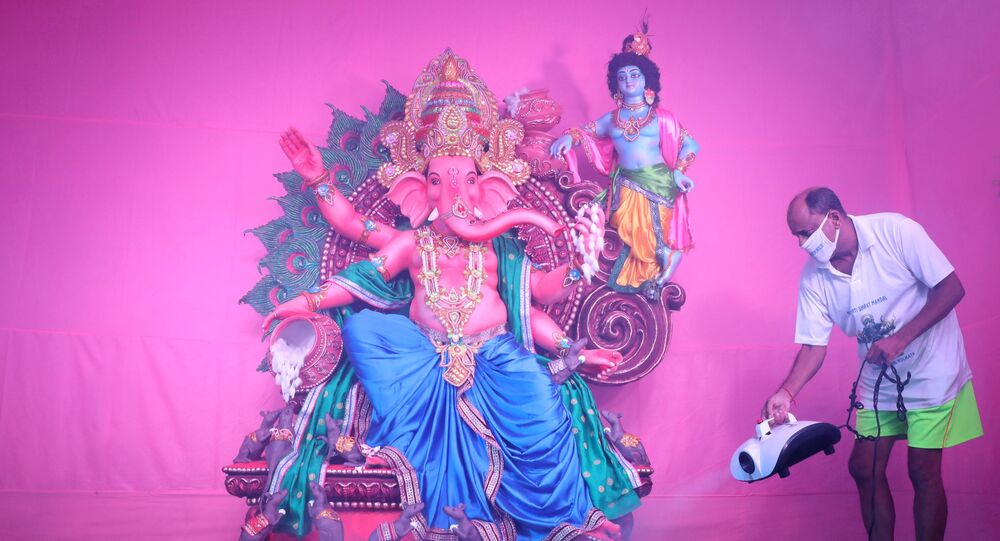 New Delhi (Sputnik): Drenched in a glorious past and cloaked with traditions and culture, festivals showcase the spirit of the Indian way of life. As celebrations and reminders of India's secularity, its 1.35 billion people get together in at least 36 annual festivals, most of which begin after Ganesha Chaturthi.

Indians are beginning to celebrate Ganesha Chaturthi, or the birthday of Lord Ganesha on Saturday, and the festivities will continue for 11 days in different parts of the country. In the state of Maharashtra, it is the most awaited occasion of the year.

Worshipped as "Mangalkarta", a God of auspiciousness, and "Vighanharta", the one who can help in a person's most miserable moments or against bad omens, the elephant-headed God evokes great reverence across the country year-round.

During the Ganesha Chaturthi festival, as per old traditions, ardent devotees of Lord Ganesha bring home his idols and worship and host the deity for three to eleven days. The idols are later submerged in water as a farewell to the divine guest.

In Maharashtra, one finds a sea of devotees participating in these festivities especially when the tens of thousands of idols are taken for immersion.

With the fear of COVID-19 gripping everyone, the annual grand celebrations for Ganesha Chaturthi marking the birthday of Lord Ganesha in the country, have been affected.

For the first time since 1935, the festival of Ganesh Chaturthi has commenced with without its usual fanfare.

In view of the traditional style of mass gathering during Ganesha Chaturthi, during roadside worship of the idols in makeshift temples or other places, the government authorities want this year's festivities to a restricted affair.

Hence, public celebrations of festival have been cancelled across the country.

The novel coronavirus, which began spreading its deadly tentacles around the globe in December 2019, has infected more than two million Indians, leaving over 54,000 dead.

Maharashtra's Famous Celebrations Amid The Pandemic

Worshippers including celebrities, politicians, and travellers from around the world congregate in Mumbai to witness the glory of this idol, famous for its emotive facial expressions called "bhav" in Hindi.

"In 1935, my great grandfather Madhusudan D Kambli sculpted the first ever Ganpati idol called 'Lalbaugcha Raja', which was five-feet high. I joined my ancestral business of sculpting Ganesha idols in 2002", sculptor Santosh Kambli shared with Sputnik.

"This is the first and hopefully the last time in history that 'Bappa' (as Lord Ganesha is fondly referred to by devotees) isn't coming in all his glory", Kambli, the sculptor of one of India's most famous public Ganpati idols, added.

He says this year some people are buying eco-friendly idols that they can immerse in a bucket full of water at home, because public gatherings are a risky affair right now.

Only idols from two to four feet tall have been permitted considering the situation surrounding proper submerging rituals after 11 days.

"This year, the eerie numbness of the instruments in our workshops, the air around us not smelling like wet mud and paint, and the realisation that Bappa is not being celebrated is overwhelming. Mumbai feels as if its at a lifeless standstill", Kambli added.

Dutta Kumbhar, National President of India's Mati Kala Vikas Kendra (a clay arts development centre) recently revealed to the media that Ganesha idol makers from the state of Maharashtra alone are expected to suffer losses worth $53.35 million due to the pandemic.

"Around 70,000 Ganpati idols over four-feet tall were already made for public display before the pandemic situation worsened in India", Kumbhar added.

According to Sagar Shirodkar, an eco-friendly idol maker from Pune, Maharashtra, this Ganesha festival is their highest earning period of the year.

"We give our artists bonuses at this time, rather than during the Diwali festival. But this year, there is sadness all around. Sales have taken a hit", Shirodhkar told Sputnik from Pune.

"Most of our artisans travelled back to their native villages after the first lockdown was imposed in March. They have not been able to return to the cities to resume work on the incomplete idols. This year, we find ourselves in the middle of nowhere during our most important festival", he shared.

This year, however, areas famous for their annual Ganpati celebrations across India, including Lal Baug in Mumbai, are hosting plasma donation camps.

Others are also creating social welfare provisions to help those in need defeat this health crisis.

The famous Dagdu Sheth Temple in Pune, home to the grand idol of Ganapati Bappa (another name for Lord Ganesha) dressed as a sweet-seller has decided to stream prayer rituals live on social media during the 11-day festivities. It is meant to help people have an audience with Ganesha and avoid roaming around for it.

A post shared by Shreemant Dagdusheth Ganpati (@dagadushethganpati) on Aug 21, 2020 at 7:32am PDT

A post shared by Shreemant Dagdusheth Ganpati (@dagadushethganpati) on Aug 21, 2020 at 8:22pm PDT

The first day of festivities is marked as the annual homecoming of Goddess Parvati and her son Ganesha. As per Hindu scriptures, the deities along with Ganesha's father Lord Shiva are believed to reside in the Himalayan mountain Kailash.

Hindus believe Ganesh Chaturthi, while marking the string of annual celebrations in India until Christmas, offers devotees a chance to connect with their gods in person. Hence, it's also an emotive occasion for more religiously-minded individuals.

Friends and families usually gather during these 11 days and exchange sweets and gifts. They go around the city, visiting Ganpati idols set up at different places. Idols kept at home are offered regular prayers and special offerings, later distributed among relatives and neighbours. The sale of eco-friendly Ganpati idols remains high despite the health crisis.

And the last day of worship concludes with the immersion of idols in water, usually rivers or other bodies.

This year, however, people have been instructed to limit their celebrations within their homes.

​After crowds ended up gathering in parts of Mumbai shopping for prayer commodities, local police across the nation have been instructed to maintain discipline in the lockdown restrictions and ensure no mass gatherings take place.