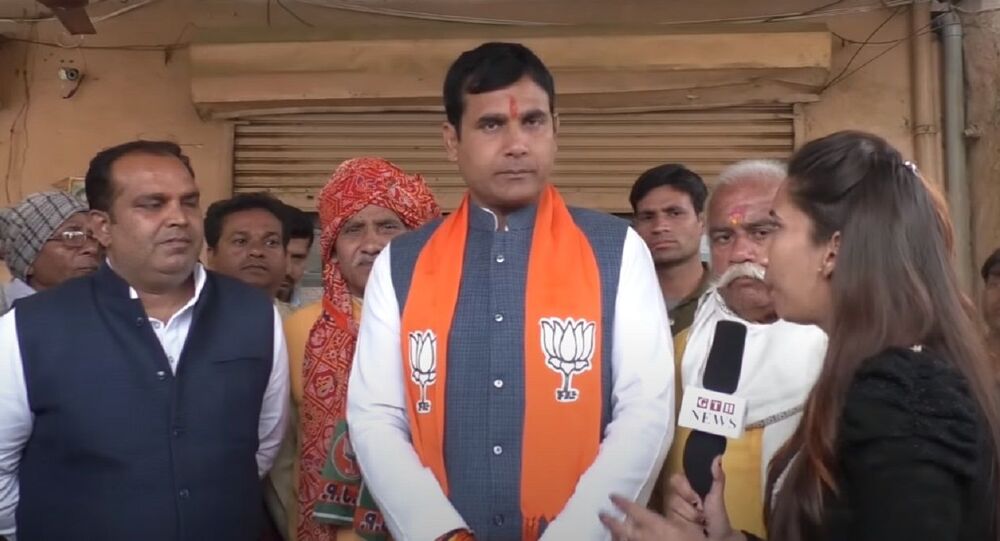 New Delhi (Sputnik): With Eid ul-Adha, one of the biggest Muslim festivals of the year, around the corner, lawmaker Nand Kishore Gurjar from the state of Uttar Pradesh's Hindu nationalist ruling Bharatiya Janata Party (BJP) caused a Twitterstorm when he controversially stated that people should "sacrifice their children instead of animals".

Two days after asking Muslims to sacrifice their kids rather than animals during the Eid festival, Nand Kishore Gurjar, a BJP legislator from the Indian state of Uttar Pradesh, has refused to apologise or withdraw his remarks, the Hindi daily Aaj Tak has reported.

The politician has told the daily that he received praise from the Muslim community and clarified his remarks by saying that the ritual slaughter leads to the accumulation of remains of the sacrificed animals, where contagious diseases like Coronavirus could originate.

The statement has drawn attention from netizens, most of whom expressed shock at the insensitive remarks of the Bharatiya Janata Party (BJP) lawmaker.

Me says: Even the nationwide lockdown couldn't stop it

People on Eid should sacrifice their children, instead of animals, says BJP MLA in Uttar Pradesh https://t.co/1iyJjkcOIk

People on Eid should sacrifice their children, instead of animals, says Nand Kishore Gurjar (BJP MLA in Uttar Pradesh)

Shri Nand Kishore Gurjar ,BJP MLA is a very creative person ......What is he doing in poltics?????He should have been in Hollywood writing scripts .......

BJP MLA Nand Kishore Gurjar asked people celebrating Eid ul Adha to sacrifice their children instead of animals.
From Last 6yrs India has Become Biggest Meat Exporter
From last 6yrs BJP Ruling this Country
So Why this Much Hypocrisy At time of #EidAlAdha #Islamophobia pic.twitter.com/yUx6Uy8XGz

​As per Islamic rituals, Eid ul-Adha is the festival of sacrifice. To mark the day, male goats, cows, sheep or camels are sacrificed and mutton dishes are prepared.

Performing extra prayers in the morning are how most Muslims begin celebrating the festival. Usually, mosques across the country remain crowded. This year, due to the pandemic, public gatherings are restricted.

The festival will be observed tomorrow, 31 July.