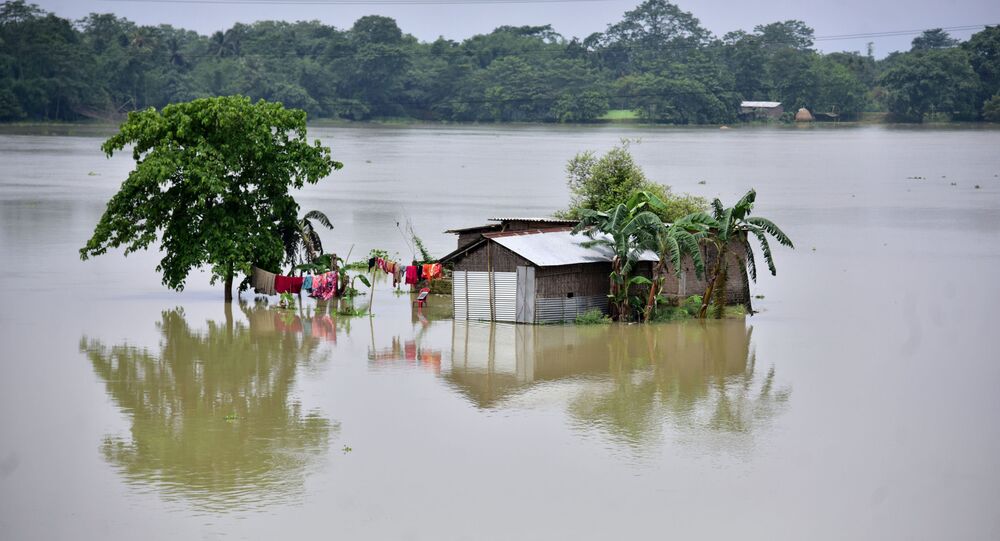 New Delhi (Sputnik): India has been dealing with a number of natural disasters like cyclones, floods, lightning, and forest fires, which have led to catastrophic results in the last few months. With the approaching monsoons, the situation is only becoming more tense.

Three people were killed and eight others are missing following a cloud burst in a village in the Pithoragarh district of Uttarakhand on Monday morning.

VK Jogdande, Pithoragarh’s district magistrate has revealed that a rescue team is present at the spot, trying to help stranded people and find missing residents of the severely affected area.

Some videos and pictures depicting the horrific situation in the region have found their way to Twitter.

#cloudburst in Uttarakhand's Tanga Village in #Pithoragarh , reports suggest 3 people burried under debris and 11 people yet to be traced. pic.twitter.com/9OLWxa2aro

​Over the weekend, at least 10 people from the eastern state of Bihar lost their lives after being struck by lightning. In the last three weeks, over 160 people have died due to lightning strikes in the state.

State Chief Nitish Kumar has announced financial aid worth INR 400,000 ($5,335) to the families of the deceased, however, netizens are still seeking to get rapid medical help sent to those affected.

Ladies and Gentlemen this is Bihar.
Where there is no facility, the hospital has become a ruin.
No infrastructure, Lack of Doctors and nurses. Poor State.
Nitish kumar is CM for the past 15 years. 😭😭😭😭
State under th®eat (corona, flood and lightning)pic.twitter.com/sDuoklPwtI

​Meanwhile, India’s famous tea state Assam has been drowning in heavy rain and floods over the past several weeks. Along with people, rare animals like rhinos have also been reported dead in the area.

More than 200 people (79 in Assam) have lost their lives, while millions have been displaced in Bangladesh and Nepal due to severe flooding. The Assam government also noted that around 96 animals from the famous Kaziranga National Park have died. Kaziranga National Park is a UNESCO World Heritage site and home to at least 2,400 one-horned rhinos.

Heart-wrenching videos from the area have led netizens to start fundraisers via social media to help the beautiful and scenic northeastern part of India, currently struggling with natural calamities.

It’s just heartbreaking to see Assam been affected with the heavy floods amidst the global pandemic. With so many lives lost, I really hope everything gets better soon.. Let’s Pray For Assam 🙏🇮🇳 #AssamNeedsHelp pic.twitter.com/niFYdgs9Pi

The people of Assam need our attention. Floods and landslides have claimed 102 lives. pic.twitter.com/grFI1DZzvZ

​Earlier between May and July, cyclones Nisarga and Amphan lashed the states of Maharashtra, Gujrat, Odisha, and West Bengal leading to the deaths of around 124 people.

Terrifying Images & videos of Super Cyclone #Amphan emerging. I continue to pray
for the safety of all in #WestBengal and #Odisha - my heart goes out to all #myhome 💔 🙏🏽 pic.twitter.com/ka0yq63Its

​Intense nationwide locust attacks and back-to-back earthquakes in India have also added to the pandemic panic across the country.

Scary stuff. What rain did this morning to a road & slum cluster just off Delhi’s central ITO-Ring Road. #DelhiRains pic.twitter.com/WwRC1G0q0F