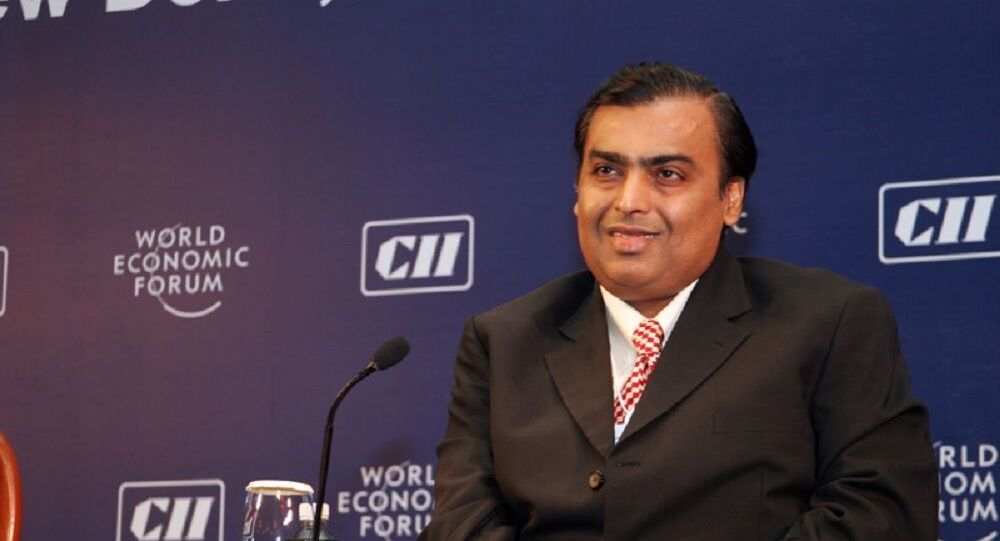 New Delhi (Sputnik): India’s Reliance Industries has been on a fund-raising spree since April. Beginning with Facebook’s $5.8 billion purchase of a 9.9 percent stake in Reliance’s telecom platform Jio, the company has seen 13 mega investments worth $15.33 billion in the last two months from global investors.

According to the Bloomberg Billionaire Index, as on 14 July, Mukesh Ambani, the chairman and managing director of India’s Reliance Industries, is the sixth wealthiest man in the world, with $72.4 billion.

This is after his net worth climbed over $2.17 billion on Monday, as the company’s stock price in India continued to soar. Investors are expecting mega announcements on 15 July, when Ambani will address the Reliance group’s annual general meeting. RIL's three core areas of business are the energy, telecom and retail sectors.

Ambani is poised to join the elite club of the top five richest persons in the world; he's already sent Twitter users into a tizzy; some have pointed out the fact that at least someone is having a good 2020.

Now someone is having a very good 2020💃💃😅😅
Mukesh Ambani >>>>> Warren Buffett#MukeshAmbani pic.twitter.com/OT1ctXsptG

#MukeshAmbani who became 6th richest person in the world after crossing #LarryPage !! That smile ! 😛 pic.twitter.com/NkI1pGZ7SR

#MukeshAmbani to #WarrenBuffet after becoming 7th richest man in the world. pic.twitter.com/fCrBR6QzyK

Twitter users also acknowledged this as a proud moment for India.

​Good wishes have poured in.

your smile is very innocent sir respect you god bless you you are a inspiration to me and many other like us.

According to the Bloomberg billionaire index, the top spot is held by Amazon’s Jeff Bezos, who has a total net worth of $184 billion, followed by Microsoft co-founder Bill Gates, who is worth $115 billion. Ranking third is French businessman and art collector Bernard Arnault, whose net worth is $94.5 billion, followed by Facebook’s Mark Zuckerberg, who is worth $90.8 billion.

Ambani's company had been on a fundraising spree; its telecom arm, Jio Platforms, has wooed global investors in the last two months, raising $15.33 billion in its plan to become a debt-free company by March 2021.

In a statement promising the strongest balance sheet, Ambani said to shareholders last month, “I have fulfilled my promise to the shareholders by making Reliance net debt-free long before our original scheduled date of 31 March 2021. We have received strong interest from strategic and financial investors in our consumer businesses, Jio and Reliance Retail. We will induct leading global partners in these businesses in the next few quarters, and move towards the listing of both these companies within the next five years. With these initiatives, I have no doubt that our company will have one of the strongest balance sheets in the world."

After Facebook, global investors like Vista Equity Partners, General Atlantic, KKR, Silver Lake and Mubadala had made investments in the company.