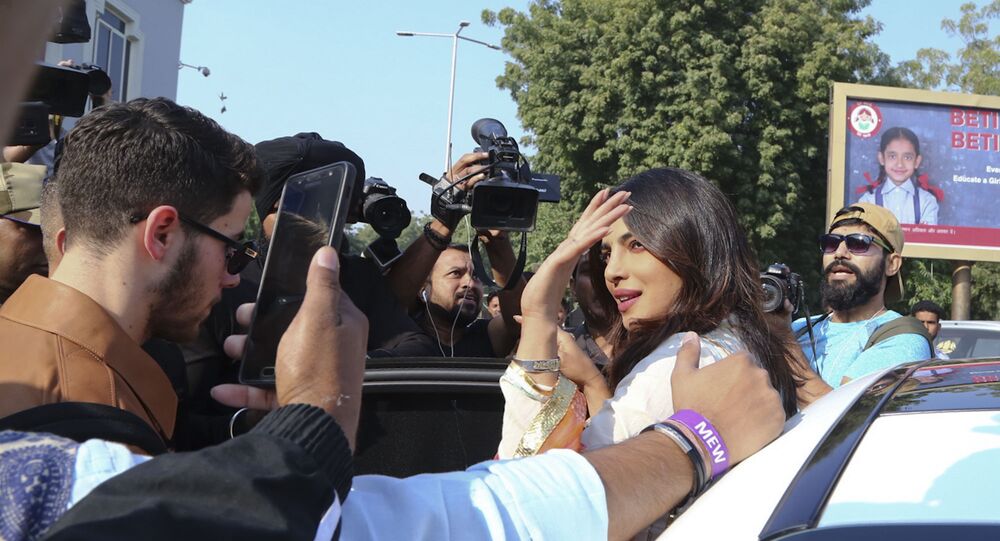 New Delhi (Sputnik): Still reeling from the grief of losing two of their own - Rishi Kapoor and Irrfan Khan - Bollywood joined hands with Hollywood to host the a fundraiser called "I for India". This star-studded in-your-living room concert was streamed worldwide on Facebook.

With the aim of collecting funds to donate to a non-profit Indian NGO called GiveIndia, top Bollywood directors Zoya Akhtar and Karan Johar curated the fund-raising concert -- "I for India".

From Bollywood biggies like Shah Rukh Khan, Kareena Kapoor Khan, Priyanka Chopra Jonas, Akshay Kumar, Gulzar and AR Rahman to international names like Mick Jagger, Mindy Kaling, Nick Jonas, Will Smith and Russel Peters - the “I for India” concert brought together artists from around the globe, who were willing to help Indians in need.

We bring you India’s biggest at-home concert - #IforIndia, a concert for our times. Click the donate button and make a difference. Sunday, 3rd May, 7:30pm IST. Watch it LIVE worldwide on Facebook. Tune in - Facebook.com/facebookappindia  Donate now - (Link in bio) Do your bit. #SocialForGood 100% of proceeds go to the India COVID Response Fund set up by @give_india

As part of his performance, Bollywood’s “King of Romance” Shah Rukh Khan turned into a singer-rapper. His performance, viewed by millions worldwide, also featured his youngest munchkin AbRam Khan, whose cuteness quotient totally stole the show. The message of Shah Rukh’s fun singing performance was – “everything will be alright”.

Straight from the US, actress Priyanka Chopra Jonas connected with viewers via a moving poem by Indian poet Vijay Maurya. Recited by Priyanka, the poem captured the essence of this unprecedented time, citing how the breeze seems to be upset with us right now, and how much we all want to break free, get into our cars and drive away on roads unknown. The poem later goes on to request people to stay for a while, and wait till everything is better again.

In Priyanka’s own words, “Let's hold on world... let's keep our hopes alive and wait for the world to heal.”

This beautiful poem has so much relevance right now. Thank you my friend @vjymaurya for writing this insightful composition about this unprecedented time. Let's hold on world... let's keep our hopes alive and wait for the world to heal.🙏🏻 Happy to be a part of #IforIndia #SocialForGood Donate now: Link in bio 100% of proceeds go to the India COVID Response Fund set up by @give_india

Actress Alia Bhatt, who has been personally been grieving and dealing with the demise of boyfriend Ranbir Kapoor’s father Rishi Kapoor, also participated in the concert. Known for her acting skills, Alia is loved in India for her singing abilities. As part of her performance, Alia, along with her sister Shaheen Bhatt sang a magical rendition of a popular Hindi song, “Ik Kudi”. The sisters collaborated with singer and composer Ankur Tewari who added music to their performance.

Other B-towns celebs like Kareena Kapoor Khan, Saif Ali Khan, Akshay Kumar, Ayushmann Khurrana and Varun Dhawan boosted the shrunk morale of locked up people around the world with words and entertained them with songs and dances! Madhuri Dixit, Abhishek Bachchan, Hrithik Roshan, Parineeti Chopra, Aishwarya Rai Bachchan and others also joined in to do their bit in the fundraiser.

joins in on #IForIndia streamed live on Facebook , shares hope that this too shall pass and urges people to help those in need amid the spread of COVID-19! @give_india #IFORINDIA #Monday #ManavManglani

International pop-stars – the Jonas Brothers shared details about the “I for India” initiative on their social networking handles, while in a short video clip, Hollywood heartthrob Will Smith called India his home away from home.

"India holds a really warm and special spot in my heart. It's really like a home away from home for me,” the actor said.

The concert was inspired by the eight-hour long “One World: Together At Home” online event organised by Lady Gaga, the Rolling Stones and Stevie Wonder earlier in April. The concert managed to collect $127.9 million in donations.

India’s federal Ministry of Health and Family Welfare has recorded 42,533 coronavirus cases in India with 1,373 deaths.