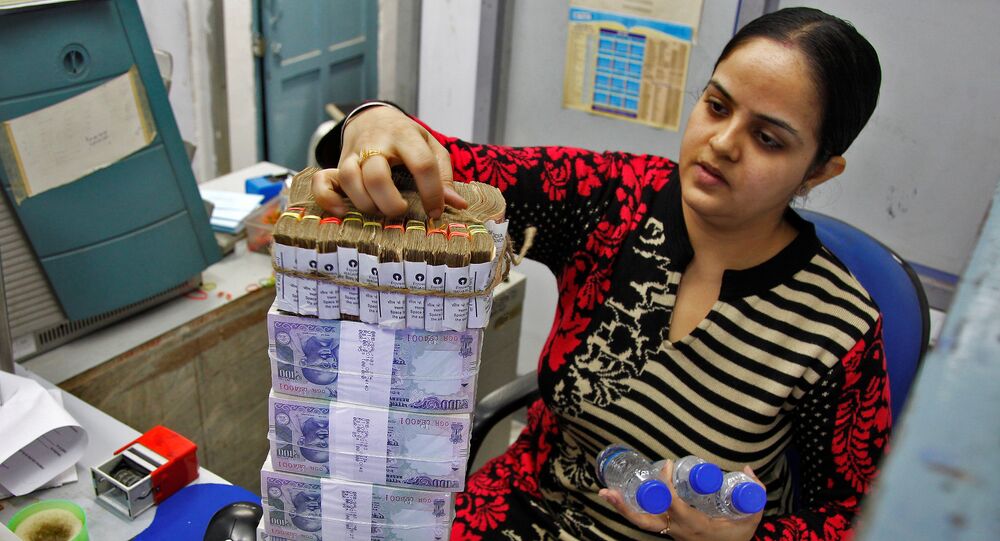 New Delhi (Sputnik): India’s currency has been feeling the pressure ever since the COVID-19 pandemic hit the country's economy. From a level of 73.5 to a dollar a month ago on 17 March, the national currency has come down to the current level of over 76 per dollar.

The Indian rupee weakened to a record low against the US dollar in early trade on Thursday. The rupee traded at 76.85 against one dollar. India's currency closed at 76.44 on Wednesday. Several factors, including flight of foreign capital from Indian markets, have weakened the national currency.

In the early trade on Thursday, the Indian currency opened at 76.74, compared with the previous closing level of 76.44, breaching last week’s low of 76.55 per US dollar. The Indian currency then continued to depreciate to a fresh record low of 76.85.

The depreciation of the Indian currency against the US dollar is due to a rampant flight of foreign capital from the equity markets. So far in April, investors have withdrawn investments worth about $1.3 billion from the domestic debt market.

Additionally, investments worth $15 billion were withdrawn by foreign institutional investors in the month of March itself. These factors have put a lot of pressure on the Indian currency. With the large-scale withdrawal by foreign investors, India's equity markets have tanked in the last one and a half month. From the over 41,000 points at the end of February, the Bombay Stock Exchange’s 30 share index has come down to 30,600.

Meanwhile, COVID-19 cases in India have spiralled to 10,477 infections as of Thursday, with 414 casualties, while 1,488 people have recovered from the disease.