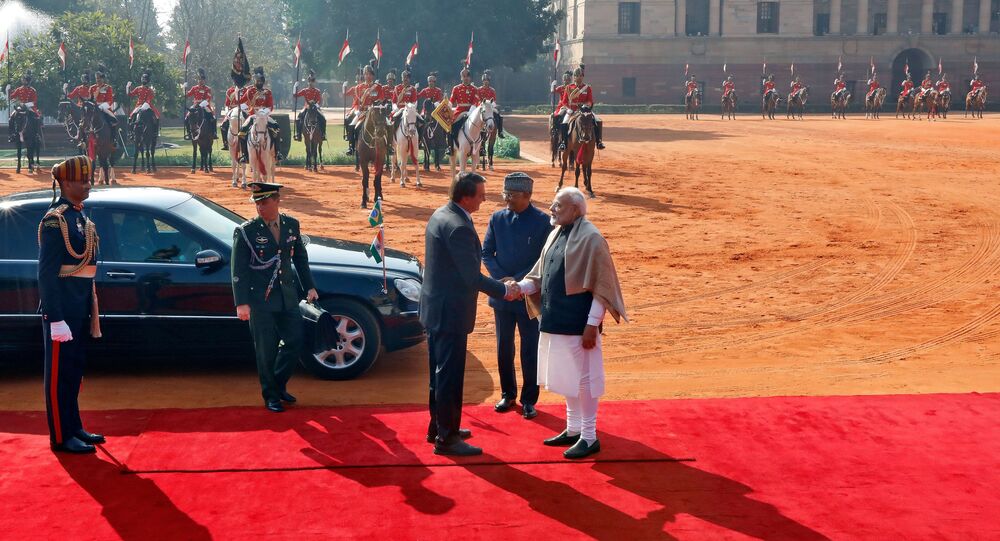 MOSCOW (Sputnik) - Brazil and India have exchanged a number of memorandums of understanding to reinforce mutual cooperation, laying a foundation for the establishment of investment opportunities and the development of bioenergy, medicine, information technology (IT), as well as tourism among others, the Indian Foreign Ministry said on Saturday.

In a move to improve the bilateral relations, the two countries agreed on 15 memorandums, including the "Investment Cooperation and Facilitation Treaty b/w the Republic of India and the Federative Republic of Brazil," according to the Indian ministry.

Additionally, South American and South Asian countries will work in the bioenergy industry.

"MoU [memorandum of understanding] between Indian Oil Corporation Ltd. Of the Republic of India and Centro Nacional de Pesquisa em Energia e Materiais (CNPEM) on Cooperation for establishing a nodal institution in India to carry out research on Bioenergy," one of the memorandums, published on the foreign ministry’s website, read.

Brazil and India are also looking forward to cooperating in the fields of health and medicine as well as to stimulate the cultural exchange in the next four years.

© AP Photo / Saurabh Das
Unity in Diversity: Is It Real for India?
Brazilian President Jair Bolsonaro, who is currently visiting New Delhi to attend India’s Republic Day celebrations, is the third Brazilian leader to come to the South Asian country since the relationship between the two nations took a nosedive in 1961 when Brazil opposed India’s move to liberate Goa from Portuguese rule.

Relations between the two nations remained unfriendly throughout the decades, even though both countries were members of such associations as BRICS, IBSA, G20 and in international organisations such as the United Nations.