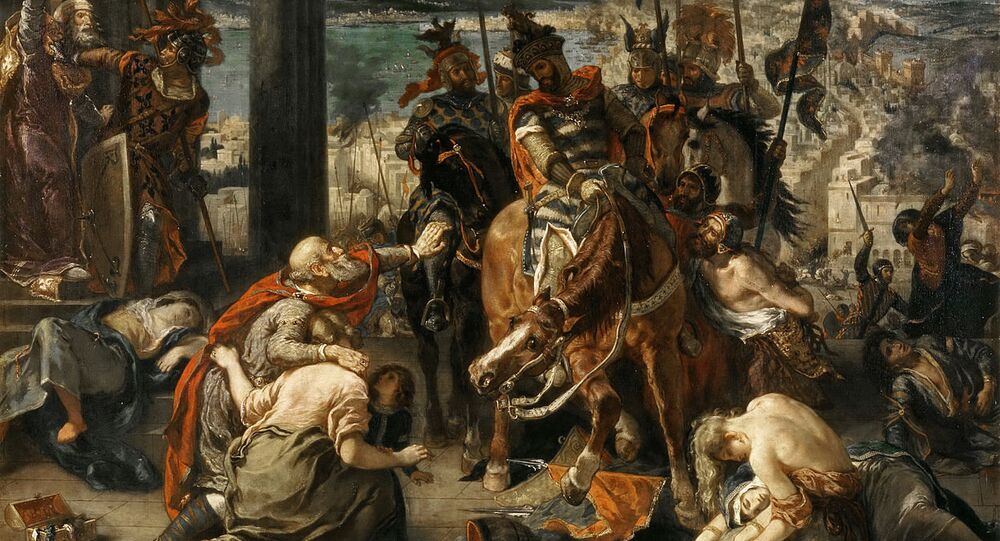 The Curse of the Maritime Empire: How Bubonic Plague Nearly Destroyed Constantinople

An outbreak of an incurable disease severely damaged the mighty Byzantine Empire, killing millions of people around the Mediterranean. Its name was the Plague of Justinian and it hit Constantinople in 541 AD.

Dozens of merchant ships docked at the port of Constantinople daily, bringing in and shipping out oil, timber, salt, silk, and grain. Under emperor Justinian I, whose reign stretched from 527 to 565 AD, the Byzantine (or Eastern Roman) empire was the center of global trade, earning around 20 tonnes of gold in revenues annually. By the early 6th Century AD, the empire’s navy was able to deal with most threats. But, as it turned out, the naval domination of “the maritime empire”, was also its Achilles’ heel, as it opened the gates of Constantinople to a terrible disease, which was incurable at the time.

The name of the «beast» responsible for the first major known pandemic in human history is Yersinia pestis. A small bacterium that first infected fleas, then spread among the rats that sailed the high seas on Byzantine ships. The infected fleas quickly jumped from rats to sailors and merchants, leading to an outbreak of Bubonic plague. The disease affected human lymph nodes, causing them to swell. This particular type of plague, which, during the usual one-week-long incubation period resembled the common flu, eventually caused fever, seizures and in severe cases – gangrene, making the carrier’s skin decompose, and killing them within days.

From the port of Constantinople, the disease made its way to other locations around the Mediterranean, including inland cities, where Justinian was shipping supplies and acquiring luxury goods. Quite quickly, his empire became the leading exporter of Bubonic plague, leading to a larger outbreak, which, according to some sources, might have killed from 25 to 50 million people.

Nevertheless, some historians argue that these numbers might have been overblown due to various reasons, including religious and political bias of those who originally recorded the casualties. A recent study published by the US National Academy of Sciences gives an example of such exaggerations, as one of the historic accounts claimed that as much as 99.9% of the population died as the result of the initial outbreak.

While Bubonic plague-ravaged cities and empires for centuries, the disease was quickly thwarted with the introduction of antibiotics in the 20th century. Even though it persists in some areas, including certain regions in Africa, the severity of modern Bubonic plague, compared to the Byzantine era is minimal, and the disease can be successfully treated in hospitals.

In one of the episodes of the TV series House MD, the main character, Dr. Gregory House comes across a rare modern case of Bubonic plague. He concludes that his patient got the disease from fleas that were sitting on her dog – which isn’t quite typical - and prescribes the woman a cocktail of antibiotic drugs.

Dr.House: Fill her up to the eyeballs with streptomycin sulfate, gentamicin, and tetracycline. Use a garden hose if you got one. Get yourselves some prophylactic treatments as well.

Patient: I’ve got the plague?

Most victims of the Plague of Justinian weren’t as lucky as the character saved by House, and the Eastern Roman empire, in general, suffered heavily, almost going bankrupt by the end of Justinian’s reign. The emperor himself contracted the disease but survived.

Throughout the centuries that followed, the plague returned several times in waves, affecting different locales, but further outbreaks occurring until the middle of the 8th century weren’t as powerful as the initial hit.

Even though it was the first major recorded epidemic caused by Yersinia pestis, similar strains from earlier periods have been found in the Tian Shan Mountains near the borders of China, Kyrgyzstan, and Kazakhstan. Scientists believe that from there the deadly bacteria, responsible for the near-destruction of the powerful maritime empire, might have started its journey towards the Mediterranean.