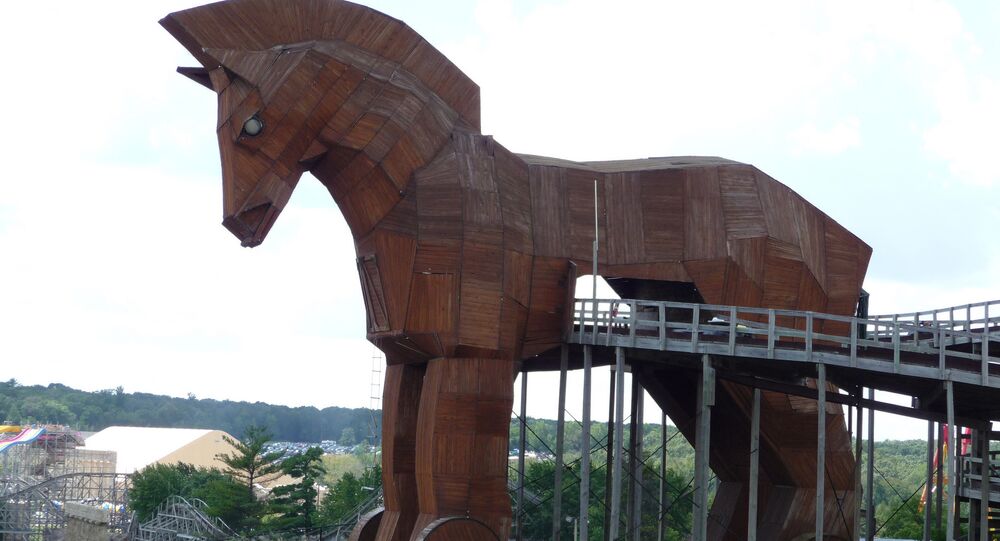 In modern language the term 'Trojan Horse' is an eponym for something or someone pretending to be something else in order to trick an adversary. It's most popular use is in computing — Trojan Horse programs, or simply Trojans, are seemingly benign software which infect victims' computers for some ulterior purpose.
As many of you know, the origin of the story lies in ancient Greece. According to the legend, during the Trojan War the Greeks built a giant wooden horse and gave it to the besieged city. The Trojans gladly accepted the symbolic prize for their perseverance (the emblem of their city was a horse) and wheeled the symbol of their victory inside. At night, a group of elite soldiers burst from inside the horse and opened the city gates from the inside, securing Troy's demise.

This incident is mentioned in the Odyssey, Homer's epic poem:

What a thing was this, too, which that mighty man wrought and endured in the carven horse, wherein all we chiefs of the Argives were sitting, bearing to the Trojans death and fate!…But come now, change thy theme, and sing of the building of the horse of wood, which Epeius made with Athena's help, the horse which once Odysseus led up into the citadel as a thing of guile, when he had filled it with the men who sacked Ilion.

Ilion is an archaic name for the legendary city of Troy, which is incidentally why Homer's other epic work is entitled The Iliad. But the Trojan Horse's greatest trick is perhaps that it may have never existed. In the book The Trojan War: A Very Short Introduction, Eric Cline writes:

Although a number of scholars have suggested that the Trojan Horse was actually a battering ram or some other machine of war, one theory in particular holds that the Trojan Horse was not a machine of war, but was instead a poetic metaphor for an earthquake. The reasoning is simple: Poseidon was the Greek god of earthquakes. Poseidon was usually represented by a horse (just as Athena was represented by an owl). The pounding of his horses' hooves not only created the crashing sound of the ocean's waves, according to the ancient Greeks, but also the sound that accompanies an earthquake. Therefore, the Trojan Horse was Homer's way of depicting the earthquake sent by Poseidon to level the walls of Troy.

This means that history's greatest feat of military deception was in reality either a direct assault or a cataclysmic event. And although one of the earliest acts of subterfuge may have been only a legend, its spiritual successors are well documented. For example, in the early fifteenth century the Welsh Tudors took Conwy Castle by surprise with a Trojan Horse maneuver. Two men pretended to be carpenters and gained entry to the castle to supposedly repair it. Instead, they killed the two watchmen and let the rest of their band inside, successfully capturing it.