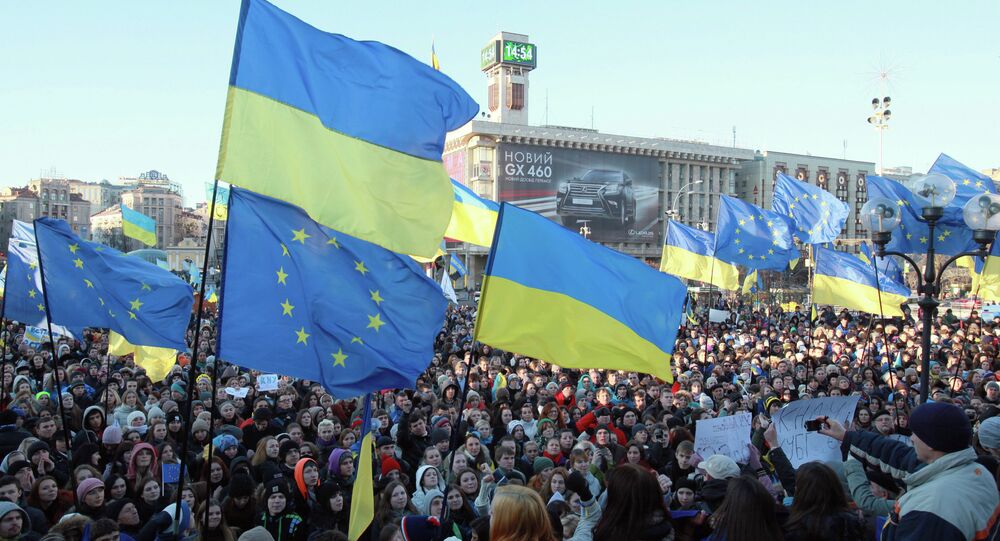 If we were to pick one country that made literally all the headlines in the outgoing year, it would be Ukraine. The so-called Ukrainian crisis proved the most dangerous conflict to hit Europe since the war in former Yugoslavia.

The Ukrainian crisis actually broke out in late 2013, but in 2014 the events took such an unexpected and dramatic turn that it is worth looking back at how it all started. The bone of contention that triggered mass protests in Kiev, also known as Euromaidan, was the postponement of the signing of an association agreement with the EU. The deal implied closer trade ties with Europe as opposed to joining the Customs Union with Russia, another option under discussion at the time.

In early December some 800,000 protesters occupied Kiev city hall and Independence Square. On February 22 the raging crowds stormed administration buildings and a de facto coup d’état took place. The Parliament voted to oust the president and set early elections to be held in May. Hitherto the country became divided into those who supported the coup and people who refused to recognize the West-backed interim government that came to power following the unrest, says Robert Oulds, Director of the Bruges Group, an independent all-party think tank.

“Ukraine was a unitary state until, of course, the West supported the overthrow of President Yanukovych. He was someone who wanted to have a balanced position between the EU and Russia. He wanted to have a trade agreement with both entities. That was not accepted by the EU, by NATO and the West. He was then removed from power. And, of course, Ukraine is a divided society. Some people did not want to be in the association agreement with the EU, they wanted to look towards Russia, they wanted to have a balanced relationship. That was not tolerated. So, it was inevitable that this crisis would have come about, if the regime change is enacted,” Robert Oulds said.

One of the first steps taken by Kiev’s new authorities was banning Russian as the second official language, which sparked mass protests in Russian-speaking regions in the southeast of Ukraine. In mid-March an autonomous republic of Crimea held a referendum, where the overwhelming majority of the population voted for secession from Ukraine and reunification with Russia. In April another two major regions, Donetsk and Luhansk, called for a referendum on independence. In response, Ukraine’s then-acting president Olexander Turchynov announced the start of a so-called anti-terrorist operation against the self-defense forces of the rebellious regions. Months of violent clashes with daily shelling and hundreds of civilian deaths followed.

On May 11, amid ongoing military actions independence referendums were held and the creation of the Donetsk People's Republic and Luhansk People's Republic was proclaimed. Two weeks later Petro Poroshenko was elected Ukraine’s new president. Already in June he signed the first part of an association agreement with the EU. Yet he was not so quick in stopping the bloodshed in the country. Only in September, representatives of Kiev and self-defense forces met in the Belarus capital of Minsk and signed a ceasefire agreement mediated by the OSCE and Russia. Despite the truce, the war continued. In October Human Rights Watch unveiled evidence that Ukraine attacked populated areas of Donetsk with cluster bombs, banned by many countries. The humanitarian situation in the southeast of Ukraine rapidly deteriorated. Over 800 thousand refugees have fled to Russia since the conflict started. Critical infrastructure in the Donetsk and Luhansk regions was heavily damaged by  Ukrainian airstrikes. Kirill Koktysh, a political analyst at MGIMO University, explains why Kiev did not follow the Minsk agreements.

“When you are not able to get a victory with the help of usual military tools, a humanitarian catastrophe could be one of the additional tools. Putting people into a nightmare when they are lacking of food, lacking electricity, lacking water, in this nightmare giving up can be considered a way out. So, this could be one of the strategies and an argument of how to persuade the southeast to live along with Kiev under the conditions of Kiev,” Kirill Koktysh said.

However, under increasing international pressure in early December Poroshenko announced a "silence regime." By that time the number of civilian deaths in the war-torn territories reached 4700 people, according to the UN. So far both sides have maintained the ceasefire. Graham Phillips, a British journalist, based in Donetsk, says after months of fear and despair the local population finally has hope for real peace.

“It is one thing to have EuroMaidan – a violent revolution which broke up a country. But what happened here began as a protest, it began as a storm, there were takeovers of buildings. And it was determined, but the aims and the aspirations were peaceful. And that’s really what the people want here – simply peace. People want to live their lives. People want to restore, to rebuild. People want to have some sense of looking into the future with hope,” Graham Phillips said.

In just one year Ukraine went through a regime change, civil war, political and economic crisis. What started as a regional conflict soon evolved into one of the biggest challenges for European security of the 21st century.