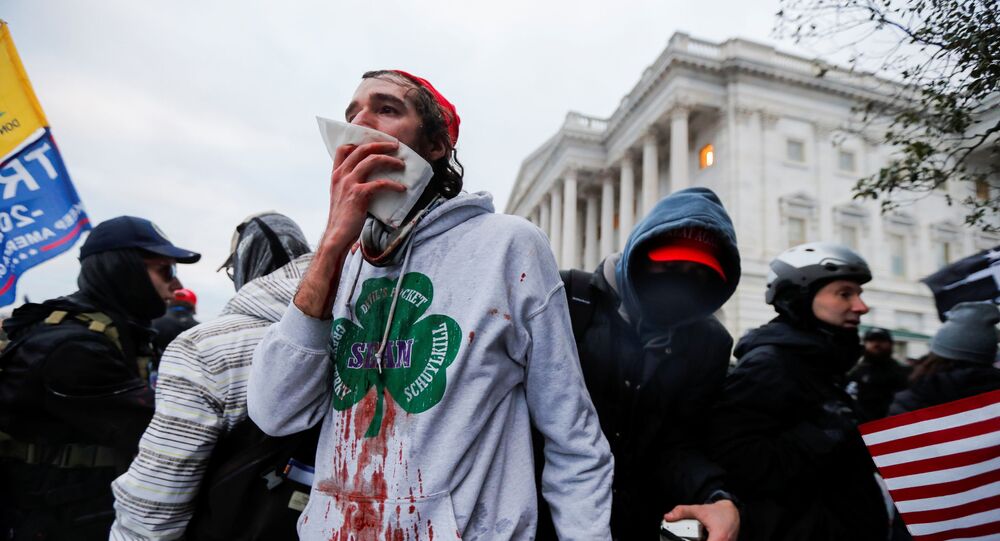 Many commentators are dismissing the extraordinary events at the US Capitol as something much less serious than an attempted coup. Some have even joked about it as if it were a carnival of crazies high on Trumpism.

Five people died on January 6 when thousands of Trump supporters forced their way into the seat of US government. That’s hardly a picnic gone awry.

And let’s be clear, the seizure of the Congressional buildings came right after President Trump fired up an angry crowd to march down Pennsylvania Avenue in order to “save American democracy”… because “you can’t win by being weak”.

Perhaps many among the crowd swarming the Capitol had no malign ambitions against lawmakers inside who were at that time certifying the election of President-elect Joe Biden. However, there is no doubt it was Trump and his most ardent supporters’ intention to overturn the electoral process. Overthrowing the political process is getting close to a definition of coup.

It is also clear that among the invading throngs were members of Neo-fascist militia who were armed and carrying zip ties. That suggests there were plans to kidnap people within the Congressional building and forcibly detain them.

Carrying nooses and shouting, “Hang Mike Pence, Hang Mike Pence,” is also something that puts a more sinister twist on the events. Only hours before Trump and his cronies called for marching on the Capitol, the president had fingered Vice President Pence as “weak” and a traitor after it emerged he would not do Trump’s bidding in sabotaging the Congressional certification of votes for Biden.

Similar vitriol was expressed by the crowd towards Democrat leaders Nancy Pelosi and Chuck Schumer. If the mob had been able to apprehend any of those politicians, the events would likely have ended up with a lot more blood on hands.

After several hours of besieging the Congress, Trump reluctantly told his supporters to go home peacefully. The National Guard had arrived and escorted the protesters from the building in a strange atmosphere of calm; strange considering the extraordinary breach of public order that had just occurred.

There is a suspicion of some level of collusion with the state security agencies and the Trump mob. There had been no threat warning issued by the FBI before the event. The seat of government on a momentous day was oddly under-protected even though there were ample notices across social media of a major rally by Neo-fascist militia groups. There are also reports of Pentagon chiefs standing down the National Guard prior to January 6. The slow response to take back control of the Capitol is further disturbing.

And don’t think that’s the end of the affair. The same far-right militia involved in seizing the Capitol are subsequently warning through their media networks that they will return on January 20, the day Joe Biden is inaugurated – this time heavily armed.

Groups like Bugaloo Bois and Proud Boys are calling that date “Round 2”.

Another group, Cowboys for Trump, is warning, “there will blood flowing from that building”.

Even more ominously, these groups have even taken to denouncing Trump after he appeared to baulk at the January 6 seizure of the Capitol.

Yes, indeed, there was a certain farcical rag-tag element to the crowds that took over the Congressional buildings this week. Who can forget the QAnon “shaman” guy wearing the buffalo headdress? There were also other amusing aspects like protesters taking selfies and milling around as if on a badly-organized public tour.

But dismiss the political situation in the US right now at your peril. There are millions of Americans who truly believe – thanks in part to Trump’s incessant, delusional lying, and also to rightwing media echo chambers – that their democratic rights have been violated by an elite cabal or “deep state”. That’s not to deny the existence of a “deep state”. There certainly are unelected forces at work in the US which decide who is allowed to become president and who is not.

The fact of millions of heavily armed and trained militia who are convinced they are in an existential struggle to “save American democracy” is a real and present danger. The events on January 6 are perhaps best described as an “unfinished coup”. It has emboldened further daring. The perceived sell-out by Trump only adds enragement.

If things get out of hand on January 20, then we will see the deep state mobilizing. And then, in that case, fascism will have come to the US in the name of “anti-fascism”.

America is on a dangerous slippery slope.