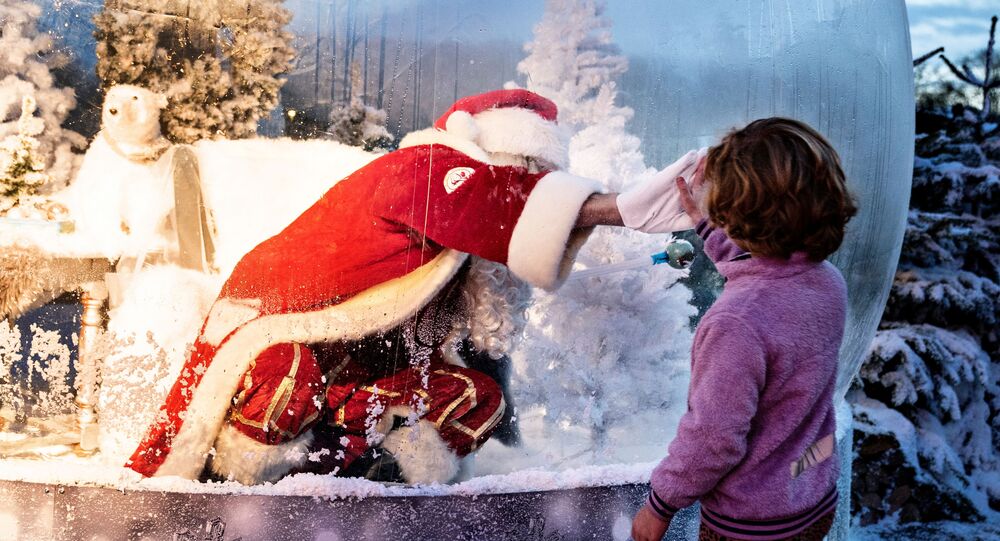 Christmas festivities, even in the pandemic, are a chance to reconnect with family, friends, and loved ones in what is often a magical and special time of the year. However, it’s also a notoriously busy period for hospital emergency departments, faced with a raft of accidents and injuries exclusive to the winter break.

We spoke to Professor Adam Taylor, director of the Clinical Anatomy Learning Centre at Lancaster University, about some of the common and strangest Christmas calamities on record.

Sputnik: What are some of the most common injuries sustained at Christmas?

Adam: Well, as we know, the festive period is one where sometimes we overindulge in and perhaps let our guard down. Even in the run-up to Christmas, simple things such as papercuts from wrapping presents can be particularly common. Injuries to things like the eyes, people putting up tinsel and managing to scratch their cornea with bits of tinsel, is not uncommon. Similarly, pulling out their Christmas tree branches and kind of feathering them to get the shape of the tree, particularly with an artificial tree, sees people poked in the eyes with Christmas tree branches, etc. And one that's particularly common but not reported all that often is people who have allergies to Christmas trees in particular. So, we've got those kinds of penetrating and scratching injuries but also you know, sadly one of the most significant ones are fires related to people's electrical equipment. So, the common one is decorative lights going up, fires are particularly common associated with those, but there are some countries particularly in parts of Europe where instead of using artificial lights such as that we find are commonplace in UK homes, for example, they use actual candles on their Christmas trees. Sadly, those fires are particularly unpleasant and sadly people have died and met various significant injuries from them. Lights are a particular challenge and then wrapping paper again you know, people trying to throw it on an open fire. Christmas is all about open fires, and warmth, and people burning wrapping paper sometimes it can cause flash fires and spit out of the fire and sadly burn people. So, you know, burn injuries, scratching and trauma injuries are not uncommon at this time of year, and then people falling off ladders; putting the star on the top of the Christmas tree indoors, or climbing up to hang lights from the gutters. The ladders either giveaway or sadly they slip. They are probably the most significant injuries that we see at this time of year.

Sputnik: It seems that a lot of the injuries that occur during Christmas happen in the home environment or at least on land. Is this always the case? Do we see strange festive accidents in perhaps more unusual settings as well?

Adam: Yeah, so we've just spoken about some of the home ones but the one that people always forget about is if we're lucky enough to get snow at Christmas, you know, accidents associated with sledding, tobogganing, call it whatever you want; snowball, snowball fights - they're all outside the home environment. And it's going to be particularly different this year because of the circumstances that the world finds itself in but injuries outside the home associated with Christmas parties, usually account for a number of A&E visits, and I'll leave that to your imagination to think about the kind of things that may result in people at Christmas parties presenting to A&E. But if you think about some of the more kind of strange festive accidents, we're in the Northern Hemisphere. We're cold and usually wet but sometimes dry and snowy, but down under it's summer in places like Australia and therefore, people often get injuries that are associated with things like jet skis, boat propellers, falling off boats, you know, they're out there celebrating their Christmas in a slightly different way and therefore we do see some, what we might consider to be more exotic festive accidents in the southern hemisphere this time of year.

Sputnik: What are some of the most notable accidents that happen this time of year? What's the cream of the crop?

Adam: I suppose favourites is probably the wrong word to use but I've got some particularly notable ones. There are reports, these are all in the published scientific literature, a gentleman in his 30s putting up Christmas decorations and when he looked up to assess where he was up to, sneezed and that accidentally resulted in him inhaling a drawing pin, which is never good at the best of times. And then there are reports of children at this time of year, [who] account for about 25% of injuries, anything from standing on baubles to tripping over decorations and presents. But the one that stands out from the published literature is a poor four-year-old girl who was so excited about Christmas, she presented to accident and emergency, with one of those little Christmas bells in her ear. When she was asked about it, she said actually, the reason it was in her ear was because she was actually trying to listen to Jingle Bells with this bell in her ear. There are particularly unpleasant descriptions of trauma from various people standing high on chairs, hanging decorations and sorting out tree branches; slipping and coming crashing down, and landing with tree branches in bits of their bodies that they probably wouldn't want them to be, both men and women resulting in kind of penetrating trauma, shall we say, to bits that we land on when we fall down. And then people dropping things. So, you know, people dropping these huge Christmas decorations, breaking their toes, breaking their feet, breaking their ankles. There's a variety of shall we say bizarre incidents, but you know, the one with the little girl trying to listen to Jingle Bells with the metal bell in her ear is a particularly notable one this time of year.