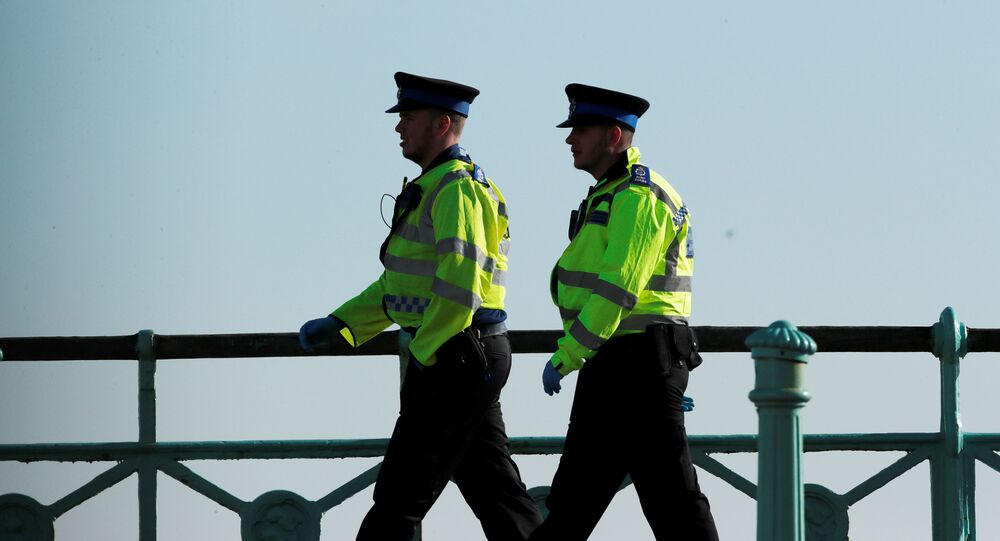 Irish academic research has shown that Vitamin D, which we get from sunlight, can boost resistance to respiratory infection, including coronavirus, yet the UK government isn't listening and instead warns us all to stay indoors.

Summer seems to have arrived early in Britain. It’s  forecast to be 24 degrees Celsius on Saturday in some parts, with lovely sunny weather and warm temperatures returning in the second half of next week.

Not that most Brits will be able to enjoy it. We're in 'lockdown' and only supposed to go outdoors for a very small number of reasons. Sunbathing, as the police and government have both made very clear, is not one of them. A video was doing the rounds on Sunday showing cops in a patrol van telling people not to sunbathe in Peckham Rye Park in London.

A police van is going around peckham rye blaring “no sunbathing... exercise only” pic.twitter.com/cQw92CtNxv

​Of course, gatherings of more than two people need to be dispersed. But even someone sunbathing on their own, properly socially distanced from the next person, could end up getting into trouble. This is nonsensical. So long as social distancing rules are observed,  sunbathing can actually do us a lot of good in our current situation.

The stronger our immune systems, the better our protection against the coronavirus. Vitamin D is crucial as the Irish research, from Trinity College Dublin, shows. At the end of a long winter our Vitamin D levels are usually very depleted- meaning of course we are more likely to be susceptible to infections.

Dr Eamon Laird, co-author of the report, says: ‘‘These findings show our older adults have high levels of vitamin D deficiency which could have a significant negative impact on their immune response to infection. There is an even larger risk now of deficiency with those cocooning or confined indoors.'

There hasn't to my knowledge been a study this year in the UK on the same subject, but it's reasonable to assume that with similar weather to Ireland,  British citizens, at the end of a gloomy, mild and very wet winter will have the same deficiencies.

Sunlight can remedy that.  As the report's summary says:  'Vitamin D is produced in the skin by exposing the body to just 10-15 minutes per day of sun.' Not only that, sunlight increases the brain's release of the hormone serotonin, making it a natural anti-depressant.  Vast amounts are spent on anti-depressant drugs, but the best medicine for this condition is out there, available for free, in front of our eyes.

No one is talking here about denying the need for social distancing to mitigate Covid19's spread, but surely, given the clear benefits of sunshine in improving physical and mental health, the UK government ought to taking be a more nuanced approach?

Instead of introducing staggered time slots for different ages to go to them, parks and open spaces are being closed. A lot of Brits who don't have a garden, are going to be spending the next seven days cooped up inside, when- provided they keep their distance- it would be better for their health if they spent some time soaking up some sun-rays.  Rather than take on board the Irish research, the UK government seems to be going in the other direction. On Sunday Health Secretary Matt Hancock warned that exercise out of the home 'could be banned'- meaning we wouldn't even be able to go out for a bike ride up and down the road.  Yes, the Chopper could be in for the chop.

How extraordinary would that be when one considers that flights from Covid-19 hotspots have been coming in to the country unchecked! Professor Neil Ferguson of ICL has said that Covid-19 has been 'seeded' around the UK  by people arriving into the country by plane. You could say that was ‘stating the bleedin' obvious’ , but according to reports the Chief Medical Officer Professor Chris Whitty thought there was no evidence banning flights would stop the spread of a global pandemic ... that has been spread by people travelling from one country to another!

The failure to close our airports- and introduce proper quarantine measures at all ports of entry- is likely to cost thousands of lives.  Yet it's sunbathing on your own that is deemed a bigger problem.

The UK government's policy can be likened to a householder who faced with a flood, turns the kitchen tap off but leaves the one in the bathroom  running.  The sensible thing to do of course is to turn off the stopcock so no more water can come in. But  throughout the crisis Johnson's crew have been anything but sensible.  The flip-flopping has been  extraordinary.

On 5th March, Boris Johnson said on television: 'People can see the country is going to get through this in good shape'.  The Daily Express reported that 'He (Johnson) repeated his insistence that he will not give up shaking hands because of the outbreak. He shook hands with presenters on arriving on the set and later did the same thing with Maltese President George Vella'. The PM, the Express said, emphasised that the risks from the virus were small- and that measures such as closing schools and cancelling sports events and other big public gatherings were unlikely.

Yet just a week later, on 12th March, Johnson was warning that Coronavirus was the 'worst public health crisis for a generation' and declared: 'I must level with you- many more families are going to lose loved ones before their time'.

We went from Bouncing Boris to Grim Reaper Boris in just seven days.

But there were still no restrictions on movement announced until Monday 23rd March, which was much too late. Even then, as mentioned earlier, the flights from hotspots still were allowed to come in unchecked. On 27th March, the man who wouldn't stop shaking hands announced that he had tested positive for the virus.  Quelle surprise, you might say. (Boris Johnson is currently spending his fifth day in hospital and of course one wishes him well).

While there have been plenty of warnings to 'stay at home' to protect the NHS, what we haven't received yet is any practical information from government on how to build up our immune systems to make us less susceptible to infection. For all the six figure salaried officals at Public Health England today, it seems we got better advice back in the 1940s.  Anyone remember Lord Woolton and the Ministry of Food?

Cod liver oil- a rich source of Vitamins A and D, was given free to children, pregnant mums and nurses in the 1940s and 50s,  but to my knowledge not one UK government minister or public health official has talked of its benefits in  recent weeks, or even mentioned the words 'Immune Boosting Vitamins' or 'Immune Boosting Food'.

The official line has gone from a  glib 'you've nothing to worry about, carrying on going out and about and to large events and shaking hands' to 'this is the worst public health crisis for a generation, many families will lose loved ones before their time', with nothing much in between.  By not stopping people 'seeding' the virus from incoming flights, it's clear that the government, for all its draconian talk about enforcing a 'lockdown' hasn't abandoned 'herd immunity'. The most plausible explanation I've seen of the seemingly contradictory  policy, came from  Julian Symes  on Twitter who described it as 'Herd Immunity accelerate/break'.

​ The government wants the virus to spread as quickly as possible, but subject to the NHS's ability to cope.  So flights can still come in unchecked, but we have distancing measures too. That can also explain why they haven't been extolling the benefits of Vitamin D- or working out a scheme which combines the maintenance of distancing measures with an acknowledgement of the  health-boosting effect of sunshine.

When one factors in the failure to plan or prepare in any meaningful way for the pandemic, which means that some NHS staff are going into front-line battle with just bin bags for protection, then we can say that the government's handling of the Coronavirus crisis has been 'Fail' an epic way.  So it's no surprise that they'd rather blame us- the public -for simply wanting to do what comes naturally at the end of a long winter.