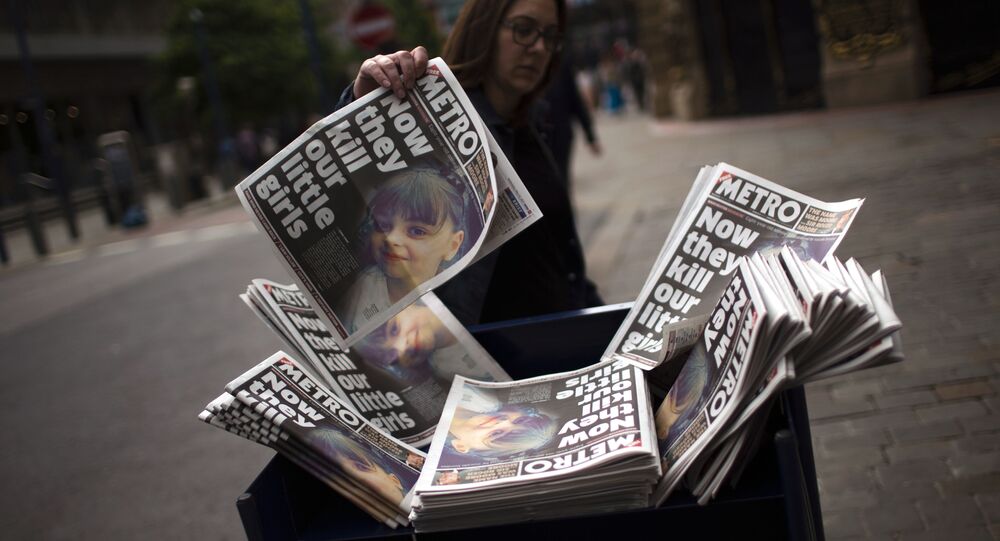 There are reports that Salman Abedi, the Manchester suicide bomber, returned from "Daesh stronghold" Libya just days before he carried out his horrific attack.

The question we need to be asking is: who turned Libya — which as recently as July 2010 was being lauded in the British press as one of the top six cruise ship holiday destinations — into an "Daesh stronghold" — and a training ground for terrorists like Abedi?

It's not a question that the West's political elites and their media stenographers want us to be asking. And that's hardly surprising. Because it was they — and the military alliance they support, who transformed Libya from a modern progressive country which acted as a bulwark against Salafi-jihadism, into a haven for al-Qaeda and other terrorist groups.

Let's cast our minds back to March 2011. NATO's "liberation" of Libya during the so-called "Arab Spring" was cheered on by "liberal interventionists," regime-change obsessed neocons and most of the mainstream media. The "evil" Gaddafi was going to carry out a "Srebrenica style" massacre of civilians in Benghazi, the likes of David Cameron and William Hague told us. We simply had to intervene to stop the dictator "killing his own people."

Gaddafi's warnings that many of the so-called "rebels" were actually fanatical extremists linked to al-Qaeda were haughtily dismissed by the West's endless war lobby as the ravings of a madman. But — as I later wrote:

"It wasn't the 'mad' Gaddafi who was telling lies in 2011, but the regime changers in suits."

At home, those of us who warned that forcibly ousting the long-standing Libyan leader would greatly strengthen al-Qaeda — and give them and affiliated extremists a base on the Mediterranean — were shouted down as "apologists for dictators'"by the Euston Manifesto brigade.

When I wrote a comment piece for the Daily Express newspaper on July 27, 2011, calling for UK to end its involvement in the Libyan war, my obsessed neocon stalker Oliver Kamm of the London Times newspaper attacked me the same day for saying that Gaddafi had given Libya stability and higher living standards.

@OliverKamm he was right and you are wrong. No change there then.

But I — and others who opposed the NATO action — were right and the serial "regime changers" were wrong — once again.

Libya is now a failed state. The country which had the highest Human Development Index in Africa in 2009, has seen the return of slave markets.

Stability? In place of Gaddafi there's utter chaos. There is no unitary government authority — in fact, there's competing governments. The main beneficiaries of the NATO "intervention" have been Daesh and al-Qaeda, who established a presence in the country that they never had before.

"Libya today is a bewildering chaos of competing militias and jihadi groups broadly following IS, al Qaeda and affiliates such as Ansar al-Sharia, and the Muslim Brotherhood in several guises and shadowy forms" writes Robert Fox in the Standard. Yet just seven years ago, before NATO got going, it was a perfectly safe place for Western tourists to visit.

The instability in Libya has spilled over into neighboring Tunisia — with deadly consequences for western tourists. In June 2015, 38 people — including 30 Britons, were massacred on the beach at Port El Kantaoui. The gunman, Seifeddine Rezgui, was reported to have trained at a Daesh base in Libya. A base that — it must be pointed out — did not exist when Muammar Gaddafi was running the country.

@IanJSinclair @mark_markat So Cameron learned NOTHING from the mistakes in Iraq. Our democracy allowed him to destroy Libya, so WE are all guilty of electing idiots.

While the consequences of NATO's Libya intervention have been so catastrophic, and so far-reaching, those responsible have never been held to account. Quite the opposite — those who helped turned the country into a jihadists playground and in doing so greatly increased the terror threat to Europeans — are positively thriving.

The politicians who ordered the bombing of Libya are raking it in on the conference circuit. Earlier this year it was revealed that David Cameron, British Prime Minister in 2011, was paid a mind-boggling £100,000 (US$130,000) for one speech to Morgan Stanley Investment Management.

This is after a damning report of the Foreign Affairs Committee of the House of Commons which declared: "the proposition that Muammar Gaddafi would have ordered the massacre of civilians in Benghazi was not supported by the available evidence." Like Iraq, Libya was a war sold to us on a lie.

Yet even after the destruction of Libya, the deceit goes on.

The same bunch of warmongers who voted for and cheer-led the military action to topple Gaddafi are hell-bent on toppling another secular Arab leader who's fighting the very same people who have claimed responsibility for and celebrated the horrific bomb attack in Manchester.

The serial regime changers want Bashar al-Assad's head on a plate, so they can then move on to Iran. Again, the main beneficiaries of this policy will be Daesh and al-Qaeda. It's worth nothing that British Prime Minister Theresa May not only voted for the invasion of Iraq in 2003, but also for the bombing of Libya in 2011 — and for Syrian government forces to be bombed in 2013.

Had David Cameron got his way then, its quite probable that Salman Abedi's co-ideologists would be in control of all of Syria today.

At the time of writing, there's also reports that Abedi himself may have been in Syria too. Once again, he'd be on the same side of the neocons — ie. working for "regime change."

The unpalatable truth is that very people who claim to be making us safe, have in fact greatly increased the terror risk to ordinary citizens on account of their criminally reckless regime change operations against governments that acted as a bulwark against the jihadists. And unless we have a proper grown up, no-holds barred debate on Western foreign policy double standards, and ask who it was who turned Libya from a top cruise ship destination which was getting praise in the Daily Telegraph, into a "Daesh stronghold," the nightmare will only continue.