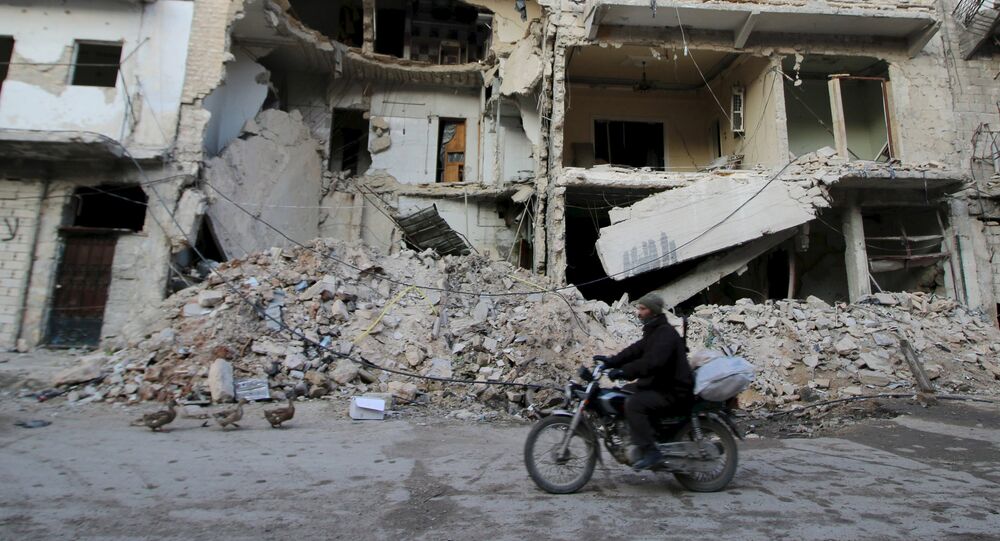 If they carry through on their threats, Saudi Arabia and Turkey will not do so in the manner that many expect, nor for the reasons that are commonly discussed.

© AFP 2020 / MUSTAFA OZER
Saudi Intervention in Syria Would Have Disastrous Consequences
Saudi Arabia sent tongues wagging with its latest threat to dispatch ground troops to fight against Daesh alongside the US. This comes on the heels of the Russian military declaring that Turkey appears ready to invade Syria.

The reaction that some commentators have had to both of these news developments has been to either totally ridicule them as impossible or to conjure up fearful images of a large World War II-style invasion force just waiting to stream into the country.

Both extremes inaccurately portray the reality of the situation and demonstrate an unawareness of the post-conflict strategic vision that Saudi Arabia and Turkey want to advance.

There’s a strong degree of psychological warfare at play here, both in convincing these states’ allies and attempting to deter their adversaries, but it mustn’t be forgotten that there are practical ways in which they may try to reach their objectives short of the full-scale invasion that some are fretting about.

The end game for both actors is to shape the battlespace to the point where they can later pressure Damascus in acceding to an autonomous or federalist “solution”, which would thereby allow them to herald in the strategic establishment of a transnational sub-state “Sunnistan” with Iraq and revive their grand plans for a Qatari-Turkish gas pipeline to Europe.

The knee-jerk reaction of most commentators has been to label a Turkish-Saudi invasion as impossible, understanding that it would be met with immediate Russian airpower and thereby neutralized.

The common conception is that neither Erodgan nor Salman and his handlers are keen to commit military suicide, and that the US wants to avoid World War III against Russia and won’t contribute to a further escalation.

© AFP 2020 / OZAN KOSE
Turkey's Invasion of Syria? Moscow Keeping an Eye on Ankara's Moves
All of this is absolutely true, but conflating these justified presuppositions with a conventional invasion misses the critical point that Riyadh and Ankara can pursue their objectives using unconventional (special forces) means and avoid the dramatic scenarios that many voices are liberally throwing around nowadays.

Here’s what each of them could most realistically do short of a full-fledged and cataclysmic engagement:

Erdogan wants to create a “safe zone” in northern Syria in which Turkey can directly embed its influence, train more terrorist proxies, and utilize as a forward operating base for future attacks within the country.

© AP Photo / Alexander Kots
Turkey Planning Military Invasion in Syria - Russian Defense Ministry
It’s unlikely that he’ll be able to secure Washington’s support for a conventional invasion because the US does not want to predictably end up going to blows against Russia on Turkey’s behalf, but if such an act of aggression does in fact take place, it’s very probable that the US purposefully misled Erdogan because it wants to see Moscow take him out.

The author wrote about the strategic underpinnings of this Machiavellian strategy back in November for an online journal article entitled “Why’s The US Hanging Turkey Out To Dry?” and strongly recommends that interested readers check it out for further background context.

If Turkey does in fact invade Syria, then it’ll likely just be an escalation of the unconventional aggression that it’s been waging against its neighbor for five years now.

This would allow it to sidestep a direct confrontation with Russia (which the US wants no part of) while inserting a number of special forces and non-uniformed soldiers in a despairing attempt to hold on to the little bit of on-the-ground influence that its proxies still have left at this point.

They’ll obviously be targeted by Russia airpower, but the crafty intermingling of US special forces or military advisors into this invading mix (revealed to Moscow via diplomatic back channels and/or manufactured media “leaks”) could present a serious dilemma in dealing with the aggressors and further complicate an already complex situation.

Riyadh is not expected to divert any of its military forces that are partaking in the failed War on Yemen to the prospective Invasion of Syria, but it could muster up some of its reserve units and elements of the National Guard for this purpose.

© AFP 2020 / Saleh Al-Obeidi
Fighting Daesh, Huh? Saudis Want to Send Troops to Syria to 'Support' Terrorists
Nevertheless, the transfer of significant numbers of these troops to southern Turkey could be monitored by Russian intelligence and would logically indicate that an attack is possibly imminent, so in the interests of retaining a degree of strategic surprise, the Saudis probably won’t contribute to any operations until after they’re already underway.

Even then, they’ll likely send a hodgepodge assortment of reserve units, special forces, and National Guardsmen. The faint possibility exists for a “shock and awe” invasion of Iraq’s Anbar Province carried out by the Saudis, their “anti-terrorist” coalition, allied Sunni tribesmen, and American special forces and then continuing all the way up to Raqqa, but the preparatory groundwork for this would be easily observable and would probably have been spotted by now.

While it may figuratively be a pipedream for Turkey and Saudi Arabia to alter the Syrian battlespace to the point of enforcing their preferred post-conflict “solution” on the country, it doesn’t remove the actual pipeline motivations for why they would both want to do so in the first place.

Using Ralph Peter’s 2006 “Blood Borders” article as a strategic foundation, the author and his colleagues published a mid-October analytical forecast entitled “The Race For Raqqa And America’s Geopolitical Revenge In ‘Syraq’”, where it’s argued that Riyadh and Ankara would like to create a transnational sub-state “Sunnistan” along the Syrian and Iraqi frontier in order to facilitate the construction of a Qatari gas pipeline to Europe (which was one of the original causes for the War on Syria).

Importantly, this article came out over a full month before former US Ambassador to the UN John Bolton espoused such a strategic goal (albeit for different disguised reasons) in a late-November op-ed for The New York Times.

© AP Photo / Hassan Ammar
View From Iran: Saudis 'Will Not Dare' to Send Ground Troops to Syria
In terms of the scheme’s overall feasibility, Saudi Arabia and Turkey would have to change the battlefield conditions to the point where they and/or their proxies are in control of the broad diagonal swath of territory all the way from Iraq’s Anbar Province to Syria’s Azaz-Jarabulus Corridor, hence the talk of a conventional military invasion aimed at critically securing the latter.

Without the Corridor under their control, it’s impossible for the pipeline to be built because Ankara would never trust for it to be built in the Kurdish areas of Iraq, Syria, and especially the revolting southeastern part of its own territory.

The next prerequisite is for the anti-Syrian coalition to prevent Damascus from reasserting its sovereignty over the Daesh-controlled regions of the country, and this could be achieved by the US and its proxies beating the Syrian Arab Army in the “Race for Raqqa” and liberating the terrorist ‘capital’ before they do.

The newfound situational and normative advantage that this would entail could allow them to convincingly push for an autonomous or federalized “solution” in Geneva, and if done concurrently with a similar political process in Iraq, then this could establish the de-facto independent “Syraqi Sunnistan” entity that would then approve the pipeline’s construction through its territory.

More dangerously, however, is that this geopolitical Frankenstein could “invite” a unilateral “peacekeeping” force comprised of its Western and Arab patrons in order to prevent Damascus and Baghdad from stopping the project.

While entirely illegal, if both host states’ central governments are too weakened by the autonomist/federalist “solutions” imposed on them, they may be powerless to stop it, and a joint NATO-Saudi “anti-terrorist” coalition occupation could quickly be launched.

© AFP 2020 / FAYEZ NURELDINE
US Welcomes Saudi Arabia’s Commitment to Fight Against Daesh
Riyadh and its allies would provide the “Arab and Muslim legitimacy”, while the EU would support the endeavor due to the American-manufactured myth that this will help stop and reverse the hitherto overwhelming and utterly destabilizing “refugee”/economic migrant flows.

The US, for its part, wants to build a bastion of influence in the central geostrategic space between Turkey, Syria, Iraq, and Saudi Arabia, but in order for its power-hungry plans to spring into action, Erdogan first needs to invade the Azaz-Jarabulus Corridor and succeed in his near-impossible and likely suicidal task of stopping the Syrian-Russian liberation counter-offensive in Aleppo.

View From Iran: Saudis 'Will Not Dare' to Send Ground Troops to Syria