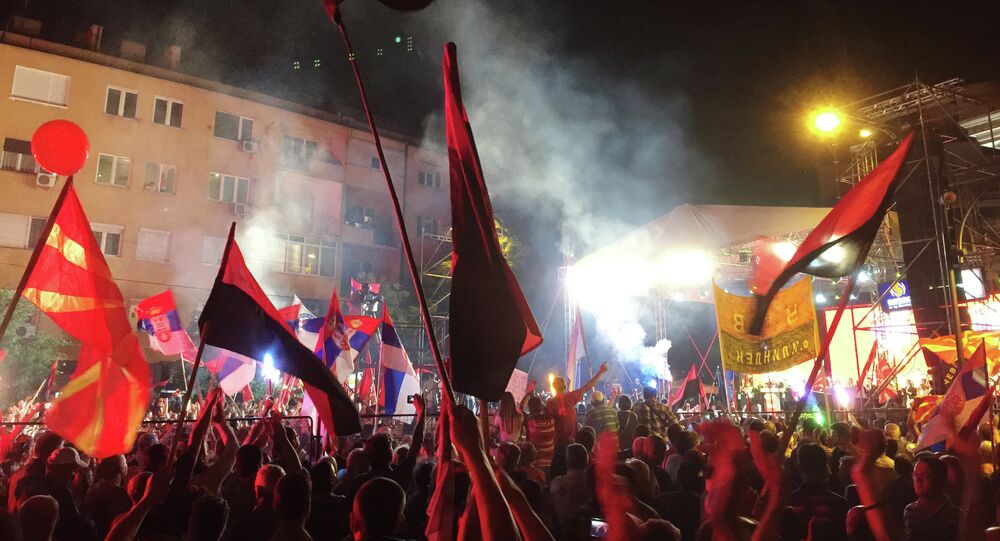 Bulgaria’s decision to send troops to the Macedonian border raises disturbing questions about its true intentions over the country that it last occupied as recently as World War II.

Bulgaria announced the decision to reinforce its border with Macedonia last week in the aftermath of the Kumanovo terrorist attack, publicly stating that it has to defend itself from possible terrorist infiltration (no matter that Eastern Macedonia has never in its history experienced this problem before) and prepare for the (unlikely) possibility that the 90,000 Bulgarian passport-holders in the country could flee across the border.

© REUTERS / Ognen Teofilovski
Bulgaria Sends Troops to Border With Macedonia Amid Deadly Clashes
Suspicions about Bulgaria’s intentions were raised from the get-go, but now other developments and statements coming from the country appear to confirm what’s really behind their seemingly mystifying move.

Bulgaria, implicitly supported by the US and EU, is possibly attempting to reassert its de-facto claims over the territory and people of the Republic of Macedonia as a means of further destabilizing the country, sidelining Russia’s Balkan Stream project, and distracting from its own domestic malaise.

The sending of more troops to the Bulgarian-Macedonian border didn’t occur in a vacuum, as certain domestic forces have been pressing for Sofia to involve itself in its neighbor’s domestic and sovereign affairs. Take for example the Director of the National History Museum, Bozhidar Dimitrov, who provocatively hinted that Bulgaria might be confronted with the choice to re-annex its former Fascist-era conquest if asked to do so by the country’s dual Bulgarian citizens.

It should be noted that his call was made half a week prior to the buildup of Bulgaria’s military presence along the Macedonian border, so it’s feasible that this influential and well-connected academic and cultural personality may have had an impact on that decision.

Additionally, Dimitrov is widely known for his radical anti-Macedonian views, having even gone as far as publishing a book in which he asserts that his country’s internationally recognized neighbor is really part of Greater Bulgaria and that there’s no such thing as Macedonia, Macedonians, or the Macedonian language.

Concern about Bulgaria’s influence over Macedonia’s domestic crisis hit an alarm bell on Sunday when former Bulgarian Prime Minister and current President of the Party of European Socialists Sergey Stanishev attended the Color Revolution inauguration and revved up the anti-government crowd by speaking in both English and Bulgarian.

During his speech, he neglected to even mention the word “Macedonians”, thereby committing a common racial slight by Bulgarians who refuse to recognize the existence of the ethnicity.  It was all the more startling, however, that he had the gall to do so center-stage as a distinguished guest of the Color Revolutionary ‘opposition’, showing that neither he nor his hosts have the slightest care about the issue that forms the core of the country’s identity.

Finally, it’s also telling that it was Bulgarian Foreign Minister Daniel Mitov who was chosen as the individual to announce the EU’s plans in crafting a unified approach to the Macedonian Crisis. This indicates that Brussels has made a conscientious decision to capitalize off of Bulgaria’s historically nationalist attitude to Macedonia in crowning it as the West’s Lead From Behind proxy.

© AP Photo
People Power or Western Meddling? Macedonia Unrest Reveals Differing Views
Such a designation will likely only embolden Bulgaria and the nationalist forces active in its government and society; a calculated move that now increases pressure on Macedonia from the country’s previously calm and stable eastern border, which, when combined with the pressure coming from Albania, creates a type of political pincer movement against the democratically elected and legitimate government.

Bulgaria has historically attempted to physically dominate Macedonia and erase any reference to the Macedonian ethnic group, and it’s tried doing so three times in the last century:

Less than one month after the Balkan League of Montenegro, Serbia, Bulgaria, and Greece liberated the vast majority of the peninsula from Ottoman control, Bulgaria betrayed its allies and tried to conquer their newly acquired territory on 29 June, 1913.

One of Sofia’s main goals at the time was to push Serbia out of the modern-day territory of the Republic of Macedonia and annex the country to Greater Bulgaria. Although the month-long campaign ultimately failed, Bulgaria didn’t lose an ounce of its expansionist desire, which would soon be rekindled with World War I.

© REUTERS / Marko Djurica
Macedonian Conflict: The Pot of Arab Spring Boils Over the Balkans?
Bulgaria’s insatiable territorial ambitions against Serbia and Greece were the primary reason why it chose to join the Central Powers in World War I. This saw it temporarily succeeding in its quest to occupy Macedonia and forcefully claim it as part of Greater Bulgaria. The historical tragedy that the Macedonians had to endure during this time was lifted only by the war’s end in late 1918, after which it was liberated from Bulgarian control for over the next two decades.

History has an odd way of constantly repeating itself in the Balkans, and the last global catastrophe was no different. Bulgaria sided with Nazi Germany partly because it still desired to dominate Macedonia, and right after Hitler defeated Yugoslavia in April 1941, it sent its troops to annex the sought-after territory. The Macedonians proudly resisted and launched their National Liberation War against the occupiers, which continued until all Nazi and Bulgarian soldiers were finally evicted from the land.

Bulgaria is currently in pretty poor shape, both economically and politically. It holds the unsavory spot of being the EU’s poorest country, and hundreds of thousands of its citizens live as economic migrants in Western Europe.

Bulgaria’s government is also unstable, regularly undergoing various reshufflings and resignations. The current Prime Minister, Boyko Borissov, returned to office in November of last year and has since then placed his country on a dedicated anti-Russian course.

In fact, it’s because of his and the previous government’s obstinate stance in siding with Brussels and its restrictive Third Energy Package legislation that Russia was forced to cancel the South Stream pipeline and spearhead the Turkish and Balkan Stream projects instead.

© AP Photo
Macedonian Conflict: 'Greater Albania' Used by West to Destabilize Balkans
The Bulgarian public is understandably upset that the project was scrapped, since their impoverished country suddenly lost out on billions of dollars of revenue and investment. An exclusively commissioned Sputnik poll revealed that 64% of Bulgarians thought that the move would have a negative effect on their economies, and 66% of them believed that their country, not the European Commission, should have had the final say on whether or not Russia should have been allowed to build the pipeline.

Faced with such a growing revolt to his government’s economically suicidal anti-Russian policies, Borissov felt compelled to safeguard his administration by channeling the public’s growing outrage away from the authorities and towards an external crisis that could easily distract them, ergo Bulgaria’s growingly assertive stance and increasingly vocal nationalism vis-à-vis Macedonia.

It’s likely that Bulgaria’s resurgent nationalism is even encouraged by the West itself, which looks to have promised to turn a blind eye to such loud rhetoric in exchange for the country’s position against South Stream. After all, Brussels didn’t offer any economic relief to compensate for the gargantuan loss of investment that Bulgaria suffered when South Stream was cancelled, so it’s quite possible that distracting intangible benefits such as a carte blanche for nationalist expression were promised instead.

Furthermore, by returning to its role as one of the agitating actors in the Balkans, Bulgaria helps the West achieve one of its key geopolitical objectives in destabilizing Balkan Stream-affiliated Macedonia. The combined threats of Greater Albania and Greater Bulgaria weigh heavily on the Macedonia’s political leadership, which now finds itself between two pseudo-expansionist powers that evidently have a nationalist stake in the multicultural and unified country’s collapse.

Macedonia: The Ghost of a New Balkan War