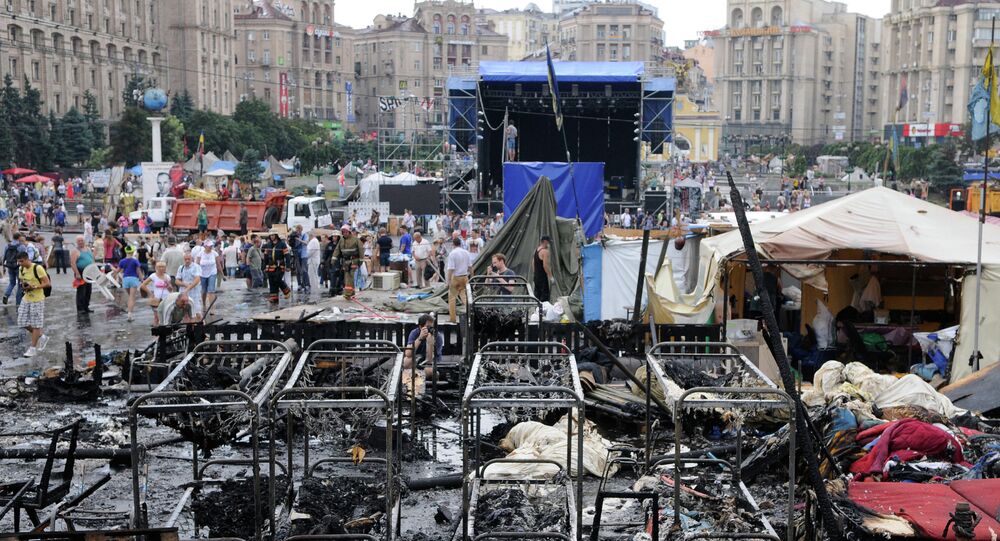 The beneficiaries of the Maidan revolution have codified their power and are set to govern 45 million Ukrainians.

WASHINGTON, December 4 (Sputnik) — The chosen ministers and the first legislation shows that Poroshenko and Yatsenyuk appear to believe that their constituents are western military and financial interests. The last year has shown little movement on improving the conditions of Ukrainians or solving the corruption problem.

With the approval of the new Ukrainian parliament after their victories in October, Prime Minister Yatsenyuk can finally get to work imposing their “shock doctrine” economics.

© AP Photo / Efrem Lukatsky
New Finance Minister Expects Ukraine to Resume Economic Growth in 2016
His first speech to the new Rada on December 2, promised that “the negative economic trend will continue” for at least six months.

He outlined an economic program that would transfer some central powers to regional governments, modify the tax code, and adopt a “law on the state budget — a very austere one — with cuts in budget expenditures on all possible items.”

Jaresko’s career in finance began at the U.S. State Department, where she served as the first Chief of the Economic Section of the U.S. Embassy in Ukraine from 1992 to 1995. More recently, she served as head of private equity firm Horizon Capital and simultaneously oversaw the $150 million Western Newly Independent States Enterprise Fund (WNISEF).

At Horizon Capital and WNISEF, Jaresko helped direct western financial involvement into the Ukrainian economy. She has already promised a “cost-cutting” budget for the people of Ukraine, which will no doubt include more profit for her investors.

Abromavicius’s career began in Lithuania, where after a short stint at Hansabank, he worked for East Capital, a private investment firm. The firm reportedly invested over $100 million in Ukraine in 2012.

© Sputnik / Aleksey Nikolskyi
Putin: Still No Signs of Western Efforts to Help Ukraine's Economy
The investments of the two firms are obviously paying off, as their partners are now part of the Ukrainian government.

“The economic situation,” says University of Montreal, Quebec, Professor David Mandel “is disastrous, much worse than most people imagine. GDP remains well below the level of 2008 when the world financial crisis hit and it is, in fact, receding. Meanwhile, Prime Minister Yatsenyuk has begun applying his “unpopular”, budget-cutting measures, which fall overwhelmingly on working people, whose wages are already low and who cannot rely on public services, since these are, in practice, only formally free.”

It seems that the problem that America and European powers had with corruption in Ukraine was not that it existed, but that they were not the beneficiaries.

Professor Mandel suggests that “while it is true that Ukraine’s political regime is less authoritarian than Russia’s, Ukraine’s oligarchic class has exploited and aggravated linguistic and cultural differences to gain advantage in its internal rivalry and to distract working people from its criminal activity. Maidan not only did not change this, but these tendencies have reached new heights in the ensuing civil war.”

Yatsenyuk has promised “radical and tough” changes, but his agenda has been tried before. Combining an unpopular austerity agenda, which destroyed the economies of southern Europe, with an ongoing civil war is a recipe for a dangerous situation with potentially global consequences.