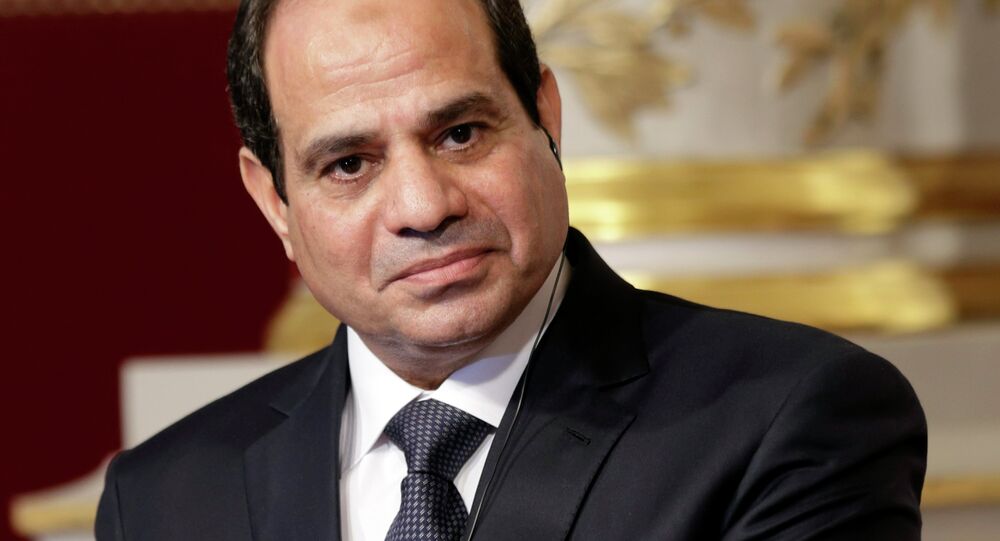 The recent visit of the Egyptian president, Abdel Fattah al-Sisi, to Paris was little reported in the Western press, even though the main subject of discussions between al-Sisi and the French president Francois Hollande was sensational.

© REUTERS / Kacper Pempel
Rioting in Warsaw: Many Hate the EU and Everyone Blames Russia
MOSCOW, November 28 (Sputnik) – The two men, as officially reported in the French media, discussed the jihadist danger coming from the new Libya – a recent product of the ‘colored revolution’ supported by an alliance of Western powers. Those who have a habit of reading old papers may remember that this alliance was headed by Mr. Hollande’s predecessor in the Elysee palace, Nicolas Sarkozy, and the still serving British Prime Minister David Cameron.

Readers should be reminded that under Libya’s previous ruler, Colonel Muammar Qaddafi, the country was far from being a democratic paradise, but was at least free of Islamist radicals. Mr. Qaddafi did not tolerate al-Qaeda operatives and other religious fanatics on his territory. After the start of the ‘revolution’ in Libya and especially Qaddafi’s murder by the Western-supported insurgents in 2011, the situation changed drastically. Islamists became a prominent force in Libya, and the country’s top leaders (described as ‘secular’ or ‘liberal’ by the American media) even pondered making sharia law the basis of the country’s new constitution.

“Egypt fears that the Islamist contagion may come to it from the town of Derna, a bastion of Libyan jihadists, which is located at 300 kilometers from the Egyptian border,” reports Le Figaro, a leading French daily newspaper. “There are about 3,000 radicals there who made a pledge of allegiance to the terrorist organization Islamic State in Iraq and Levant. Cairo fears transfers of arms and combatants from Libya to the Egyptian territory, and especially to the Sinai peninsula, a center of jihadist activity,” Le Figaro writes.

In an interview to Le Figaro, President Abdel Fattah al-Sisi blamed the Western powers for the state Libya is in and the ensuing dangers. “France, Britain and America had the responsibility to manage the transition of Libya [from Qaddafi’s regime]”, Sisi is quoted as saying. “But these Western countries never did it. By losing interest in the territory, where they themselves created a vacuum, the Western powers contributed to the creation of a chaotic situation there. Libya has 1,500 kilometers of sea coast. How could it be that the European countries with Mediterranean coasts tolerated all kinds of traffic from this territory? Human traffic, arms traffic drug traffic? How could they allow the creation of safe havens for terrorists?”

The Egyptian president knows what he is talking about – Egypt is not just Libya’s neighbor, but the foreign country that suffered most from the Western-supported revolution in Libya. Al-Sisi knows that the revolution in Libya was pretty much a result of a Western intervention in that country (NATO’s bombing raids saved the anti-Qaddafi jihadists from defeat by Qaddafi’s motorized columns in spring 2011). This intervention, in its turn, was facilitated by the toppling (again, with political and propagandistic support from the US and the EU) of the longtime Egyptian president Hosni Mubarak. “Until Mubarak’s fall in 2011, Egypt was the main player in the Arab League,” explains Mikhail Delyagin, a specialist in globalization studies and the editor-in-chief of the Moscow-based magazine Svobodnaya Mysl. “After Mubarak was ousted, Saudi Arabia and Qatar started to call the shots in the League, presenting their opinions as the ‘consolidated voice’ of the Arab world. Egypt was sidelined, and for a time, Obama and the EU’s leaders claimed to have all of the Arab world behind them.”

Later the same scenario repeated itself in Syria – the only difference being President Assad’s ability to stay in power. What began as ‘peaceful’ demonstrations against his rule, just as in Libya, quickly turned violent with support from Saudi Arabia and Qatar. They were followed by a civil war and a rise in jihadist activity.

So, in his talks with Hollande and subsequent interviews to the French media al-Sisi revealed a secret which many people (in France and elsewhere) already knew: the rise of jihadist activities in Libya destabilized territories far beyond its borders. The jihadists from Libya fought against President Assad in Syria, they were behind numerous terrorist attacks in Egypt’s Sinai and they contributed to terrorist activities in Sahel (especially in Mali, recently invaded by the Washington-supported French ‘peacekeepers’).

So much for “heroes of freedom struggle, Libya’s analogues of the [Afghan war hero] Massoud,” as the French ‘philosopher’ Bernard-Henri Levy called the Libyan insurgents against Qaddafi’s rule. Mr. Levy boasted of ‘talking’ Sarkozy into attacking Libya, since it was after his phone call that Sarkozy received ‘the new Massouds’ in his office and ordered bombing raids a few days later. In two years, Bernard-Henri Levy was raising the Maidan crowds in Kiev against Yanukovich – again with support from the Western government and with a similarly tragic result.

The share of the EU’s guilt in what has happened, as well as the share of the guilt of the US, is enormous. But will Sarkozy or any other Western leaders ever bear responsibility? Hardly. The brainwashed Western public barely even remembers the Libyan war, and it is even less capable of bringing the people behind the Libyan tragedy to account.