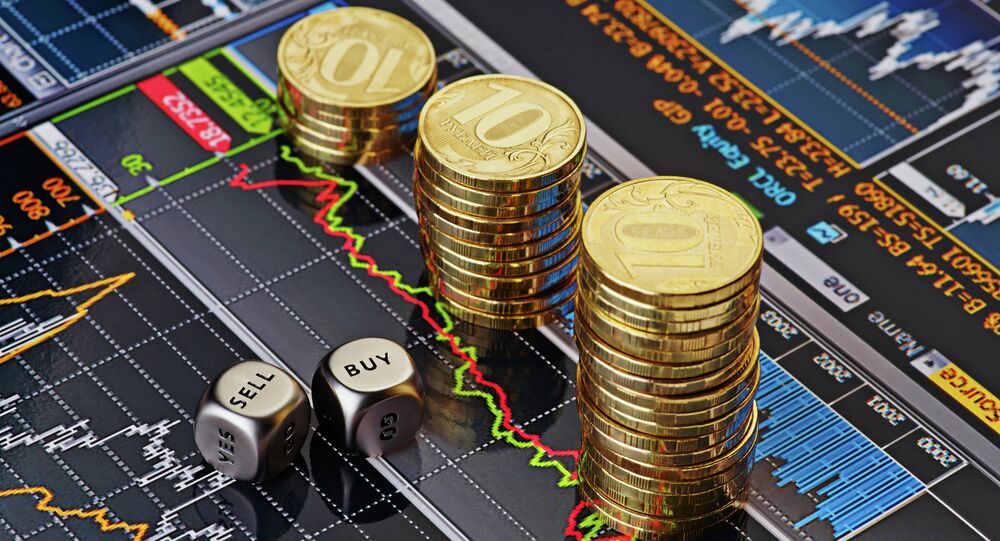 Crisis? What Crisis? There Is No Crisis Around the Rouble

At the worst point of the Depression Franklin Roosevelt rallied the American people by telling them they had “nothing to fear but fear itself”. That accurately sums up the state of play for Russia with the present rouble “crisis”. There is no rouble “crisis” and talk of one is groundless.

LONDON, November 19 (Sputnik) — Since the major market economies (of which Russia is now one) moved towards floating exchange rates in the 1970s, upward and downward movements in currencies have been commonplace. The dollar rate of sterling for example crashed from $2.40 to $1.70 during the 1970s.  It then spiralled upward in the early 1980s until it gradually fell back again. The British government then tried in the early 1990s to fix sterling to the Deutschmark within the so-called European Exchange Rate mechanism only to see it again crash spectacularly in 1992, taking the economic credibility of the government down with it.

Even before currencies became fully convertible, movements between them were by no means rare. Sterling for example was devalued against the dollar in 1931, 1948 and 1967.

The same is true of other currencies. If I have focused on the story of sterling it is because as a Briton I know it best, but also because historically it is the world’s oldest and most stable currency with a continuous history reaching back to the 6th Century AD. By contrast Germany, the country today held up as the poster boy for price and currency stability, has known two periods of hyperinflation and five currencies since the 1920s.

There may be some measure of truth to both claims but the reality is that whenever currencies fall in value in the way the rouble has done this year the fall invariably goes too far before it eventually corrects upwards. Currency movements are not an exact science and in these sort of conditions it is impossible to say with any certainty at what exact price market conditions will cause the rouble to settle when the process has run its course. Settle however it will and barring any further falls in the oil price, which for various reasons are unlikely, we are probably almost at that point now.

A factor that has contributed over the last few weeks to the rouble’s fall is that a number of Russian companies need before the end of the calendar year to pay instalments on debts they owe in dollars and euros to western banks. These companies have been converting roubles into dollars and euros to pay these instalments on their dollar and euro debts. This has been adding to the downward pressure on the rouble though in the nature of things it is a factor that can only continue for a few more weeks, yet it is difficult to quantify its impact.

Returning to the subject of Britain, one thing common to all sterling devaluations is that they have happened against a storm of apocalyptic predictions by the financial community, most of the media and many economists.

These predictions never come true. In every case when sterling has lost value the effect on Britain’s economy has turned out to be beneficial as the cost of Britain’s exports falls and the price of Britain’s imports rises. Inflation has risen a little but the damage from that has been small.

There is every reason to think the same will be true for Russia. Given that inflation in Russia has historically been higher than in Russia’s trading partners in Europe, the production costs of Russian companies have been rising faster than those of their European competitors. This explains why Russian companies have lost competitiveness against European companies, causing imports to Russia from Europe to rise. The fall in the value of the rouble, by cutting Russian industrial production costs relative to those of their European competitors, corrects this imbalance.

The air of uncertainty vis-à-vis Russia’s currency situation is linked to memories of what happened in 1998. Conditions however were very different then. The country’s debt was at catastrophic levels and the depreciating rouble meant it could not pay it. The result was default, which caused the banking system to crash and confidence in the financial system to collapse.

There is no danger of that today if only because the country is no longer a debtor, but a creditor.

Some Russian companies may struggle to pay loans they have taken out in dollars and euros, but one should not conflate the problems of individual companies with those of the country as a whole. The extent of Russian companies’ dollar and euro loans has anyway been wildly overstated, with possibly up to half of these “loans” being dollar or euro loans made through offshore tax havens by Russian companies (and their Russian investors) to themselves as a means of keeping wealth offshore and avoiding tax.

The sort of Russian companies that can borrow internationally large amounts of money in dollars and euros are anyway the sort of companies which trade internationally and which will therefore have part of their earnings and some of their savings in foreign currencies. They can draw on these earnings and savings to help tide them over until the situation settles.  If they need to borrow and western banks are closed to them, they can borrow either from Russian banks or (as is increasingly the case) in far eastern markets, which an increasing number of them seem minded to do.

Breathless predictions made by some western commentators that the Russian government would be forced to bail out these companies and that this would cause a collapse in the country’s foreign exchange reserves are far from true. The Russian government has made it absolutely clear it will not fritter away its reserves in this way. The companies have been left alone to sort out their own problems by themselves, as there is no doubt they both can and will. This is as it should be in a market economy such as Russia now is, where the government should concentrate on macroeconomic policy and not take responsibility for individual companies.

This is not to say the fall in the rouble has had no negative effects. It is the major reason for the sharp rise in inflation this year. This not only hurts household budgets, but also pushes back the government’s realization of its 4% inflation target, which it has identified as key to increasing rates of investment in the economy.

The delay however will only be temporary because the effect on inflation of the rouble’s depreciation is by definition a one-off factor, which once its effect has worked its way through, will no longer apply.

The fall in sterling’s value similarly caused inflation in Britain to rise in the late 1980s. It reached 10% at the time of Margaret Thatcher’s fall (the same as when she took power), despite her single minded focus on bringing inflation down. As in the case of Russia today this rise was however down to one-off factors such as the fall in sterling’s value in the mid to late 1980s. In the end Thatcher’s anti-inflation policies were successful.  Once these one-off factors had worked their way through inflation in Britain fell and has been low ever since.

With producer prices in Russia rising more slowly than before and the government saying that one-off factors such as a depreciating oil price and the import ban on food from the EU are responsible for as much as 4% of current inflation (currently around 9%), achievement of the 4% target may be closer than many think.

It is therefore simply wrong to treat this year’s fall in the rouble as any sort of “crisis”. On the contrary it is an entirely natural event consequent upon the fact that Russia today is a normal market economy whose primary exports, for historic reasons going back to investment decisions made in the 1960s, are energy products priced in dollars.

The only thing that could turn this entirely normal situation into a crisis is if the general population, still conditioned by the artificial price stability of the Soviet years and influenced by the financial crises of the 1990s, talks itself into believing that there is a crisis and rushes to change roubles into dollars in the mistaken belief that the value of the rouble is about to collapse as it did in 1998.

Such a response would be entirely irrational and would be a product of the sort of “unreasoning fear” Roosevelt talked about in his speech, mentioned at the start of this piece.

It has to be said that at the moment there is no sign of this. Notwithstanding some mendacious commentary in some western newspapers, there are none of the standard signs of panic (long queues outside banks, etc.) that one associates with this sort of thing.

Nor of course should there be. If one puts aside the factor of fear there are no objective reasons why there should be any sort of crisis. Just because the barometer points to rain does not mean we will all drown in a flood.