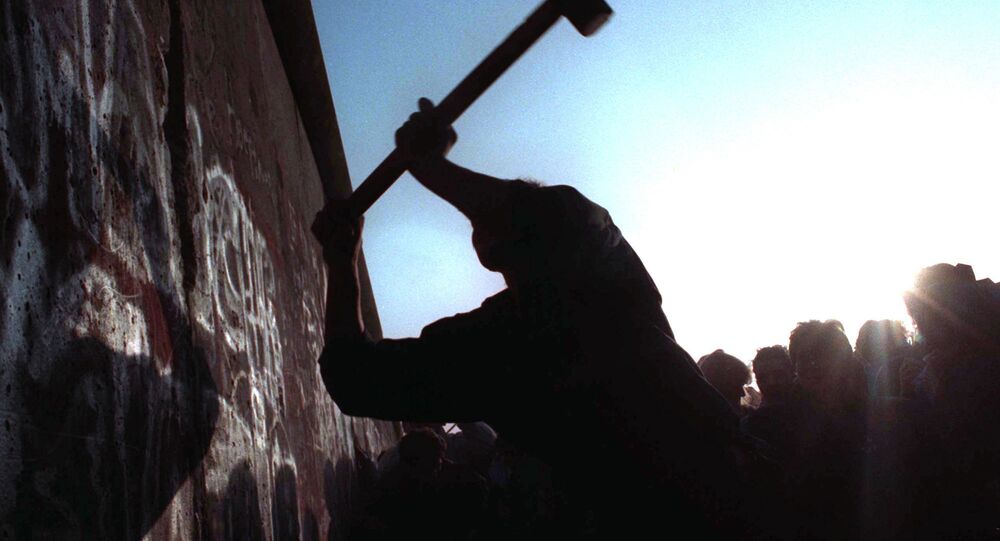 The fall of the Berlin Wall marked the end of the Cold War and the beginning of a long-awaited process of peaceful reunification between East and West Germany.

PHILADELPHIA, November 12 (RIA Novisti) — The stunningly rapid and non-violent collapse of an East German regime which, only a few years earlier, had become maybe the most perfect dictatorship in all of history, quickly came to be viewed as the endpoint of the Cold War, the moment when the decades-long East-West standoff was finally decided. It is true that the Soviet Union itself did not collapse for another few years, but once East and West Germany embarked on a process of peaceful reunification, it was clear that the other communist “satellite states” were doomed (and they indeed fell like dominos over the next few months). Amidst the euphoria, many analysts suggested that in the aftermath of the wall’s collapse, Western style democracy and capitalism were now the only games in town.

Because it was so quickly tossed onto history’s ash-heap, it’s worth taking a moment to remember just how rotten the old East German government actually was.

Through a shocking large network of informants and surveillance (catalogued beautifully in the movie "The Lives of Others"), the East German communist government had successfully crushed all signs of public opposition: the few people who took the risk of protesting openly were either incarcerated (often before being traded to the West for money and commodities) or into obscurity. That such a horrific government could dissolve overnight was a testament to the bravery and perseverance of Germans and of the endurance of human dignity.

History hasn’t turned out to be as simple as a lot of people expected in 1989. Far from “ending,” history actually seems to be returning with renewed vigor. Many things that were considered anachronistic as the Berlin Wall tumbled (religion, ethnicity, and nationalism among others) now lie at the center of intractable conflicts.
But outside of the wrongness of mass-surveillance and spying, what practical lessons can be drawn? Probably the single most important that I can think of is to “follow the people.” The single easiest way to judge a country’s performance is to look at how people are moving into and out of it: their numbers, their direction, and the rate of change.

The entire reason that the Berlin Wall was deemed necessary in the first place was because, when allowed freedom of choice, East Germans overwhelmingly wanted to be in the West. With each passing year, more and more East Germans not only decided that they wanted no part of the “workers’ paradise”, they took decisive action to leave it. The outflow was of such an enormous magnitude that it put the very survival of the East German system in doubt. And thus, in order to staunch the river of humanity leaking out of Berlin, the wall was built.

Any political-economic system that needs barbed wire, guard dogs, and snipers to keep its citizens from running away en masse will, in the end, prove unsustainable. The system might look like a monolith (as the East German system did) but it’s a monolith built on a foundation of sand. People are the most important natural resource, and if they are running away in significant numbers it’s a rather strong indication that something is going wrong.

Thankfully with only a few noteworthy and tragic exceptions (North Korea is the most dramatic outlier) the movement of people between countries today is more open and free than it has ever been before. Although there are still legal and bureaucratic hurdles to be cleared when migrating, such hurdles have always existed and this onus is usually placed on potential migrants by the country they want to live in. Currently no large or influential country attempts to exercise even a fraction of the control on movement that the Eastern Bloc did throughout the course of the Cold War. To the extent that the fall of the Berlin Wall represented the collapse of this system of control, it was a remarkable step forward in terms of human freedom and dignity.

Emigration is best understood as a symptom of much more serious underlying problems like unemployment, poverty, and political repression. Communist governments, in their characteristically blundering way, by and large attempted to treat the symptom rather than the disease. In the modern world, when it is ever more clear that people are a nation’s most precious natural resource and when demographic pressures are ever more acutely felt throughout the developed world, countries will compete to attract and retain workers in a labor market that is imperfectly but increasingly free.

Faced with such a situation, some countries might be tempted to build their own version of “the wall,” assuming that even a temporary halt in the flow of people will enable them to gain a bit of breathing room. They will learn though, as the East Germans eventually learned, that it is like trying to catch water in a sieve. Since 1989 history has stayed much messier than many anticipated, but one lesson from the fall of the wall is extremely straightforward: people will go where the opportunities are best for them, and woe to the governments that get in their way.