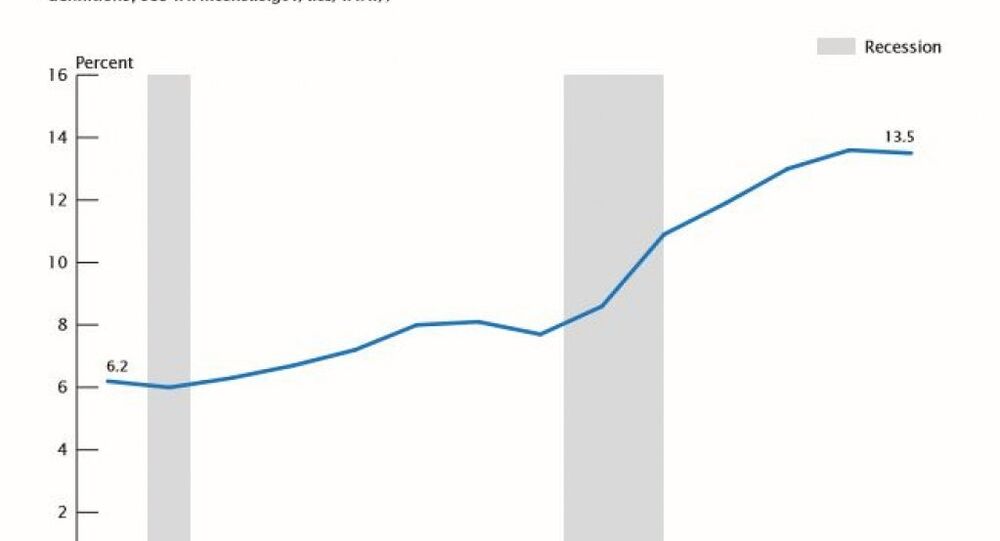 The Great Deception: For Many Americans, Great Recession Never Ended

Real wages continue to drop when adjusted for inflation; the cost of living continues to rise and the number of individuals that depend on financial help to put food on their tables has continued to increase since 2008.

This looks more like an economic hoax as opposed to economic recovery.

The Fed has created the illusion that all is well by boosting stock prices, by maintaining an ultra-low rate interest environment for an unprecedented period. This environment favours speculators and punishes savers. It forces savers to speculate or risk watching their savings lose value.

This chart from the Census Bureau illustrates how the situation has been getting progressively worse over the years and it’s not only restricted to the 2008-2009 time frame. This situation has been developing for a long time; even after the recession of 2001, the number of households on SNAP continued to increase, albeit at a slower pace, indicating that the recovery was favouring the richer classes only.

The effects were not as strong in 2001 as the recession was rather mild and the Fed did not have to create that much new money.  The approach to the 2007-2008 financial crisis differed; it required the infusion of massive amounts of money and the Fed forcefully contained interest rates for an inordinate amount of time. When you flood the markets with money, only the very wealthy benefit as it creates an environment that punishes savers and rewards speculators.

Must read: Oops we did it again: the Fed is setting the masses up for another stimulus programme

There is no economic recovery, just an illusion of one; the government is creating an alternate reality whereby they are trying to give the impression of an economic recovery; at worst it’s an outright lie as the middle class has been decimated and the poor are even poorer.

This fake recovery has favoured only the ultra-rich and large corporations; they have access to cheap money and have used these funds to speculate in the markets. Their investments have grown 100-fold since the recession began.

The US claims to have its people’s best interests at heart, but a close examination of the facts reveals that the government has been bought and paid for by the corporate world. Heads of governments are nothing but wenches of the corporate world, for the right price, they will do whatever their masters bid them to do.

We have the infrastructure of third world country; we do not rank in the top 10 when it comes to education, regarding happiness we no longer make it to the top 20 and regarding health care, we rank at the bottom in comparison to other industrialised nations.   All the money spent on wars since 2001 could have been deployed to retrain individuals, improve our education system, improve our infrastructure, thereby creating millions of jobs which in turn would lead to even more jobs. When people have money, they spend, and this paves the way for new business which creates, even more, jobs. However, this was abandoned for war as several key corporations stood to make billions and in the end, the corporate world is more important to the US government than its citizens.

Take control of your finances or they will control you

The government does not have your best interest at heart; they just want to make sure they have control of you.  The only way to break away from this prison is to take control of your finances. You need to understand that every financial crisis has been and will continue to be engineered in advance and this done to provide the ultra rich with the opportunity to buy top companies at rock bottom prices.

You can use this information to your advantage

Instead of panicking when the markets are crashing as they are doing right now in Jan of 2016, compile a list of the top innovative companies you would like to own.  Then deploy equal amounts of money into them and watch your capital grow over the years. We provide information on how to do this, join our Free Tactical Investor Newsletter to learn how to use psychology to always be on the right side of the markets.

This article is provided Courtesy of the Tactical Investor

Enough is Enough: US to Curb Debt Issuance in 2016