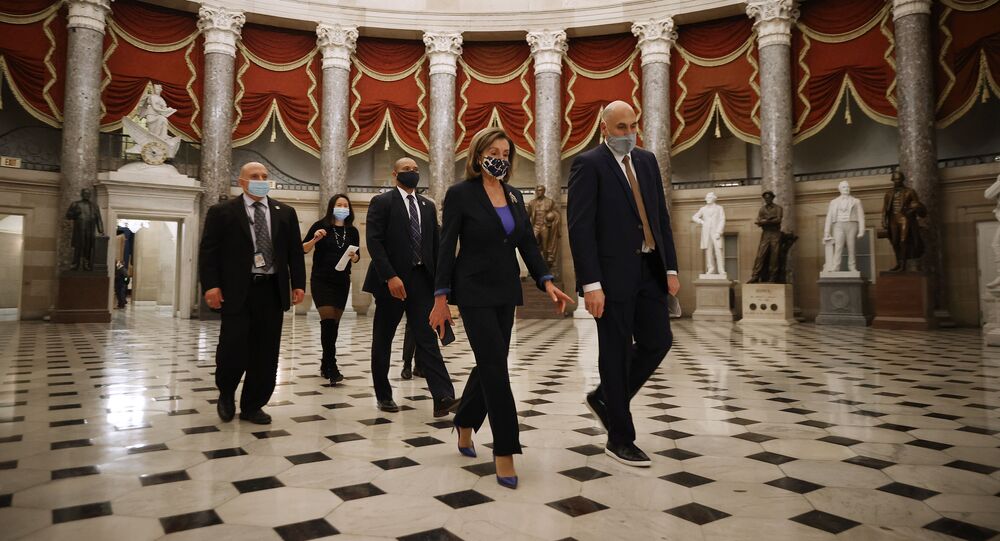 ‘The Democrats Are Afraid of Trump. They Want Him Banned From Re-Election’, Politician Says

The House of Representatives cast their vote to impeach President Donald Trump, declaring that he was guilty of encouraging violence and endangering the security of the United States. He will now stand before the Senate to face charges of “incitement of insurrection” following the mass protesting which took place at the US Capitol.

The House voted to impeach the President by 232 votes to 197, with ten Republicans twisting the knife into Trump’s back by voting against their leader in scenes similar to the Ides of March.

In what is being described as a trial motivated by hate rather than justice, Donald Trump must now await his fate. As he faces the prospect of not only being impeached but also the possibility of being banned from standing for election ever again.

Sputnik spoke with Councillor and former Mayor of Crewe and Nantwich, Brian Silvester, to ask just what precedent this trial will set if Trump is barred from running for re-election.

Sputnik: What are your thoughts on the vote to impeach President Donald Trump, especially the votes that came from his own Republican members?

Brian Silvester: The whole thing is a total farce that is just pure theatre. It clearly won't go anywhere. It's gone through the House of Representatives, but the Senate won't decide it until after the 20th of January. And then they need a two thirds majority to pass it, which I don't see them getting a two thirds majority. So the whole thing is theatre. But I'm very critical of the members of the Republican Party in the House of Representatives. There were 10 of them who voted for impeachment. Surely they should have some loyalty to the leader of their party. I would suggest to colleagues in America that when those 10 come up for election, they should be subject to a primary where they are voted out.

Sputnik: What precedence does this trial set with Trump now facing the prospect of being banned from standing for election again? Would you say that this seems to be the overriding motivation of the trial, to prevent him from having the opportunity of being re-elected?

Brian Silvester: America is in a very serious position at the moment because unless something is done, they're clearly heading for what, in effect will be a one-party state. They’re trying to stop, the Republicans doing anything at all. And they're cutting them off from all the social media, they're cutting them off from sources of finance, insurance, it really is very serious, what is going on and needs to be stopped. Because if it isn't, then America is finished.

Sputnik: Trump has also seen himself banned from various social media platforms, most notably Twitter, he has described this as an ‘unprecedented assault on freedom of speech.‘ What are your thoughts on this ban?

Brian Silvester: I think that it's quite wrong. And not just for America, but for the world, that a small group of private individuals because that's what they are, can actually be the judge and jury of what can and cannot be on social media. They have a virtual monopoly on social media, and anybody can be kicked off at any time. I've been suspended from Twitter for telling the truth.

Sputnik: Donald Trump has called for calm from his supporters in the lead up to Biden's inauguration. The vote to impeach him though is likely to spark feelings of unrest throughout the United States. Is it possible we will again see scenes similar to the ones we witnessed last week, and is this perhaps a sign of the support that the President still has from the people?

Brian Silvester: President Trump has always called for peaceful protests. And that's what he called for on the sixth of January, and the protests carried out in Congress were clearly infiltrated by Antifa and extremists, and that was clearly what was going on there. Trump did not call for any violence whatsoever. He never has done it and never will. And the trouble is that the violence is being promoted by the Democrats. When you look back to what happened over the summer, when there were riots and looting and setting fire to buildings and violence in cities all around America and all around the world. But in America, it was encouraged by the Democrats in some cases. The Democrats even offered to pay the bail of these rioters who are destroying their own cities. The Democrats are hypocrites on steroids.

Sputnik: Is the Democrats determination to see Donald Trump barred from re-election down to the fact that they see him as a threat to Biden's presidency If he was given the chance for re-election?

Silvester: I don't think there's any way they can stop Trump standing again. They're obviously afraid of Trump and his power to communicate with the voters in my view. He clearly won the election.