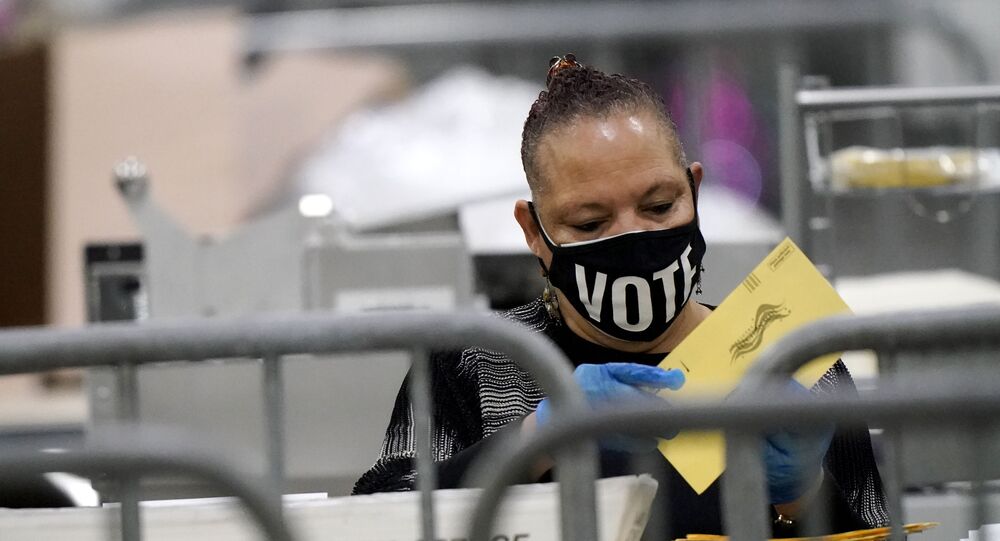 Senate Vote: Dems Managed to Flip Republican Areas, But GOP Has Chance to Get Them Back, Prof Says

Georgia is counting ballots following two runoff races that might prove to be game changers for a couple of years to come as they will define who takes the Senate – the GOP or the Democrats.

James Melcher, a political scientist at the University of Maine in Farmington, believes that the situation in the Senate will be reminiscent of the Obama era because the Republicans will try to foil the Democrats' plans, as opposed to proposing solutions. As a result, the parties will continue their "us-versus-them" confrontation.

Sputnik: Democrat candidate Raphael Warnock is expected to win one of the Senate seats from incumbent Republican Senator Kelly Loeffler. How important would this victory be for the Democrats?

James Melcher: They need the two to take control, but that's obviously a first step. He has great symbolic value. As the first black senator elected from Georgia, which has a large black population, was, of course, the state where Martin Luther King Jr. was working. So it's extremely significant. And even if they don't take total control, even winning the one seat may be able to help them win on some votes that are close. But they really need both seats to take control. And a lot of why taking control is important is the majority party controls all the committee chairmanships, all the subcommittee chairmanships and so on. So it's an important first step for the Democrats. But to really get a lot of what they want done, they need both of those seats and Ossoff right now is ahead by, I think, four tenths of one percent. And that's likely – that may be within the range in which Georgia has a recount. So we might not know the final outcome for a while.

Sputnik: The other Georgia Senate race – Republican David Perdue versus Democrat Jon Ossoff – is too close to call. What do you think the chances are for each candidate? When will we get the results, and what's the likelihood that this will result in a legal battle such as we have seen in the presidential election?

JM: I've seen some media organisations call the race for Ossoff. Some have said that the votes that are still outstanding are more likely to be in Democratic areas. What we always have to watch for is votes tend to come in precinct by precinct.  So some have called the race, some have not. It's likely that Senator Perdue would ask for a recount but you could still see the senator provisionally. And for example, in Al Franken's case – when Al Franken was in the Senate, if you recall Al Franken from Minnesota, the Republican was ahead on election night and was seated. And then after a recount, Franken won and went on to the Senate. So even if there's a recount, they may still be able to seat somebody. I think a recount in that second race is very likely. But the history in Georgia apparently suggests that recounts have generally not been successful.

President Trump, of course, asked for a recount in Georgia. They had two recounts done, one of which was a hand recount, and he didn't win in either one. So it would appear that the results, if it winds up that way, are probably going to remain even after the recount. But there are certainly still going to be manoeuvres. And we won't know for certain exactly how all of this has come out. And one other point to remember, though, is even if the Democrats take control of the Senate, which they would have because of Vice President Harris would be the tie-breaking vote, Mitch McConnell as what would then be Senate minority leader, still has a lot of power to block legislation through filibusters.

I think what we would be likely to see in the Senate if the Democrats take majority control, which is to say, if Ossoff also wins, I think some people I'm seeing online saying, oh, there won't be any legislation blocked anymore by Mitch McConnell. Don't be too sure about that because they're going to use filibuster aggressively on trying to block some of President Biden's agenda. Now, President Biden was in the Senate. He knows a lot of these people. He thinks he has good personal relationships with them. And we'll see how far that goes. But I think we're likely to still see Mitch McConnell and the Republicans use the filibuster to the best of their ability to try and block some of the things that President elect Biden wants to do.

Sputnik: If the Republicans manage to keep their seats in the Senate – or even one seat – what will be their long-term political strategy, in your view?

JM: In the Senate, we certainly know obviously we don't know who their presidential nominee will be in 2024, but I think it will look a lot like what it looked like during Barack Obama's time as president, that they're more likely to focus on blocking Democratic initiatives than offering their own. There may be areas in which they can cooperate with President-elect Biden, perhaps on COVID, on some of the COVID relief things might be things that they may be able to work on. But I think it's likely that they will be more an opposition party than one proposing a lot of their own solutions. I think it will look a lot like things did when Barack Obama was president back a few years ago.

Sputnik: How important is it for the Republicans to keep Georgia?

JM: It certainly is a sign that some states that had been reliably Republican for some time have been shifting. Some political scientists like Dante Scala at the University of New Hampshire have talked about how the suburbs of major metropolitan areas are getting to be more Democratic. And I think Georgia is a sign of that. You know, a lot of what produced some of these victories is some of the suburbs of Atlanta moving in a Democratic direction. It also shows the power of organising the efforts that Stacey Abrams has had in organising in and outside of the metro areas. I think these are bad signs for Republicans. And it's a sign that Democrats have figured out ways to make inroads in some places that Republicans have been counting on for a while.

© REUTERS / Jonathan Ernst
Georgia On My Mind: Biden and Trump Hold Rallies Ahead of Decisive Election for US Senate
12

Biden winning Georgia was the first and it was very close. And it certainly isn't as though it's gone over to the Democrats forever. They still have the governor. They still have a lot of the other elected officeholders there in Georgia. It's not as though they've permanently lost it, but I think it's a sign for Republicans that they may have trouble in other places. If Democrats have figured out a way to win there, it seems that could be some of the strategies they would use elsewhere. So I think it's definitely something that they should be concerned about, but it's not as though they never have a chance to get it back.

JM: If the Democrats have the majority, they'll have all those committees. That's the big thing – with the majority control is the chairs and the committees being able to schedule. There won't be another Senate election again for another two years. So they're going to have to deal with that. This is the last thing we've been waiting on the Senate because they have the runoff election. But I think a lot of the significance of this is for future races, that this might be a sign of things to come.

JM: That's a good question. There were a few people who said, we're going to show that we're angry by not turning out to vote for Trump that were Trump supporters, which would have been a very counterproductive thing. I think that a lot of people quietly blame Trump for these things, that some of the actions he's taken have been very controversial. But I also think many Republicans will be afraid to directly criticise President Trump in public. I think they are concerned about offending his supporters. His supporters are very passionate. Some of them are planning to gather to demonstrate in Washington. So I think privately, many of them may blame him, but I think that there won't be very many Republicans who will say so out loud in public.

Sputnik: How would you assess Donald Trump transformed the Republican Party during his four years presidency? What we will see in this post-Trump era?

© REUTERS / Evan Vucci
With Trumpism Set to Become a Lasting Political Philosophy, Will Ivanka Run for President in 2024?

In some ways, it's hard to tell how permanently those changes are going to go in, but I think that he has changed the way Republicans engage in dialogue, that I think that they've gotten to be more rigid, more and more likely not to cooperate with Democrats. I think he's moved the Republican Party in a more confrontational us-versus-them sort of direction. And I think a lot of that is going to last for a while. I don't think even after he leaves office, I think that some of those effects on the Republican Party and who he's brought into it are going to remain after he leaves.