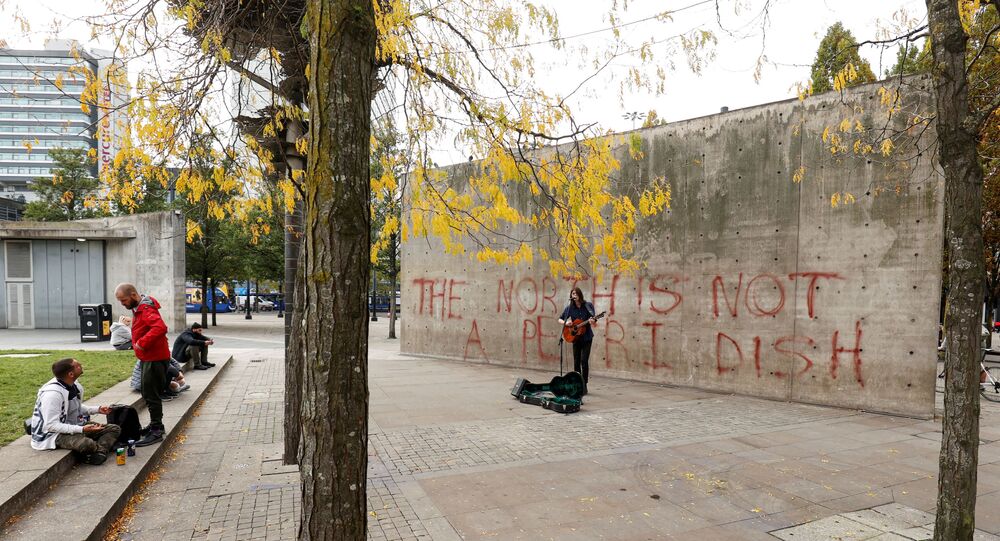 Nearly half of England’s population will be put into lockdown from Saturday, despite rising tensions in the north of the country between regional leaders and the central government. This comes as the mayor of Greater Manchester attacked the new lockdown measures, warning that jobs and businesses in the North must not become “a sacrificial lamb”.

According to Ryan Swift, a researcher in politics at the University of Leeds, the northern "revolt" has been brewing for quite a long time and became especially noticeable amid the coronavirus pandemic.

Sputnik: Obviously these recent events follow the news surrounding COVID, but has this northern revolt been a long time coming for the government?

Ryan Swift: I think it has been bubbling to the surface for quite a few years. The North's got its political agenda with northern powerhouse ideas and then at the general election last year, talk around the red wall, and so on.

There's also been a growing sense of frustration in the North, I think, and more of a pan-northern cooperation when it comes to expressing these views. We've seen newspapers across the region come together, calling for the North to be powered up. So, I think it has been bubbling away for a while, but I think with the gravity around COVID-19, that's what's been so significant at the moment and the way it's increasingly cross-party on some of these views is quite striking too.

Ryan Swift: I think longer term, not just on COVID, but on other policy areas, the government might have to start listening to the north more seriously and that's just within its own party. We've seen the setup of the Northern Research Group, a group of Conservative MPs who are going to be pushing the government to deliver more for the North, because they'll be worried about keeping the seats they gained in the North at the next election. I think that'll be significant. More generally, if this kind of northern consensus and frustration holds and grows, then I can't see it making the government's job any easier when it comes to dealing with the North.

Sputnik: Is there a risk that the strong approach from Burnham, and the new COVID restrictions, could lead to disagreements and division between northern regions?

Ryan Swift: There's always some disagreements and competitions within the North and of course there will always be cross-party disagreements on other issues, but I think there is a kind of consensus around the way the North has been treated in recent weeks regarding the pandemic; the kind of leaking to the press without talking to leaders, and the sense that the North's been treated unfairly and not getting 80% furlough that the rest of the country got during the early days of the pandemic.

I think maybe if there's a disagreement, I think that will be stoked by the central government. We saw that when Boris Johnson was announcing on Monday that the Liverpool City Region would be moving into tier three, because he was trying to co-opt Steve Rotherham and the Liverpool City Region, saying that it had been agreed between government and Liverpool, but Rotherham later denied that and said it was imposed and that he had no choice.