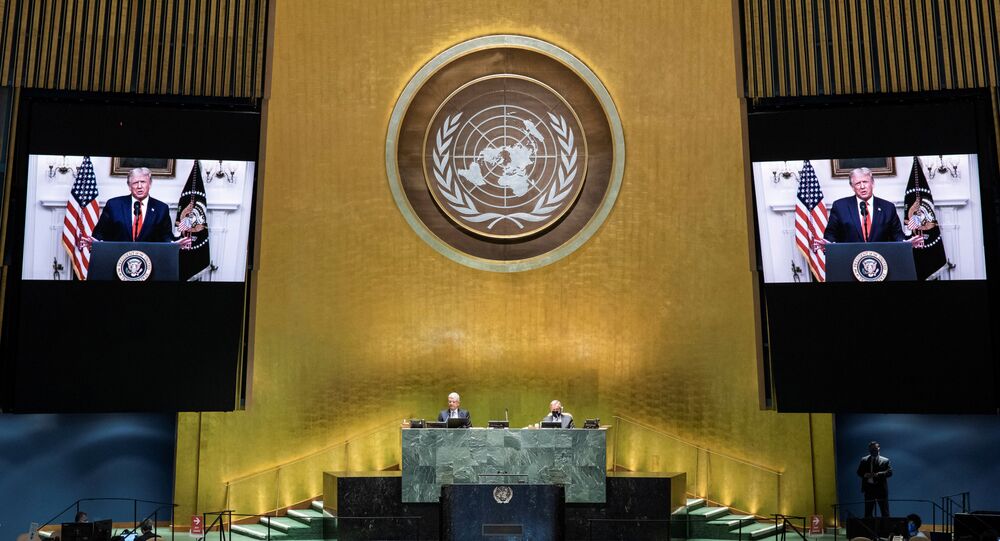 As the 75th edition of the United Nations General Assembly (UNGA) kicked off in New York on 21 September, foreign affairs analysts opine that the UN-backed multilateral world may well crumble, mainly due to US President Donald Trump’s harsh stance on the international organisation.

The multilateral world order that underpins the UN is on the verge of breaking down due to the actions of the US under President Donald Trump, warns former Indian diplomat and co-founder of the Mumbai-based think tank Gateway House, Neelam Deo.

“The American President doesn’t respect multilateralism. The system is straining as a result of his actions,” Deo told Sputnik, as world leaders took part in the first virtual meeting of the 75th Session of the UN General Assembly (UNGA 75) on Wednesday.

During her almost four decade-long diplomatic career, Deo has had two diplomatic stints in the US as well as served as India’s Ambassador to Denmark, among other official assignments.

She underlined that the Trump administration’s decisions to pull out of three UN bodies (UNESCO, UNHCR and WHO) and threats to cut funding to others will have a direct bearing on the United Nations as an institution.

“The US has been the biggest funder of the United Nations. It will be directly culpable for its decline by stopping funding [to UN-linked global organisations],” lamented Deo.

The US contributed nearly $10 billion, or almost a fifth of the UN’s budget, in 2018, according to data from the Council on Foreign Relations (CFR), a New York-based think tank.

The former Indian envoy highlighted that other major powers would be hard-pressed to fill the shoes of the US.

“Even though China said it would fund the World Health Organisation after President Trump announced that he would pull the US out, the fact remains that the funding Beijing offered was less than half of what the US had been contributing annually,” she said.

Despite calls by China advocating multilateralism, Deo opined that Beijing’s actions don’t match their words, as they only want to ‘preserve’ the current system.

© REUTERS / TOM BRENNER
Trump: UN 'Must Hold China Accountable for Their Actions' Regarding Coronavirus Pandemic
“China has been the biggest beneficiary of the multilateral system. They have gamed the UN to their advantage, be it the World Trade Organisation (WTO) or the WHO,” remarked Deo.

Dr. C. Vinodan, the Director of the Institute of Contemporary Chinese Studies at Kerala’s Mahatma Gandhi University, told Sputnik that China wanted to create a ‘bipolar’ world order and a ‘unipolar Asia’, which is very different from what India has been striving for.

“While President Xi bats for multilateralism, he also doesn’t want any changes to the existing system. China is just trying to move into the space being ceded by the US,” reckoned Vinodan, who has also authored several books on India’s foreign policy challenges.

The Chinese affairs expert cautioned that a ‘new world order’ was almost upon us, abetted by America’s actions.

“This is also the best time to cooperate and create a new multilateralism. But that can’t happen unless the US and China fully cooperate with other powers. Both of them must be willing to share power. That’s how multilateralism works,” he said.

He added that Beijing’s unilateral actions on the global stage and in its neighbourhood don’t make it a ‘reliable’ world leader, despite what's said by President Xi in his speeches.

Bill Sharp, a Visiting Scholar at the National Taiwan University and an East Asian Affairs expert, also expressed his dismay over the Trump administration’s consistent threats to withdraw from the UN bodies.

“The US lack of support for the UN's precursor spelled the doom of the organisation,” Sharp told Sputnik, recounting the League of Nations. He added that the only way to preserve the legitimacy of the UN was to reform the Security Council.

“The UN needs restructuring. The Security Council should be extended to include India, the EU and Japan,” suggested Sharp.

Professor Harsh Pant, a Director at the Observer Research Foundation (ORF), a New Delhi-based think tank, told Sputnik that “issue-based coalitions” between countries could be the way forward in the absence of a clearly-defined multilateral order.

© AP Photo / Saurabh Das
Indian Prime Minister Stresses Need for UN Reform
“While Americans don’t seem to really believe in multilateralism anymore, the Chinese have been the biggest beneficiaries of the order. Now, China wouldn’t want any global reforms to multilateralism for obvious reasons,” reckoned Pant, who heads the Strategic Affairs Programme at the ORF.

Pant fears that attacks by the US on the UN and multilateralism won’t stop, even if Trump's Democratic rival in the presidential race, Joe Biden, comes to power in the US. “Both Democrats and Republicans view multilateralism with suspicion,” he said.

The strategic affairs expert further noted that unlike in the past, developing countries including China and India were no longer on the same page when it comes to the issue of trade. “The global order is in for a transformation. The post-COVID world will be very different,” he suggested.