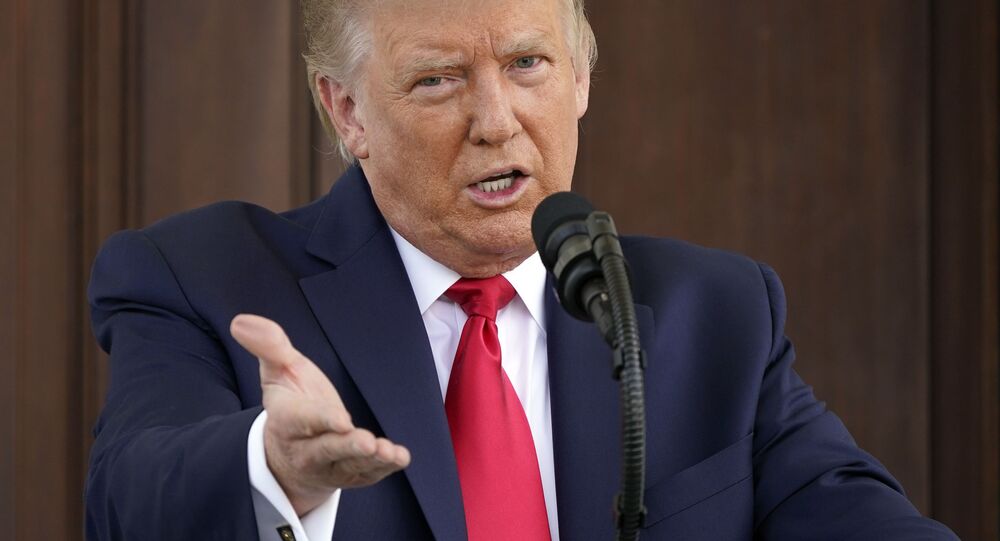 ‘All Over the Place’: Trump Alternately Praises, Disparages Military to ‘See What Sticks’ - Journo

US President Donald Trump is “all over the place” when it comes to the military, pushing back on reports he had called fallen troops “suckers” and “losers,” and continuing military operations even as he says the country’s long wars should end, Ted Rall, a columnist and syndicated editorial cartoonist, told Radio Sputnik’s Political Misfits.

In an article published in The Atlantic on September 3, the outlet’s editor-in-chief, Jeffrey Goldberg, quotes various anonymous sources claiming that the US president had repeatedly disparaged service members. For example, Goldberg claims that Trump canceled a visit to the Aisne-Marne American Cemetery near Paris in 2018 and had said: “Why should I go to that cemetery? It’s filled with losers.” In another instance, Trump allegedly referred to the more than 1,800 US Marines who died at Belleau Wood in World War I as “suckers.”

“First and foremost, we have to remember the source of the Atlantic article, Jeffrey Goldberg, is what we call in fiction an unreliable narrator. It’s the same guy, back in the build up to the Iraq War, that actually posited something that was not only not true, but could not have been true, namely that [former President of Iraq] Saddam Hussein aligned with al-Qaeda. Considering that they were mortal enemies, that could not have been true,” Rall told hosts Michelle Witte and Bob Schlehuber Tuesday.

“Goldberg’s been in service of the national security state for many, many years,” Rall noted. “That said, I think everybody is sort of taking it for granted that Trump said what is alleged.”

On September 4, Jennifer Griffin, a Fox News national security correspondent, tweeted a long thread claiming that she had spoken to two former Trump administration officials who confirmed that the president had “disparaged veterans.” Trump retorted on the same day by tweeting that Griffin “should be fired for this kind of reporting.” Over the weekend, Trump again took to Twitter to accuse the Democratic Party and “fake news” media of orchestrating a disinformation campaign against him ahead of the November presidential election.

During a Labor Day news conference at the White House, Trump once again pushed back against the allegations in Goldberg’s article, stating that American soldiers are “in love” with him.

"I'm not saying the military’s in love with me, but the soldiers are. The top people in the Pentagon probably aren’t, because they want to do nothing but fight wars so that all of those wonderful companies that make the bombs and make the planes and make everything else stay happy. But we're getting out of the endless wars. You know how we're doing,” the president said, the Independent reported.

“Trump is all over the place when it comes to militarism,” Rall pointed out.

“I mean, he has expanded [former US President Barack] Obama's drone wars. He backed the Saudis in the proxy war in Yemen. He’s been active in Syria on both sides, kind of. He’s all over the place … The sense I'm getting is of a commander-in-chief who is pressured by what people in the military call guys wearing a lot of lettuce, you know, all those decorations,” Rall noted.

“It’s almost as though Trump just throws a lot of stuff at the wall to see what sticks, and then whatever works, he repeats. Whatever doesn’t work, he shies away from,” Rall added.