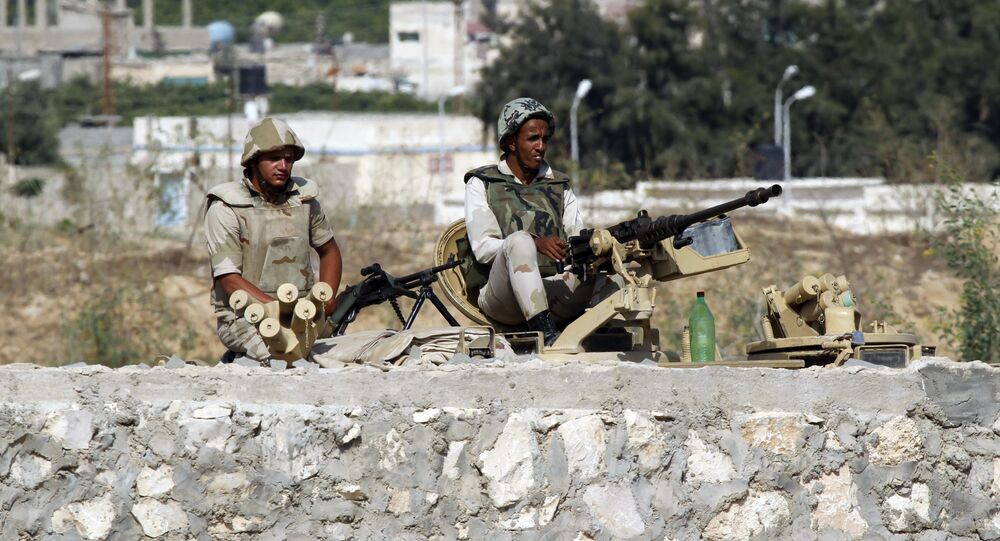 Although Egypt's parliament has given its approval to send troops to Libya, citing Cairo's security concerns, a former aide to the Egyptian foreign minister says his country will not rush into battle and will prefer to exhaust all diplomatic options before engaging in a bloody conflict on foreign soil.

While forces loyal to the Government of National Accord, backed by the UN and Turkey, have vowed to liberate Libya's Sirte, reports are emerging suggesting that the GNA army has dispatched a large number of vehicles to the area in an attempt to capture it from the hands of General Khalifa Haftar and his Libyan National Army, supported by Egypt and the UAE.

But the LNA is not planning to sit idly by and watch their control over the area evaporate, especially as they realise the importance of Sirte and its strategic position in the region.

Sitting right in the middle of Libya's coastline, Sirte is the gateway through which 60 percent of the country's oil is flowing and it is where ports such as Sidra and Ras Lanuf are located, from which the crude is taken to international markets, enriching the Libyan economy with billions of dollars annually.

It holds a symbolic significance too. Traditionally associated with forces loyal to deposed leader Muammar Al Gaddafi (and after he was gone - with General Haftar), the fall of Sirte could deal a devastating blow to the morale of the LNA from which they might not be able to recover, and that could explain the reason behind General Haftar's determination to keep the GNA at bay.

But Haftar is far from the only player that's interested in keeping the reserves of the oil-rich city in their hands. Neighbouring Egypt has expressed similar views, with President Abdel Fattah Al Sisi warning in June that his country could intervene in Libya if the GNA and its ally Turkey follow through on earlier threats to seize control over Sirte.

A month later, Al Sisi showed that he was dead serious about his previously voiced warnings. A week ago, the Egyptian parliament authorised the deployment of the country's armed forces to Libya and although a date for a potential offensive was not given, Gamal Bayoumi, a former assistant to Egypt's Foreign Minister, said the aim was to send "a clear message to LNA and their allies that nobody should be threatening his country's national security".

Cairo, whose stability has deteriorated following the ouster of former President Hosni Mubarak in 2011, has faced an acute problem of terrorism and the Egyptian authorities have long blamed the insurgency in Libya for the dire security situation in their country.

After coming to power in 2014, President Al Sisi vowed to restore Egypt's security and put massive effort into securing the 1,115 km long border with Libya to prevent a situation where the chaos would spill over onto the Egyptian territory.

But as Daesh* raised its head in the war-torn country, staging multiple attacks on Egyptian civilian and security targets, Al Sisi soon realised that he didn't have any other choice but to strike back.

Similar attacks have been carried out in the following years too, drawing criticism from human rights groups that have accused Cairo of war crimes and of indiscriminately targeting civilians, allegations rejected by Bayoumi, who says his country was only protecting its own national interests.

"We have one of the biggest armies in the region and we are serious when we say that we will use our force but our military's goal is not to attack but to defend thousands of Egyptian citizens stationed in Libya", Bayoumi said over the phone.

Opting for Diplomacy, Not War

However, Cairo's concerns are not limited to national interests only. Feeling challenged by its regional rival Turkey, which has provoked Egypt's anger in the past for the support it gave to the Muslim Brotherhood movement that is outlawed in the country, Ankara has also drawn criticism following President Recep Tayyip Erdogan's decision to send his troops into Libya and provide the GNA with military and intelligence support, thus challenging Al Sisi.

"Ankara's expansionist ambitions need to be kept in check. We want to avoid a situation, where Libya is broken into small fractions, divided between Turkey, Daesh* and other players; and while we will not hesitate to use our force, especially given the fact that the Egyptian public as well as international and Arab leaders gave us the mandate to do so, using boots on the ground will be [the] Egyptian government's last resort, if all other methods to achieve stability fail".

The last round of these efforts was observed last week, when Russian officials met with their Turkish counterparts in an attempt to end the bloody conflict that has been raging in the country since 2011 following the toppling of Muammar Gaddafi.

But given the fact that previous rounds of negotiations resulted in little implementation of the agreements on the ground, the chances are high that Libya's saga will continue to grab headlines in the near future.