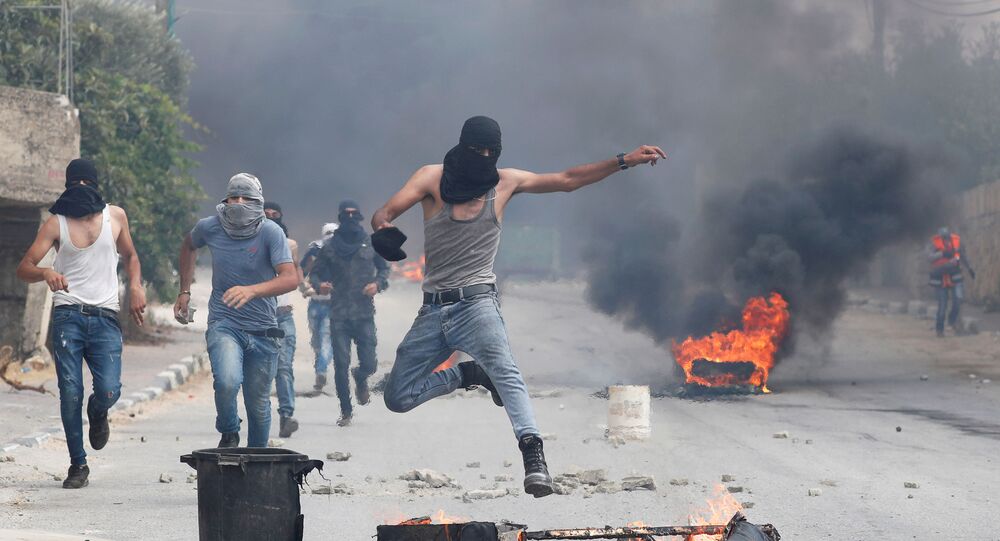 Scholar: Two-State Solution Irrational & Won't Achieve Peace as Palestinians Not Interested in it

While the Arab world and the international community have called on Israel to adopt a two-state solution to end the conflict with the Palestinians, an Israeli professor claims the notion is not more than a fiction coined by Arabs to distract the globe from their true intention - the annihilation of the Jewish state.

US President Donald Trump's "deal of the century" peace plan might be off the table for now, but the notion of the two-state solution that his initiative resurrected is still capturing the minds of many around the world, who believe it is the right answer to a decades' long conflict.

In 2019, it was the Egyptian president Abdel Fattah Al Sisi, who urged both sides to endorse the establishment of a Palestinian state alongside Israel; in May, it was the Jordanian monarch Abdallah II, who said that it was the only way for everyone "to be able to move forward," whereas international leaders have made similar statements too, urging the rivals to sit down for negotiations.

Even within Israel, the two-state solution has become a notion popular among the masses.

Although a poll from 2018 indicated that the support of the notion has dropped from 46 percent to 43, the lowest point in the past decade, the fact that nearly half of the population favours the partition of land and the establishment of an independent Palestinian state is still indicative of the popularity of the concept.

The Two-State Solution is Fiction

But for Prof. Abraham Sion, a former chair of the Centre for Law and Mass Media at Ariel University, this concept is void of any meaning.

The notion appeared on the horizon after the historic Oslo Accords of 1993, says the professor. Back then, Israel and the Palestinians inked a number of agreements that established the Palestinian Authority and that were aimed at creating an independent state within a span of several years.

"The idea was to bring peace to the area, and [then leader] Yasser Arafat promised that all disagreements between Israel and the PA would be solved through talks, not violence."

Many believed that that would be the case. Shortly after the signing of the Accords, 61 percent of Israelis supported the idea but the changing reality altered that trend. Despite promises, loud words and multiple meetings, peace never came to the region, while violence and attacks have only grown in numbers.

According to official statistics, in five years since the Oslo Accords, more Israelis have been killed by Palestinian terrorists than in the 15 years prior to the agreements, with the country registering hundreds of deaths and injuries.

The eruption of the Second Intifada in the early 2000s only aggravated the tensions. During the five years of severe confrontation, militants conducted hundreds of terror acts that killed more than a thousand Israelis. Many others were severely injured. The fighting has also claimed the lives of over two thousand Palestinians.

Over the years, Israel managed to curb the threat of terror, erecting its West Bank barrier and arresting hundreds who have been involved in the insurgency. Attempts have also been made to settle the disagreements peacefully, with Israel and the PA sitting down for a number of talks.

But, Sion says, all efforts were fruitless. "The agreements didn't bring peace to the region. Instead, they cherished the hope among the Palestinians that the Jewish state could be annihilated with some patience and time; with the PA leadership making zero attempts to improve their education system, that has long been breeding hatred to Israel and the Jewish people."

Sion was far from the only expert making these claims. In 2019, for example, IMPACT-se, a research institute based in Jerusalem, published detailed research showing that Palestinian schoolchildren were exposed to a dramatic amount of incitement and intolerance against Jews and Israel in their textbooks.

Similar accusations have also been made by the European Union, that blamed the PA for using a radical curriculum that incited enmity towards the Jewish state.

"When you teach your children that their biggest achievement in life is to become martyrs and kill as many Jews as possible, you realise that the notion of peace is as remote as ever before," said Sion.

The West Mesmerised by the Irrational Concept

Nevertheless, the international community, he claims, doesn't seem to understand it; while the slogans coined by Palestinians talk about peace, the withdrawal from the West Bank and a two-state state solution seem to catch the attention of the global audience.

In Israel too, many are mesmerised by these concepts, believe Sion, but for him going back to the 1967 borders and disengaging from the West Bank are certainly not an option.

"First of all, following the ceasefire of 1967, the UN Security Council never specified which of the captured territories Israel should be leaving," he said referring to the Six-Day War, when the Jewish state conquered the West Bank, the Golan Heights and the Sinai peninsula from Jordan, Syria and Egypt, respectively.

"Lastly, pulling out from the West Bank [even if Israel was ordered to do so - ed.] is irrational. Look what happened, when we withdrew from Gaza," he said alluding to ,2005 disengagement plan after which Hamas seized control over the Strip and intensified its assaults on the Jewish state.

© CC BY 2.0 / DAVID HOLT / Hezbollah flag
Top US Commander Warns Hezbollah Against Making ‘Great Mistake’ of Attacking Israel
And while a two-state solution is not on the table, Sion believes that the end to the Israeli-Palestinian conflict is possible through giving Palestinians autonomy on the territories they are currently in, where they would be able to "rule their own destiny but would be void of political aspirations".

"This solution will benefit everyone, politically and economically speaking, and will bring the much-needed peace," he reassures.